Myth vs History: A Study of Vietnam War Stories and Journalism

Jerry Lembcke is the author of eight books including The Spitting Image: Myth, Memory, and the Legacy of Vietnam, CNN’s Tailwind: Inside Vietnam’s Last Great Myth, and Hanoi Jane: War, Sex, and Fantasies of Betrayal. His opinion pieces have appeared in the The New York Times, Boston Globe, San Francisco Chronicle, and The Chronicle of Higher Education. He has been a guest on several NPR programs including On the Media. The 2006 film Sir! No Sir! featured his book The Spitting Image.

Lembcke was drafted in 1968 and served as a Chaplain’s Assistant with the 41st Artillery Group in Vietnam. He is presently Associate Professor Emeritus at Holy Cross College in Worcester, Massachusetts, and Distinguished Lecturer for the Organization of American Historians. 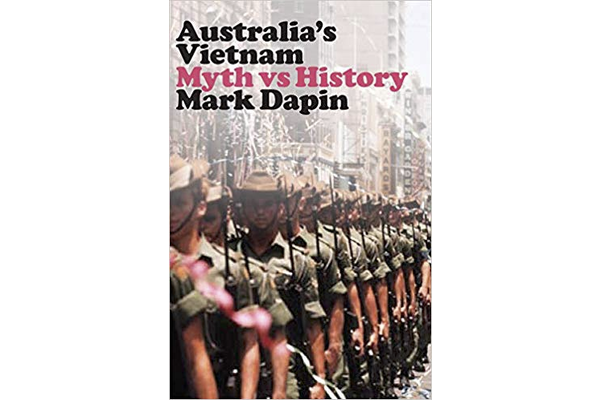 In 2007, I presented a paper on the myth of spat-on Vietnam veterans at a Queensland University conference in Brisbane, Australia. The paper drew on the history of homecomings experienced by U.S veterans of the war; it was well received by the attending historians, most of whom were Australians.

In the Q&A that followed, however, assertions were made that the Australian case was different: Australian returnees, it was said, were met with great hostility and even acts of spitting by the antiwar movement. My surprise at hearing that claim was then surpassed by the acceptance of its merit by the roomful of scholars. With the unspoken certainty of something everyone-knows-is-true filling the room, the story of spat-on Australian veterans went unchallenged into the end of the session.

Later, over drinks and dinner, my probes into what research had been done by historians and students of political culture on the Australian homecoming experience hit a wall: It’s common-sense, isn’t it? The antiwar movement hated the war and the military establishment—why wouldn’t they spit on the “diggers” when they came home?

I returned to the States as certain that there was an untold story in the Australian memory of Vietnam veteran homecomings as I was when began writing The Spitting Image: Myth, Memory, and the Legacy of Vietnam. Alas, my pursuits of appointments and funding that would take me back to Australia to do that work were fruitless. Recently, I picked up Mark Dapin’s Australia’s Vietnam: Myth vs. History and it dispelled my lingering disappointment at the lost chance to interrogate some Australian coming-home-from-Vietnam stories. More importantly, Dapin does it in a way that advances the craft of myth-debunking while using his own growth from mythmaker to myth-breaker to show us what intellectual integrity looks like.

Dapin keeps himself on solid methodological ground throughout the book with repeated acknowledgements that he, the myth-debunker, cannot prove the negative, cannot prove what did not happen. But he can show what did happen: that hundreds of thousands of people turned out in 1966 and 1977 to welcome veterans home to Sydney, establishing as a myth the now-widespread claims that there were no “welcome home parades”; that government documents and official correspondence clearly record the obligation to serve in Vietnam when ordered, giving the lie to claims that Australia’s troops there were “an all-volunteer army”; that the first claims that returnees were called “baby killers” came in 1997, about thirty years after they came home.

Dapin takes the show-what-did-happen tactic to a higher level to attack the now-remembered demonstrations that greeted troops returning to Australian airports. So threatening were those demonstrations, it is claimed, that Qantas Airlines flights from Vietnam landed at night to thwart protester’s plans to assail the veterans. The truth, writes Dapin, is more prosaic: nighttime flights allowed Qantas to maintain the scheduled maintenance of the planes needed for daytime commercial flights.

Australia’s Vietnam is more than an empirical inquiry into the truth, say, of stories that Australian troops committed My Lai-type atrocities in Vietnam: did they happen or didn’t they? They didn’t, Dapin says, and the “memory” that they did began with a book published in the US. Dapin describes the book, Happy Hunting Ground by Martin Ross, as a former Marine “eager to impress his readers with the dangers and hardships he ostensibly faced while wandering around South Vietnam as a journalist. . . “(p. 110). Made-up atrocity stories function, as do other myths in Australian post-Vietnam folklore, to bolster the combat bona fides of Australian veterans by associating them with the imagery of American veterans ginned up by Hollywood.

Australia’s Vietnam is important for the rectification it brings to public memory of Vietnam War homecomings. It’s relevance for Australian readers goes without saying and used in critical dialogue with the American war-story literature it should find its place on those lists as well.

But the book is equally important as a case study of journalists’ role in mythmaking. Dapin’s first chapter, “The Myths I Helped to Make,” is one of the best in the book. Told by members of a veterans biker club that 90% of them have PTSD, that others were spat on, sleep with pick-handles under the bed, live in isolated camps in the bush, or carried a bag of Vietnamese heads in Vietnam—he believed many of them and wrote some them into print. The journalistic malfeasance that Dapin owns-up to now is more than made up for by offering himself for study in why journalists believe what they do. Phenomenologists have covered a lot of that ground that Australia’s Vietnam would be stronger for having referenced but schools of journalism can make the necessary accommodations for that.

Afterword. At the Brisbane conference mentioned above, I also recounted my R&R experience in Sydney in July 1969. Coming down the steps to street-side from my Kings Cross hotel, I was greeted by a young woman. “Are you a GI?” she asked. Tanned (in the Australian winter) with no hair, I confessed immediately. “Would you like to go to a coffee house?” she asked. Agreeable to that, I walked a short distance with her to a coffee shop (and perhaps bookstore) stuffed with antiwar literature and paraphernalia. There, I was offered sanctuary if I wished to desert, and eventual passage to Sweden for more long-term refuge. I left with a stack of printed material that I passed around the 41st Artillery Group upon return to Vietnam and a heavy-metal peace symbol which still hangs on my dining-room wall. The Brisbane conferees had “no idea” that Australian peace activists had reached-out to GIs and even admitted to hunches that protesters would have been hostile to GIs. It was, after all, 2007 and years before they would see Dapin’s myth-busting work.