Michael Goodyear is a J.D. Candidate at the University of Michigan Law School. 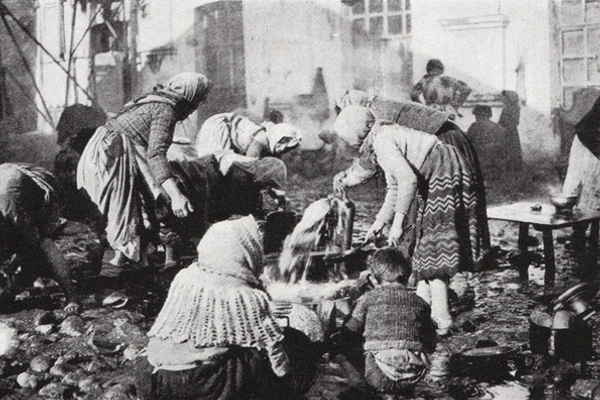 Currently over 65 million people worldwide are forcibly displaced from their homes and that number is on the rise. Wars in the Middle East, political unrest in Latin America, and violence in Africa are contributing to this modern refugee crisis. Against this disaster, the world is hardening its heart. American President Donald Trump capped the number of refugees to be resettled in the U.S. in 2019 at a record low. The European Union is increasing patrols to stop rafts of refugees from Africa and Turkey reaching European shores. In the search for answers to this depressing reality, one perspective is to look back at the 20th century’s first refugee crisis at the end of World War I and the Nansen Passports that became the solution.

At the End of the Great War

The idea of restrictions on freedom of movement extends back to ancient times. Even the Bible includes references to permission to travel internally and internationally. However, without firm borders or modern technology, it was difficult to actually enforce restrictions on the movement of peoples for any place larger than a walled city. It was only in the late 19th century that countries had the technological ability to impose and actually enforce strict immigration restrictions.

This ability and the realities of war came to a head following World War I. With millions of displaced persons in Europe and the Middle East, the newly formed League of Nations had to take action. It was particularly concerned about those who were now stateless following the reshuffling of borders and regimes following World War I. Chief among those, and the one that perhaps elicited the most sympathy as the former ally of the victors of World War I, were the White Russians.

Russians Without a State

The Russian Civil War fractured the Russian Empire. When Vladimir Lenin’s Bolshevik forces had all but triumphed by the end of 1921, over 800,000 anti-Bolshevik White Russians, whose constituents included both tsarists and republicans, had already fled the country. Lenin then revoked Russian citizenship from anyone who had fled Russia during the civil war. Nearly a million people, already destitute, were now left without even a state to their name.

Yet neighboring countries recoiled at the thought of taking in thousands of poor Russian refugees. After all, these countries were still recovering from the ravages of World War I and some had even fought against Russia during that war. On the other hand, if they sent the Russian expatriates back, they would likely be persecuted or executed by the Bolsheviks. Especially considering that the White Russians were former allies with Great Britain and France, it would be a permanent stain on the victors of World War I to not assist them.

The Solution of the Nansen Passports

Enter Fridtjof Nansen. Nansen was a Norwegian artic explorer turned diplomat turned human rights advocate who contributed to the founding of the League of Nations. The League now placed him in charge of assisting those displaced by conflict through the High Commission for Refugees. Nansen initially tried to repatriate the White Russians, but the obvious consequences of going back to a state controlled by their bitter enemies rendered this a nonstarter. He then tried to broker individual deals with countries to take groups of stateless persons, but the sheer amount of stateless persons required a more macroscopic effort.

To this end, Nansen proposed an international passport for stateless persons to the Council of the League of Nations in March 1922. The “Nansen Passport” did not grant citizenship, but it did give holders basic rights, including the ability to cross borders to find work and protection from deportation. Its basic purpose was facilitating onward movement. By 1923, 39 countries had recognized it, with more to follow in the next decade.

Meanwhile, many of the White Russians had retreated to the Black Sea coast under the protection of General Pyotr Wrangel, but with the Red Army approaching and all hope lost, they had to abandon their possessions in the ports and hurriedly set sail to save their lives. Wrangel’s large flotilla of refugees made for Istanbul, which, following the defeat of the Ottoman Empire in World War I, was an international zone under Allied occupation.

Allied protection established a safe space for this largest single group of Russian expatriates to begin to reestablish their lives. Istanbul played host to over 150,000 Russians, who established camps in the Beyoğlu neighborhood and acquired jobs as entertainers, restaurateurs, and laborers in the cosmopolitan city. In response, Nansen established a refugee office in Istanbul, which was ideally placed to assist Russian refugees with Nansen Passports, especially after the Bolshevik-friendly Turkish government of Kemal Atatürk took over the city. In the end, thousands of Nansen Passports were issued to Russians in Istanbul.

Expansion of the Nansen Passports

After assisting Russians in Istanbul, the Nansen Passport was further expanded into the Middle East. Although the original mandate of the High Commissioner was just to cover Russian refugees, it was later expanded to include Armenians, Assyrians, and Chaldeans. These groups had been subjected to genocide by the late Ottoman government. The Ottomans had killed hundreds of thousands, leaving shattered and orphaned communities in their wake. The disintegration of the Ottoman Empire and the acrimonious war between Atatürk and Greece had also displaced large numbers of people and left them without state protection. The Nansen Passport once again provided some protection to those who were left without a state.

In total, over 450,000 displaced persons received Nansen Passports, including writer Vladimir Nabokov and composer Igor Stravinsky. As contemporary journalist Dorothy Thompson put it, “the Nansen certificate is the greatest thing that has happened for the individual refugee . . . it returned his lost identity.”

The definition of a refugee was expanded beyond just stateless persons during and after World War II, becoming crystalized in the 1951 Convention Relating to the Status of Refugees and the 1967 Protocol Relating to the Status of Refugees. Instead of focusing on the group of stateless persons, the new refugee definition focuses on individual considerations about whether a person will face a well-founded fear of being persecuted if they return to their country. But while the refugee definition has advanced, the story of the Nansen Passports provides a valuable lesson for the refugee crisis in 2018. In fact, 1922 and 2018 share several parallels: both refugee crises were triggered by Western war efforts destabilizing other countries, a significant number of the refugees are in Turkey, and countries were initially reluctant to accept the refugees.

In 1922, Nansen created an innovative solution that garnered international support for stateless Russians and Armenians. Today, countries are still shutting their doors against refugees. Although the Nansen Passport itself is not necessarily a solution, the spirit of international cooperation and dedication to protecting displaced persons that it embodied most certainly is desired in 2018.