The Shocking Lynching of Will Brown 100 Years Ago

Palma Joy Strand is a professor of law at Creighton University in Omaha, Nebraska. 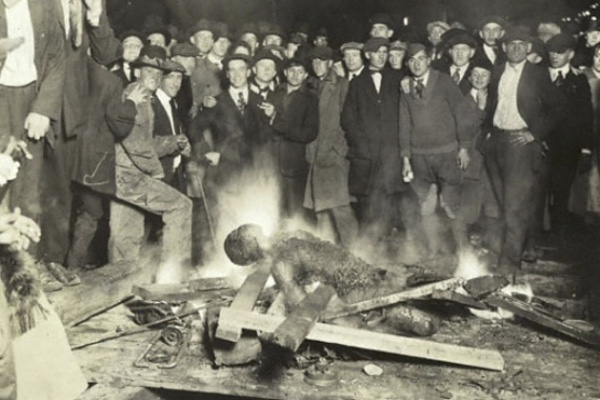 Until the killing of black men, black mothers' sons, becomes as important to the rest of the country as the killing of a white mother's sons, we who believe in freedom cannot rest. –Ella Baker

The first time I saw the photo of Will Brown’s lynched and burning body, I did not know who it was or where it had been taken. I was watching the documentary Fundi: The Story of Ella Baker about the life of the great Civil Rights organizer.  In the film, Ella Baker stands in front of a large framed and mounted photo as she speaks to the camera.  The elderly lady in sedate coat and pillbox hat stands in contrast to the raw violence captured in the photograph hanging on the wall behind her.  While she speaks, the unspeakable calls to the eye.

Some time later I happened upon the same photo in the context of images of Omaha and of the 1919 Omaha race riots in particular.  A shock of recognition.  That photograph was taken in Omaha.  That man was lynched in Omaha.  That crowd of white men looking on – that was an Omaha crowd.

We are coming up, next year, on the one-hundred-year anniversary of the lynching of William “Will” Brown in Omaha.  I have visited his grave in the Potter’s Field Cemetery in North Omaha.  The marker there was paid for many years after his death by a man in California who, I hear, learned the story from watching a documentary about Henry Fonda.  Fonda witnessed and was moved by the lynching as a young man.  The gravestone lies low to the ground, and its words are simple:

Graveyards and gravestones often tell stories.  Children who died young.  Wives and husbands who died close in time, the one following the other.  Men and women who served in the military.  Entire families near each other.

The story on Will Brown’s gravestone is a story for him and a story for us.  The words remind us first and foremost that he was a person, a human being.  He lived 40 years before the lynching that now defines him.  The story of his life is his alone.

The story for us is the story of his death.  LYNCHED IN OMAHA RIOT.  This story is our story as well as his story, and it comes with an admonition that is also an invitation.  LEST WE FORGET.

Sherrilyn Ifill is the President and Director Counsel of the NAACP Legal Defense Fund, the organization responsible for litigating Brown v. Board of Education and many other landmark civil rights cases.  When Ifill was a professor at the University of Maryland Law School in Baltimore, she wrote a book about two lynchings of black men that took place in the 1930’s on the Eastern Shore of Maryland – across the Chesapeake Bay.

Her book, On the Courthouse Lawn, is a hard book to read. Ifill first describes the lynchings in unsparing detail.  After reading these chapters my thoughts of Will Brown center on the terror he must have felt, the pain he must have endured.  I witness, through the photograph in my mind’s eye, the violence done to him before he died and to his body after he died.  A human being intentionally treated as not human.

It is a relief when Ifill turns her attention away from the actual lynchings.

Her next focus, however, is the white people in the community.  There is no doubt, of course, that white people did the lynching; blood is on their hands.  But white people also watched, encouraged, celebrated, took pictures and mementoes, picnicked.  Lynchings were often a festive occasion for whites.  And afterward, white people were silent.  The racial message had been sent.  Nothing more needed to be said, and few white people had the conviction or courage to speak up and challenge or to simply be a witness to the inhumanity.  Even the white people who stayed home were complicit.

For me, the admonition of LEST WE FORGET is a sharp reminder that today – as well as 100 years ago – it is all too easy for white people to look away.

The invitation of LEST WE FORGET is to pay attention to the racial violence – fast and slow – that surrounds us today.  To face up.  To witness.  To name.  To engage in the conversation.  To recognize the humanity of everyone in our community.  To take responsibility for doing whatever we can to stop the violence, dismantle the structures that cause it.

This invitation extends to all of us, to “we who believe in freedom.”