A History of Insubordinate Generals

John C. McManus is Associate Professor at the Missouri University of Science and Technology. Among his books are "The Americans at Normandy: The Summer of 1944--The American War from the Normandy Beaches to Falaise," (TOR-Forge, 2005), "Alamo in the Ardennes: The Untold Story of the American Soldiers Who Made the Defense of Bastogne Possible," (TOR-Forge, 2007), and "Grunts: Inside the American Infantry Combat Experience, World War II to Iraq," (Penguin, 2010), scheduled for release on August 3. His website is www.johncmcmanus.com 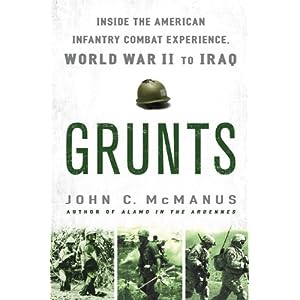 Stanley McChrystal is not alone.  Nor is he unique.  In fact, I would argue that he is only the latest in a long line of generals who have run afoul of their presidential bosses because of the inherent, and inevitable tension that exists between presidents and their commanders.  Inevitably, generals—who are, after all, military professionals—know more about war than presidents, yet they must obey all legal White House orders as they would any other in the military chain of command.  They must demonstrate complete public loyalty and harmony with their White House masters, a highly difficult thing to do.

The Constitution demands such civilian authority over the military and this is a principle that has, over time, unified Americans of all political persuasions.  If there is one thing that is abhorrent to Americans, from colonial times to the present, it is the idea of military rule.  In reading the now infamous Rolling Stone article that led to General McChrystal’s demise, what actually surprised me the most was his admission that he voted for President Barack Obama.  Almost all senior officers vote, of course, but they rarely announce their personal choices in public, even to express support for a president.  Soldiers are expected by Americans to be apolitical public servants whose first priority is to the nation as a whole rather than any particular leader or political party.  They take an oath to the Constitution, the highest authority in the land.

Presidents make policies and strategies.  Generals implement them.  All of this makes great sense in theory, but the hard part is figuring out how to make this work under the everyday stress of war or even just simple peacetime national security obligations.  This issue has vexed American leaders—civilian and military—throughout the history of the country and I believe that three examples illustrate the point.

In 1846, General Zachary Taylor led a small American force to multiple victories over the Mexican Army in southern Texas and northern Mexico.  His campaign culminated in the September capture of Monterrey, even though he was outnumbered and outgunned.  In the wake of this victory, his army was tired, undersupplied, and wracked with disease.  So Taylor agreed to an armistice with the Mexicans.  President James K. Polk, while pleased with Taylor’s victories, was enraged at the armistice because he felt that only the chief executive should make such a binding agreement with a foreign power.  Moreover, Polk was uneasy with Taylor’s growing status as a national war hero—and one who was quite cozy with the opposing Whig party.  The president worried that the general might emerge as a presidential candidate for the Whigs in 1848 (a valid concern as things turned out).  The brusque Taylor was never shy about voicing his negative opinion of the president and his Democratic administration.  Polk knew all about the general’s forked tongue and he was none too pleased with it.  Instead of firing the popular Taylor, President Polk marginalized him.  Polk and General Winfield Scott, the Army’s general-in-chief, conceived of an invasion at Veracruz with the goal of taking Mexico City.  Scott would command the expedition.  The president simply stripped Taylor of most of his troops, earmarking them for the invasion, thus consigning Taylor to second class status.  Ironically, this move so angered Taylor that he did leave the Army and successfully ran for president in 1848.  In a further irony, Polk declined even to run for reelection in 1848, sparing himself the humiliation of losing to the man he had effectively kicked to the curb.

A generation later, during the Civil War, General George McClellan, commander of the Union Army of the Potomac, famously clashed with his commander-in-chief, Abraham Lincoln, mainly over their differing opinions about war policy.  As a Republican, Lincoln believed the North’s war aims should include, not just preserving the Union, but the abolition of slavery.  To defeat the South, he advocated a war of attrition, in which the North would put maximum pressure on the South, along many fronts and simply overwhelm the rebels with Northern manpower and material advantages.  By contrast, McClellan was a proslavery Democrat who only wanted to persuade the Southerners back into the Union by winning a decisive battle or capturing Richmond.  He was also a supreme egotist with a Napoleonic complex who believed he was much better qualified to lead the nation than Lincoln.  This is the less appreciated side of his conflict with the president.  McClellan was never shy about disparaging the president in public, even going so far as to refer to him as “the original gorilla.”  Lincoln was willing to tolerate such disrespect if McClellan produced favorable results.  But, in the wake of several McClellan-led debacles throughout 1862, he finally decided he could take no more of the man.  He fired him in November of that year.  Indeed, one wonders if Obama would have looked the other way at the Rolling Stone article if McChrystal had been producing dramatic, measurable success in Afghanistan.

Sometimes, hostilities between an Oval Office occupant and a general have brewed up in peacetime, under the most innocuous of circumstances.  For instance, in May 1993, Major General Harold Campbell, an Air Force fighter pilot and Vietnam War hero stood up at a banquet and referred to President Bill Clinton as a “dope smoking, skirt chasing, draft dodging” commander-in-chief.  Within a month of this clear example of impertinent insubordination, General Merrill McPeak, the Air Force Chief of Staff, had fined Campbell and forced his retirement, all with Clinton’s obvious blessing.

So, what does all this tell us about McChrystal’s dramatic firing?  Quite simply, that it is easy for generals to clash with presidents and lose their jobs over issues large and small.  In the end what contributed to General McChrystal’s demise was not any sort of open policy disagreement with the president but instead a clear whiff of disrespect for Obama and members of his administration that permeated the Rolling Stone article.  In this information age, future commanders would be wise to keep their disdain for civilian leaders—and perhaps even their everyday disagreements with Washington—strictly private.

No longer possible. In the age of cell phone cameras, YouTube, FaceBook, Twitter and other wastes of bandwidth anything anyone who has had his name in the news says will be posted.

Free expression, therefore, is dead. Team Obama got dissed and they fired the most obvious, who obligingly offered to resign.