Cicely was Young, Black and Enslaved – Her Death During an Epidemic in 1714 Has Lessons that Resonate in Today's Pandemic

Nicole S. Maskiell is Assistant Professor of History and the Peter and Bonnie McCausland Fellow of History at the University of South Carolina. 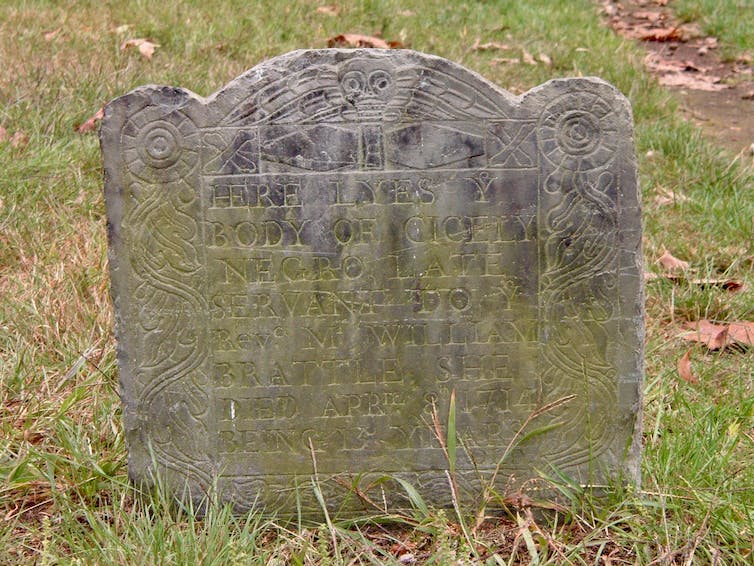 Over 1.4 million people have died from COVID-19 so far this year. How history memorializes them will reflect those we most value. CC BY-ND

What I believe to be the oldest surviving gravestone for a Black person in the Americas memorializes an enslaved teenager named Cicely.

Cicely’s body is interred across from Harvard’s Johnston Gate in Cambridge, Massachusetts. She died in 1714 during a measles epidemic brought to the college by a student after the summer recess of 1713. Another tombstone in the same burial ground remembers Jane, an enslaved woman who died in 1741 during an outbreak of diphtheria, or “throat distemper.” 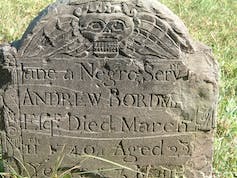 When diseases struck in the Colonial era, many city residents fled to the safety of the country. Poor and enslaved people, like Jane and Cicely – the essential frontline workers of the time – stayed behind.

Why were Cicely and Jane memorialized when so many other enslaved people were not? The archival record doesn’t provide a clear answer, but the question of who should be remembered with monuments and commemorations is timely.

Throughout the United States, as COVID-19 affects frontline workers and communities of color far more than other demographic groups, and protesters agitate for racial justice, American society is wrestling with its racial memory and judging which monuments and memorials deserve a place.

Against this backdrop, I believe it’s important to look back at how a few marginalized and oppressed people who served on the front lines of prior epidemics have been treated and remembered. After all, those whom society chooses to memorialize reflect what accomplishments – honorable or horrific – society values.

The lives, labor and sacrifices of women and girls of color have been overlooked for centuries. Of the 3.5 million books in Widener Library – the centerpiece of Harvard’s vast library system – I found that not one was devoted to Cicely or Jane, and few focus on women like them.

For early-American historians of Northern slavery like me, such fragmentary and untold stories are both intriguing and challenging. But this particular story was also personal, because when I first stumbled on Cicely’s tombstone, I was also a Black teen.

I was a sophomore studying history at Harvard when I came upon the headstone while wandering in the Colonial-era graveyard adjacent to campus. It had a carving of a death’s head on top and winding vines down the sides. It was both ordinary and extraordinary – it looked like other tombstones in the graveyard, but this one memorialized a young Black girl.

I wondered about Cicely. She most likely did domestic work in and around Harvard, as her enslaver was a Cambridge minister and a tutor at the college. But what else did she do during her short life, and why did her enslavers memorialize her with a tombstone? These questions and the mystery of her life inspired me to become a historian. Over the years, I have been passionate about piecing together fragments of her and Jane’s lives.

Jane’s enslaver kept a diary that provided some details about her life, but I found little written about Cicely beyond her adult baptismal record, dated just two months before her death.

Cicely lived and died during a time of racial unrest and disease. A slave revolt in 1712 in New York City led to several brutal executions and deportations. News of the revolt spread throughout the Colonies, stoking concerns of a wider uprising. Colonists armed themselves in fear.

Slavery existed in every Colony, including the North. At the time of the revolt, the Northern Colonies – from Nova Scotia down to Delaware – were home to around 9,000 enslaved people, representing a third of the enslaved population of the British mainland colonies. New York City had 5,841 residents, of which 975 were held as slaves. Boston had roughly 400 enslaved people.

Racial unrest was quickly followed by contagion. A measles outbreak the next year followed the same path up the coast as news of the revolt had traveled.

The epidemic started in Newport, Rhode Island, in the summer of 1713 and hit Cambridge, Massachusetts, that September. It broke out at Harvard before spreading to Boston. More than 400 Bostonians died – about 18% of them people of color – at a time when Black people were only 4% of the total population.

Racial discord and disease continued throughout the Colonial period. Between Cicely and Jane’s deaths in 1714 and 1741, a smallpox crisis gripped Boston, inflaming racial tensions. An enslaved person named Onesimus helped introduce an early form of inoculation called “variolation.” This technique was practiced on both white and Black Bostonians, to the consternation of many. On its heels, a five-year diphtheria outbreak ravaged New England, killing 5,000 people, including Jane.

Much like today, Colonists received mixed messages during disease outbreaks, with some leaders touting the value of inoculations while others stood fast against them. As Jane toiled in the shadow of Harvard in 1740, the male landowners of Cambridge held a contentious election that saw very high voter turnout amid a diphtheria epidemic.

[You’re smart and curious about the world. So are The Conversation’s authors and editors. You can read us daily by subscribing to our newsletter.]

History can show us how diseases disproportionately harm vulnerable and marginalized populations; how discord and strife lead to racial antipathy; and how epidemics are managed and mismanaged.

Cicely’s and Jane’s lives mattered outside of the value they provided to their enslavers. In a time of disease and racial unrest that echoes the experiences of generations past, the lives of oppressed people like Cicely and Jane are worthy of remembrance.