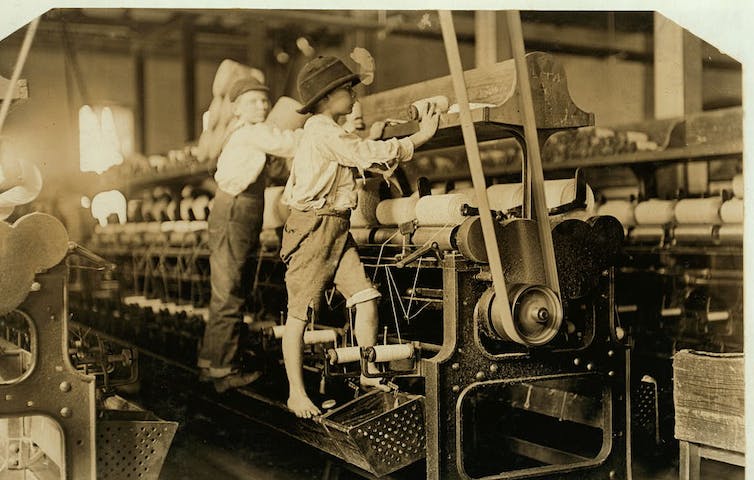 These boys working in a Georgia cotton mill were photographed in 1909. Lewis Hine/The National Child Labor Committee Collection via Library of Congress

Today, U.S. laws and regulations bar kids under the age of 14 from working in most industries. Children under 17 may not work more than three hours on school days, for example.

Ever wonder where these rules came from?

While studying this issue for more than a decade, I’ve learned that very few Americans thought there was anything wrong with child labor before the Civil War. Most kids under age 15 worked up to 14 hours a day, either alongside their parents or for an employer – unless they were rich. In that case, other children worked for their families.

Enslaved children typically began working alongside their mothers in the fields at a very young age. They also did housework, hauled water and took care of animals. Not only were these enslaved people unpaid “child laborers”; the law cast them as property subject to the threat of sale.

After emancipation, the question of whether to outlaw child labor was hotly contested for more than 80 years. Northern reformers who sought abolition squared off against their Southern opponents. 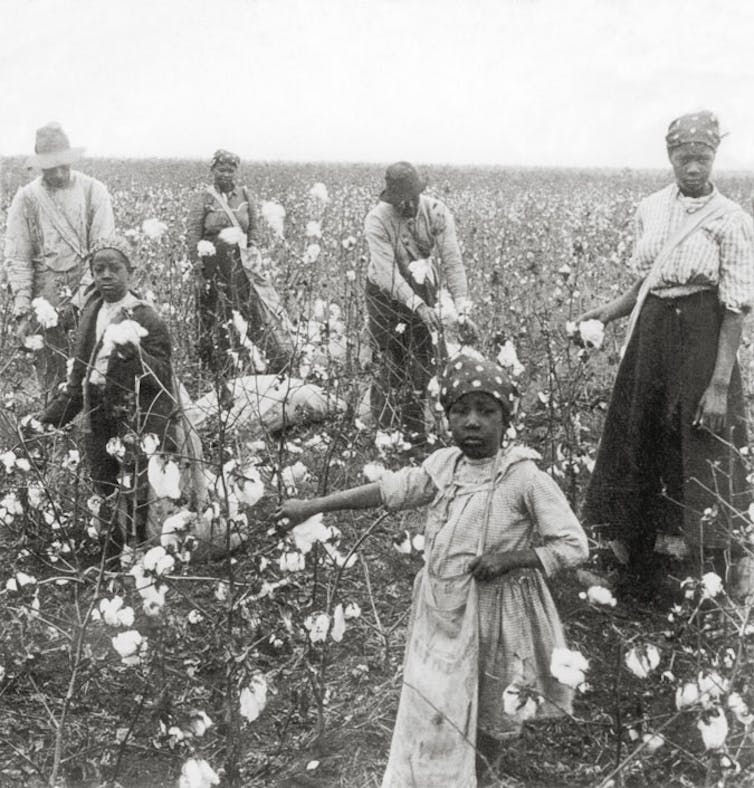 Even after emancipation, Black children would toil all day long in the fields. Briscoe Center for American History, University of Texas at Austin

As I explain in my new book on the topic, it took the Great Depression to reserve full-time employment for adults.

After the Civil War officially ended child slavery, most Americans still did not think there was anything wrong with children earning their keep, as long as working kids could get at least a rudimentary education. While some states such as Massachusetts had child labor laws on the books, those measures only regulated employment. Children could be limited to working as many as 10 hours daily.

By the 1870s, unions condemned child labor on the basis that overly young workers competed for jobs, making it harder for adults to obtain higher pay and better conditions – not due to concerns about the well-being of kids.

The government first gathered data on child labor, which was defined at the time as the gainful employment of children under the age of 15, in 1870. That year’s census counted 750,000 employed children – 1 in 8 American kids. It was a low estimate that excluded children working for their families.

The 1900 census found that more than 1 in 5 children worked. Reformers believed the real rate was even higher.

Some companies, meanwhile, were moving production to Southern states like North Carolina, South Carolina, Georgia and Alabama to take advantage of their lax regulations. Cotton milling quickly became one of the nation’s most child-labor-intensive industries, along with coal mining.

By 1900, a quarter of the South’s nearly 100,000 textile workers were under 16. Northern reformers were calling for change. They objected not because they considered child labor a form of child abuse but rather because these little workers were white.

The image of pale, shrunken-faced, debilitated poor white boys and girls in Southern textile mills was sensationalized in the North as “white child slavery.” Once the issue became a national obsession, activists formed the National Child Labor Committee in 1904 to “change the public conscience” on this issue. 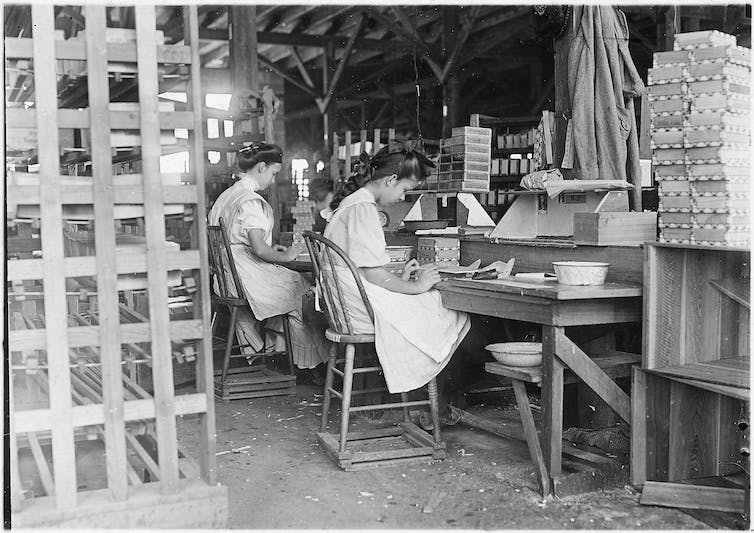 Despite Southern opposition, reformers argued that state-level regulations were rife with loopholes and difficult to enforce. In 23 states, for instance, there was no official way to determine children’s ages. Additionally, many states allowed poor children to work out of “necessity.”

The committee first pushed to outlaw child labor in 1906 on the grounds that it weakened the white race and, therefore, interfered with U.S. plans for global dominance.

Named after Sen. Albert Beveridge of Indiana, the Beveridge bill sought to use the commerce clause of the U.S. Constitution to ban the interstate shipment of products made by child labor. Southern opponents defeated it.

In 1913, the minister Owen Lovejoy brought new religious allies to the committee, which by then focused on the sinfulness of child labor in America.

In 1916, they got Congress to pass the the first federal child labor law. Like the Beveridge bill, the new law prohibited shipping products made with child labor across state lines.

However, a North Carolina mill worker, Roland Dagenhart, challenged the measure in court on the grounds that it violated his right to have his sons employed. The case wound up before the Supreme Court, which ruled in Dagenhart’s favor in 1918.

Reformers would try again, this time using the federal taxing power to tax the products of child labor, but the Supreme Court would strike down that law – also challenged in court by a Southern mill worker – as unconstitutional in 1922.

The showdown came in the 1920s. Fed up with the Supreme Court for repeatedly overturning child labor laws, Northern reformers tried to amend the U.S. Constitution. Prohibition had recently secured the 18th Amendment, and women had just gained suffrage through the 19th Amendment.

Many observers wrongly predicted that a child labor Amendment would become the 20th amendment.

U.S. culture was changing at the time. Americans were beginning to consider adolescence as a separate developmental stage between childhood and adulthood. Likewise, the education of children through high school was gradually becoming mandatory.

And yet those expectations didn’t materialize, due to a rural backlash.

Back then, most family farms relied on their own children’s labor. Many other children were hired as farmhands or “helpers” in seasonal agriculture. A 1922 study of seasonal demand for farm labor in Virginia, Maryland and New Jersey found that three-fifths of white children and nearly three-fourths of black children were working before the age of 10.

Southern industrialists seized the moment, warning thousands of farm families of a government takeover of their farms. A collective uprising against a child labor constitutional amendment became yet another culture war, this time between rural and urban communities.

Reformers panicked, buying radio spots and distributing pamphlets backing off the notion that they wanted to interfere with family farms. The movement to pass a child labor amendment fizzled by 1925. 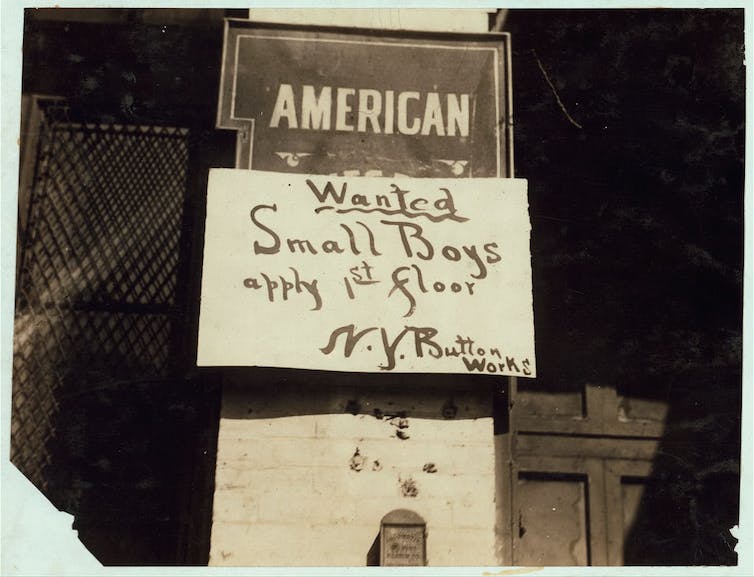 Factory employers would seek out children for jobs where little fingers would come in handy. Lewis Hine/National Child Labor Committee collection via Library of Congress

It took the Great Depression to resolve the debate over child labor.

Both Southerners and Northerners embraced an argument that union organizers had been making for decades and agreed that all available jobs in the nation should go to adult workers rather than children.

[Understand new developments in science, health and technology, each week. Subscribe to The Conversation’s science newsletter.]

Subsequently, President Franklin D. Roosevelt’s New Deal included the first federal child labor law not to be overturned by the Supreme Court. This 1938 law included provisions banning child labor under age 14 in most industries while exempting “children under 16 employed in agriculture” and “children working for their parents” in most occupations.

Today, FDR’s measure is still the basis of child labor laws in America. It was a major victory, to be sure. But its limitations reflect the mixed legacy of the movement to abolish child labor.