Paul C. Rosier is the Mary M. Birle Chair in American History at Villanova University.  He is writing a book on Native Americans’ experiences with citizenship. 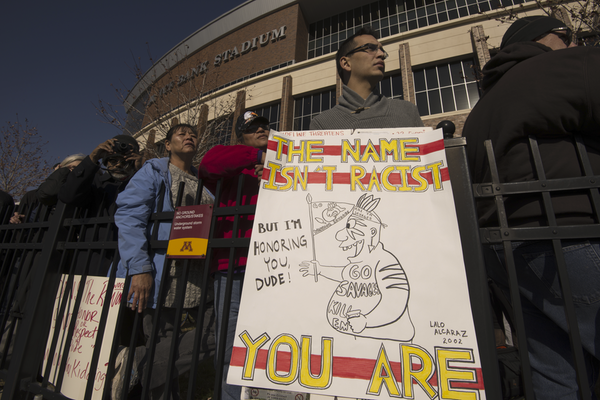 Growing up in Swarthmore (PA) during the mid-1970s I played on my high school football team, the Swarthmore Tomahawks.  The image of a tomahawk on our helmets was supposed to inspire fear in our opponents, I guess, though as a 150-lb. Quaker kid with a nickname of “stone hands” I doubt I did. We were one of thousands of schools and colleges to use Native American names and mascots in the 1970s; the list included “Indians,” “Warriors,” “Braves,” “Redmen,” “Fighting Sioux,” “Squaws,” and “Savages,” almost all of them denoting violence, almost all of them justified in the name of “honoring” Native people.  All these teams expropriated Native symbols for entertainment purposes that effectively covered up a violent history of settler colonialism; the use of Tomahawks was pretty bad, especially in Pennsylvania, where 20 Christian Indians were massacred by the so-called Paxton boys in 1763.

As a teenager I didn’t think about the issue of mascots, in part because I never learned about Native people in high school, with the likely exception of a section on Thanksgiving and a shout out to Pocahontas and Sitting Bull; Native Americans never made it to the 20th century in my high school books, which is the case today in many textbooks and classrooms.  I came to understand how problematic the use of tomahawks and other Native symbols and names was in American sports in writing a chapter on Native American mascots for a 2003 book called Native American Issues.  By then, many high schools and colleges and universities had dropped their Native names and mascots in response to protests by Native groups, but hundreds remained, including at the professional level.  In light of the Black Lives Matter movement and a national reckoning of systemic racism, some of these teams are rethinking their use of Native symbols.  It’s 2020.  It’s about time.

The Redskins name is being axed, finally, in favor of Red Tails or Red Wolves, largely because of pressure finally applied by the NFL and major team sponsors such as FedEx, Nike, and Pepsi-Co; although I applaud these companies for speaking out, let’s not forget that for years FedEx shipped Nike’s Redskins jerseys and shirts without batting an eye, enabling the team to sustain its use of a name offensive to Native people, who had campaigned against the name since the 1970s, and to any American who objects to racist stereotypes. The use of “Redskins” depoliticized Native people, dehumanized them into a stereotype, and debilitated them in terms of their own self-image according to numerous studies.  Washington, D.C. is the center of American political power, the place where diplomats from around the globe visit to conduct business and the place where federal legislation, court decisions, and presidential orders are generated.  What was the impact of the Redskins name, imagery, and associated fan performances, for decades, on politicians, judges, and other officials’ perception of Native people and their place in American society as they debated public policy and legal cases?

The Atlanta Braves baseball team in particular demonstrates the dishonest and damaging use of Indian imagery to cover up Native people’s traumatic history.  The team has announced that they will retain the name “Braves” but will review the use of the “tomahawk chop.”  In employing the tomahawk on uniforms and merchandise and allowing fans to perform their ritualistic “tomahawk chop,” the team, and Major League Baseball, perpetuate a lie about of one of the most sordid periods of American history: the forced march in the late 1830s of Cherokee from their homeland in Georgia along what they called The Trail Where They Cried to Indian Territory in present day Oklahoma, which led to roughly 4,000 Cherokee dying in federal stockades and on the trail.  It wasn’t the Cherokee who wielded tomahawks.  Rather, they tried to wield legal arguments tied to treaty rights to retain their sovereignty, arguments accepted by the U.S. Supreme Court in 1832 but ignored by President Andrew Jackson and a host of local and state officials eying the Cherokee’s gold resources and rich cotton-growing lands.

Changing the names, mascots, and symbols at all levels of sports is a starting point.  But decolonizing sports history requires a deeper analysis of how false historical narratives that ‘blamed the victim’ became embedded in public venues in everyday life that shaped generations of Americans’ perceptions of Native people, who have served their country’s armed forces for over a century in the hopes that it will honor the promises written in hundreds of treaties that represent the legal and moral legacy of American colonialism.

Editor's Note: As this article was prepared for publishing, it has been reported that owner Dan Snyder will name his team "The Washington Football Team" for the 2020 NFL season. Whether this is a retaliatory measure against sports merchandise companies who will be forced to try to sell a boring product after pressuring Snyder to change names is anyone's guess.