Please stop saying the past is in the past. It isn’t. 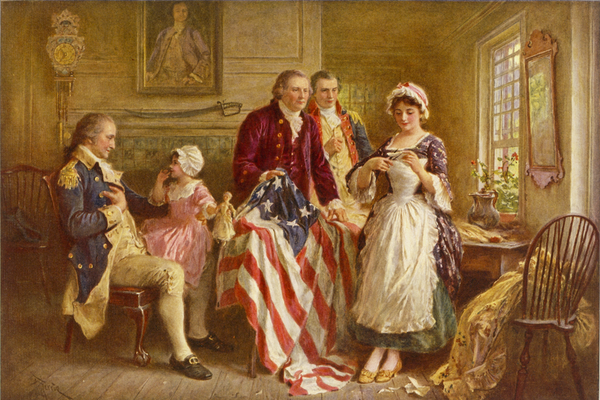 When controversy flared last month over a Revolutionary War-era American flag and Nike sneakers, a reporter asked me what might sound like simple questions:

Should the past stay in the past? Should we be making a fuss over historical realities?

“It’s the history of the United States,” another person told the reporter for the story. “Can’t change it. … What happened happened.”

Here’s the problem with that common sentiment: What happened in the past often has a profound impact -- on real people in real life. Right now.

If you missed it: Nike dropped its Air Max USA 1 shoe after former NFL quarterback Colin Kaepernick worried that the “Betsy Ross” flag design -- with 13 stars in a circle, on the shoe’s heel -- harkens back to an era of black slavery and has been used by white nationalist groups, according to published reports.

That version of the flag dates to the late 1700s. A century before, in 1676, both black and white workers rose up against the ruling body of the Jamestown colony led by Nathaniel Bacon, a white Virginian colonist. The uprising led the Governor’s Council to find ways to separate African workers from their white peers.

The event is often credited as the rationale for dividing, demeaning and diminishing the worth of black people in America -- division that we’re still grappling with. It happened.

Next let’s consider the Three-Fifths Compromise, a legislative agreement in 1787 that determined slaves would be considered three fifths of a free person. It happened.

Although the three-fifths designation was ostensibly for purposes of taxation and legislative representation, it helped set the stage for how black Americans are viewed and treated in this country. If you are three fifths of a person, you are much easier to abuse, ignore and oppress.

The three-fifths notion represents the genesis of the present debate on whether a citizenship question should appear on the national census. It explains why the census counts people, not citizens.

More recently, Plessy v. Ferguson, the landmark U.S. Supreme Court case of 1896, cemented the American concept of “separate but equal.” In practice, that has always meant separate and unequal. Homer Plessy, a person of color (one-eighth black), refused to move to a rail car designated for black people only. He was arrested and took his case to the Supreme Court, where he lost in a 7-to-1 decision. It happened.

The aftermath of the ruling led to the rise of Jim Crow laws across the South, affecting such everyday services and accommodations as schools, theaters and travel as well as voting rights. Even today, people are often segregated based on race all over America, and the voting rights of people of color are being challenged in several states.

After enslavement, lynching was a common means of racial intimidation and terrorism of men and women of color. There have been nearly 5,000 recorded lynchings since the late 19th century. But due to poor record-keeping and reporting, it’s likely there have been many, many more. It happened.

As late as 1998, a black man in Texas was lynched, dragged by the neck three miles behind a car driven by three white supremacists. That happened, too.

This “past” has never left. Reincarnations of nooses and their imagery are everywhere and still used to terrorize. Even in 2019, pictures of nooses were posted in a classroom in Roosevelt, Long Island.

When it comes to race in America, the past is not the past. Shakespeare got it right: The past is prologue. According to a Pew Research Center survey in June, eight in 10 black adults say ”the legacy of slavery still affects black people in the U.S. today.”

Last year, the center reported that “black households have only 10 cents in wealth for every dollar held by white households.” Likewise, the Economic Policy Institute reminds us that in this period of economic boom, black workers had the highest unemployment rate in the country, 6.3 percent -- nearly twice that of whites. And the Centers for Disease Control and Prevention tells us that black Americans “are more likely to die at early ages from all causes.”

I suggest that these indicators, and many more, are not the result of happenstance or coincidence today, but directly caused by things that happened in the past.

The flag credited to Betsy Ross, as an artifact of American history, is innocent. Unfortunately, Kaepernick was correct: This flag has been adopted as a proxy for the Confederate flag and is flown by white supremacist groups such as the Ku Klux Klan, the Patriot Movement, neo-Nazi groups and the militia gang Three Percenters, a group formed after the election of Barack Obama. The throwback flag represents an era when slavery was legal and commonplace.

So is the past really in the past? Or is it a profound part of our everyday lives? To me, the answer is indisputable.