James R. Stocker is the author of Spheres of Intervention: US Foreign Policy and the Collapse of Lebanon (1967-1976), Cornell University Press, 2016. 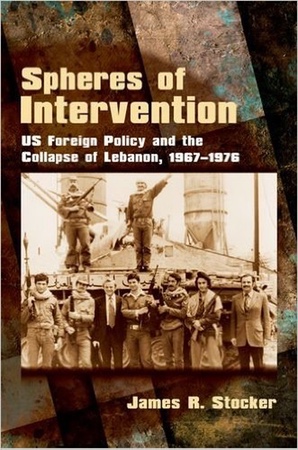 Historians have long been fascinated by the life and career of Henry Kissinger. Dozens of biographies have been written of the former National Security Advisor and Secretary of State, while thousands of books and journal articles have examined his policies towards specific regions, countries, and crises. It is thus almost surprising there is at least one more crisis that has gone unexamined, particularly in proportion to the amount of effort that Kissinger himself devoted to it: Lebanon.

In 1975, Lebanon entered into a decade and a half long civil war that ended up taking at least 200,000 lives. That number may sound small compared to the 450,000 that have so far died in Syria, or the more than one million that died during the Iraq-Iran War, but in a country of around 2.5 million people at the time, it constituted nearly 8 percent of the population, leaving practically no family unaffected. The war also led to a Syrian occupation that would last until 2006, as well as the creation of Hezbollah, which served as an Iranian proxy and continues to exist today.

Yet what has been greatly understudied is US policy toward Lebanon prior to the outbreak of war. The Eisenhower administration sent a force of more than 10,000 marines into Lebanon in 1958 when that country was experiencing an internal crisis, brokering a presidential transition from Camille Chamoun to army leader Fouad Chehab. In 1982, the Marines would be sent back to Lebanon, only to be withdrawn after a barracks bombing that killed 241 American service members. The US also intervened in a 1970 civil war in nearby Jordan, which was in a conflict with Palestinian militants on its territory. Did the Nixon and Ford administrations consider intervening in Lebanon around this time, when Lebanon was experiencing many of the same problems?

Central to this debate was the role of Henry Kissinger. Many works on Kissinger portray the National Security Advisor as aloof from Middle East policy during the early years of the Nixon administration, as the President gave this portfolio to Secretary of State Bill Rogers and the State Department. To a certain extent this is true, but Kissinger closely followed events in the region, particularly when it seemed that the stability of US allies was threatened, as was the case in Lebanon.

The US government considered the Lebanese government—at least, since 1964 under the presidency of Charles Helou—as a friend. But Lebanon, an Arab country with a political system that classified its citizens into religious communities, had been deeply divided since its independence in 1943. In the aftermath of the 1967 Arab-Israeli war, tensions were even higher. The defeat of the Arab states helped fuel the rise of the Palestinian fedayeen, militant groups that aimed to challenge Israel directly from neighboring states like Jordan, Syria, and Lebanon.

Israel chose to react to these groups through harsh “reprisal” attacks, even on countries with which it was not actively engaged in conflict. In December 1968, in retaliation for a Popular Front for the Liberation of Palestine (PFLP) attack on an airliner in Greece, Israel attacked the Beirut airport, blowing up dozens of planes. The Israeli government claimed Lebanon had provided safe haven to the PLFP, and hoped that the attack on the airport would force the Lebanese government to do something about the organization. Instead, the attack sparked a governmental crisis that would last months, and fueled public support for the fedayeen, who began to gather on Lebanese territory in increasing numbers. Although the Helou and the Lebanese security forces would try to resist these groups, including by confronting them militarily, they were unable to do so, and were forced to sign the November 1969 Cairo Agreement, which legitimized the presence of the militants on Lebanese territory.

Throughout this process, the State Department and National Security Council followed events in Lebanon closely, even if they remained for the most part publically silent about it. By the time of the Cairo Agreement, the US government had grown convinced that they had to do something about the situation. Overt military operations seemed feasible but undesirable, in no small part because they would completely discredit the existing Lebanese government. The US debated the possibility of convincing Israel to intervene on behalf of the Lebanese government, but this presented the same problem, in addition to another one: Washington was not convinced that the Israelis would leave the territory they occupied, just like after the 1967 War. Another option, however, was to funnel weapons to the Christian militias, whose right-wing orientation was aligned with Washington’s goals.

This latter option appealed to Kissinger and President Nixon, who authorized a contingency plan to send thousands of weapons to the Christian militias in case of need. In the end, at least at this time, the contingency plan does not seem to have been implemented. The planning for Lebanon during 1969 and 1970, however, proved useful for another country, Jordan, where the United States helped a leader that had previously been viewed as a hopeless case by Washington (King Hussein) to defeat the fedayeen with the help of an implicit threat by Israel to attack any country that sent troops into Jordan.

Jordan subsequently stabilized, but Lebanon’s internal situation remained rocky as Palestinian militant groups, looking for a new host state, moved from Jordan and Syria into Lebanese territory. After a confrontation in May 1973, the US began a conversation with the Lebanese government about the possibility of providing more support to the government of Suleiman Frangie. There is evidence that the United States even helped to facilitate weapons transfers to the Christian militias, both directly and via the army. But the outbreak of the October 1973 Arab-Israeli conflict put US support for Lebanon on hold as Kissinger decided that it was more important to try to produce a series of compromises between Israel and the belligerent states, rather than deal with Lebanon’s issues, including the fate of the Palestinians. When the civil war finally broke out, Kissinger tried to avoid dealing with it as long as he could, at least until it seemed to threaten the broader Middle East peace.

Kissinger’s involvement in Lebanon may not be well known, but the policies he helped create were extremely influential in the country’s path to war. He did not intend to cause this crisis. After all, US mediation between Lebanon and its neighbors, particularly Israel, was designed to stabilize the country, not destroy it. The same goes for US attempts to offer guarantees to the Lebanese government regarding actions it would take in the event of a breakdown in stability. However, it was ultimately Kissinger’s failure to address the legitimate grievances of the Palestinian refugees in his post-October War diplomacy that sealed the fate of Lebanon. Lebanon’s civil war, and its impact on the broader Middle East, must therefore be understood, at least in part, as the legacy of Henry Kissinger.

Read the introduction to Spheres of Intervention here