What Happens When You Mix Ignorance and Politics?

Ilya Somin is Professor of Law at George Mason University. He is the author of "Democracy and Political Ignorance: Why Smaller Government is Smarter" (Stanford University Press, 2013). 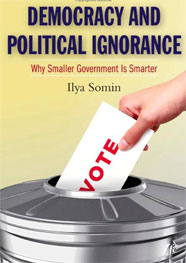 Effective democracy requires an informed electorate. Unfortunately, most of the public knows very little about government and politics. And they often do a poor job of evaluating the political information they do know.

Political ignorance is deep and widespread. A 2013 poll found that some 44% percent of the public do not realize that the Affordable Care Act, AKA Obamacare, is still the law. Most of the public does not understand the distribution of spending in the federal budget, despite ongoing political conflict over our fiscal problems. Voters greatly underestimate the percentage of federal spending that goes to massive entitlement programs such as Medicare and Social Security, while overstating by five or tenfold the percentage that goes to foreign aid (about 1 percent of the budget). The public is often also confused about which public officials have control over which issues. Most elections are decided primarily based on short-term economic conditions that political leaders have little control over. The fate of incumbents is also often influenced by other events they cannot control, such as victories by local sports teams.

Widespread public ignorance is not a new problem. Surveys show that political knowledge levels today are roughly the same as fifty to sixty years ago. Throughout American history, ignorance has often resulted in flawed and oppressive government policies. Relatively well-informed voters were much more likely to oppose racial segregation than ignorant ones. If not for voter ignorance, public opinion might have turned against segregation long before it actually did. Some nineteenth century evidence suggests that more highly educated and more politically informed whites were more likely to oppose slavery. If so, political ignorance might have contributed to the persistence of this form of oppression as well. Modern polling data shows that well-informed voters have long supported equality for gays and lesbians at higher rates than poorly informed ones. Absent widespread political ignorance, government persecution of homosexuals might have abated long before it actually did.

For decades, economists across the political spectrum have agreed that free trade is generally much better for the economy than protectionism. Well-informed voters tend to agree. But protectionism remains popular among the relatively ignorant majority, facilitating policies that harm consumers and slow economic growth for the benefit of well-organized business interests. There are many similar examples.

Political ignorance has actually gotten worse over time in one crucial respect: today’s government is significantly larger and more complex than decades ago. Government spending now accounts for nearly 40% of GDP, and government regulation controls more aspects of our lives than in the past. Today, the federal government restricts everything from the way toilets flush to the types of light bulbs we can use. Even if voters started paying more attention to political issues, they would still understand only a small fraction of the issues addressed by the modern state.

Widespread ignorance is not the result of stupidity or the unavailability of information. IQ scores have risen substantially over the last several decades, even as political knowledge has stagnated. And information is now more easily available than at any time in human history, thanks to the internet other new technologies.

For most people, political ignorance is actually rational. If your only reason to acquire political knowledge is to make better decisions at the ballot box, that turns out to be a very weak reason indeed. The chance that one vote will make a difference to an electoral outcome is infinitesimally small, about 1 in 60 million in a presidential election, and still very low in most other races. Even though few know the exact odds, most people have a rough intuitive sense that learning about political issues is unlikely to pay off.

A minority pay attention to politics for reasons other than voting. Just as sports fans follow sports because they enjoy cheering on their favorite team and hating its rivals, so “political fans” follow politics because they find it interesting and enjoy cheering on their favorite party or candidate while disparaging the opposition. Committed partisans usually know a lot more about politics than the average voter. Unfortunately, they usually evaluate political information in a highly biased way, overvaluing anything that supports their preexisting views and devaluing that which cuts against them. They also tend to follow politics only in media that reinforces their preexisting views, and discuss it only with fellow partisans of the same side.

The traditional strategy for overcoming political ignorance is to try to increase knowledge through education. But history shows that this cure is not especially effective. Enormous increases in educational attainment over the last sixty years have largely failed to increase political knowledge. Since the establishment of modern public education in the 19th century, governments have more often used it to indoctrinate children in their preferred ideologies than to increase political knowledge in any even-handed way. In many European countries, public education was initially established in large part to indoctrinate students in nationalism; in the United States, a major objective was indoctrinating Catholic immigrants in “American” values, which were often considered synonymous with Protestantism.

Perhaps things would change if the government adopted better school curricula. But political incumbents – many of whom owe their own election in part to political ignorance - have little incentive to do any such thing. Voters could potentially change those incentives by carefully monitoring the education system, rewarding elected officials who use the education system to increase political knowledge. But if voters were that well-informed, we might not have a political ignorance problem in the first place.

Even if government officials were to make a serious effort to use the schools to increase knowledge, it is unlikely that students would learn enough to understand the full range of issues covered by the modern state. Moreover, simply learning factual knowledge is not enough to overcome partisan and ideological bias in the evaluation of political information.

There is no easy solution to the problem of political ignorance. But we can alleviate it by limiting and decentralizing government power. When people “vote with their feet” in choosing which state or local government to live under, or what product to buy in the market, they have much stronger incentives to both acquire relevant information and evaluate it wisely than ballot box voters do. Most such “foot voters” spend more time acquiring and analyzing information when they buy a new car than when they decide who to support for president at the ballot box. That’s not because they think their car is more important or more complicated than the presidency, but because they realize that the decision on the car is likely to make a real difference, whereas their decision at the ballot box probably won’t.

Foot voters have often managed to acquire the information needed to make good decisions even under highly adverse conditions. Numerous poor and ill-educated Europeans and Asians chose to emigrate to the United States in the nineteenth century, correctly deducing that they would find greater freedom and opportunity there. In recent years, foot voters have flocked to such states as New Hampshire and Texas, where taxes are relatively low, job opportunities relatively abundant, and housing relatively cheap - in part because they have not imposed restrictive zoning laws that artificially increase its costs elsewhere. Although federal intervention against discriminatory state governments has sometimes greatly benefited minorities, it is also important to recognize that minorities have often benefited from the opportunity to “vote with their feet” for more tolerant jurisdictions, as many African-Americans did during the Jim Crow era, and gays and lesbians in more recent times.

If more decisions are transferred from Washington to state or local governments, or to the private sector, more issues can be decided by “foot voting” as opposed to ballot box voting, and more will be made in a well-informed way. Reducing the size and scope of government might also make it easier for voters to monitor elected officials. The public’s limited knowledge and attention would be more effective if it were not spread over so many issues.

Political ignorance is not the only factor that must be considered in deciding the appropriate size and structure of government. Sometimes, opposing considerations might outweigh the informational advantages of foot voting. But ignorance is still an important issue that is too often ignored. The next time we consider whether government power should be expanded to address some new issue, we should first ask whether that problem is likely to be handled well by an often ignorant electorate.