Juan Cole is the Richard P. Mitchell Professor of History and the director of the Center for South Asian Studies at the University of Michigan. His latest book, Engaging the Muslim World, is just out in a revised paperback edition from Palgrave Macmillan. 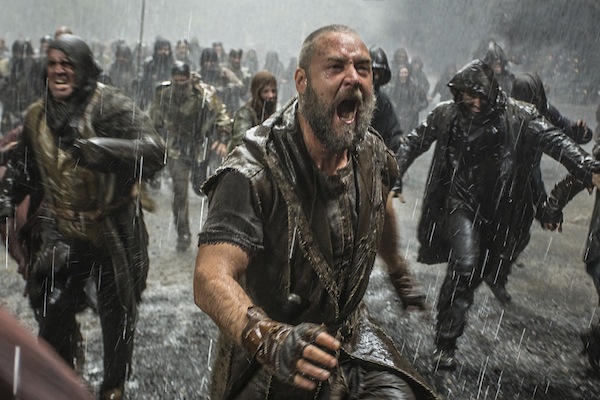 Darren Aronofksy's biblical epic “Noah” is already provoking controversy in the Muslim world, and has been preemptively banned in three Gulf states.

Biblical figures, such as Abraham, Noah, David, and Jesus, also feature in the Qur’an, which sees sacred history as the serial dispatch by God to humans of messengers who remind them of the divine teachings. Some conservative Muslim clerics draw a line at depicting holy figures such as patriarchs and prophets mentioned in the Qur’an in paintings, statues, or in film and television.

So Egypt’s al-Azhar seminary, the foremost legal and intellectual religious center in the Sunni Muslim world, called for a ban on the film “Noah” in Egypt.

But a secular organization in Cairo, “The Front for Creativity,” has lambasted the al-Azhar ruling, arguing that the seminary overstepped its authority in asking for a national ban.

The background here is that in fall of 2012, the then ruling Muslim Brotherhood in Egypt pushed through a constitution opposed by secularists, Coptic Christians, educated women and leftist youth. One of its objectionable articles, 219, gave the al-Azhar Seminary the authority to interpret those elements of Egyptian law which are rooted in Islamic law. Since arguably a lot of Egyptian law is so rooted, from the prohibition on murder to social welfare provisions, nationalist and secular Egyptians saw that article as a step toward an Iran-style theocracy. Ironically, hard line Salafis even tried to use the article against the Muslim Brotherhood president, Muhammad Morsi. When the latter was negotiating for a loan from the International Monetary Fund, the Salafis argued that loans on which interest is paid are a form of usury in Islamic law, and the IMF deal should be passed by al-Azhar for authorization by the president.

Interestingly, the al-Azhar seminary for the most part did not like article 219 of the Morsi constitution and did not want that sort of quasi-governmental role. Its leaders joined in the massive movement to overthrow Morsi in June, 2013. The new constitution, approved by national referendum in January, lacks this article 219 and is generally a much more secular document.

The Front for Creativity seems to me to be referring implicitly to this controversy in referring to the al-Azhar attempt to get Russell Crowe’s “Noah” banned. The group said that it is legitimate for al-Azhar to condemn the film or to warn that those who see it will be committing a sin, as long as in doing so al-Azhar is engaged in private Muslim “mission” (al-da`wah), not in an attempt to engage in rulership over the state (al-muhakamah).

The group makes three other objections. First, the prohibition on depicting prophets and holy figures is a matter of clerical interpretation on which there is not complete consensus, and for which no explicit Qur’an or other scriptural text exists. Moreover, we are past the days when such images can practically be banned, since the film will circulate on the internet in any case. (The second objection is the one discussed above, that al-Azhar doesn’t have the authority to ban a film for the nation).

Third, “we do not believe that in the 21st century any citizen in the street will see Russell Crowe as actually the person of Noah, in playing that role in the film, and any such citizen would belong in an insane asylum.”

Fourth and most important, they say, Noah is a figure of the Hebrew Bible or Torah, accepted by Islam but also by Christianity and Judaism. The latter two religions do not forbid depictions of prophets in artistic works. Will al-Azhar next demand a prohibition on Christian icons or Christian passion plays?

The subtext of the group’s statement seems to me to be that Egyptians generally believe that the Muslim Brotherhood, when they were in power last year, went way too far toward religious government and Muslim triumphalism that had a negative impact on Coptic Christians (ten percent of the Egyptian population of 83 million). The Front for Creativity is implicitly arguing that the al-Azhar statement on “Noah” recalls those excesses in unfortunate ways. It comes across as a blurring of the separation of religion and state, as an arbitrary clerical fiat, as a lack of faith in the modern citizen’s powers of discernment and individual responsibility, and as a potentially troubling Muslim-sectarian condemnation of a legitimate Christian practice.

Open talk about secularism and pushing back on decades of creeping theocracy in Egypt have been one outcome of the revolution against Morsi. The Front for Creativity is now using the public’s disgust with Brotherhood tactics to push back against al-Azhar’s attempt to intervene in what is shown in Egyptian cinema houses. The episode is a little window into the kinds of public debates newly authorized by the unfolding changes in Egyptian politics.

Even a decade ago, clerical attempts to get Mel Gibson’s “Passion of the Christ” banned in the Muslim world often failed. The anti-Brotherhood movement in today’s Arab world has two wings. It is being attacked from the right by Wahhabis and Salafis. But it is being attacked from the left by nationalists and secularists. In the latter wing of the movement, the chasing of the Brotherhood from the public scene (however invidiously) may be encouraging the growth of a public and frank secular discourse in Egypt, where that discourse has been rarer than in, say, Turkey or Tunisia.

So Russell Crowe may become a footnote to the Egyptian culture wars.