Joyman Lee is an historian of modern China. A sixth-year PhD student at Yale University, his dissertation is entitled "Where Imperialism Could Not Reach: Chinese Industrial Policy and Japan, 1900-40." He will be a visiting assistant professor of history at the University of Missouri, St. Louis beginning August 2013. 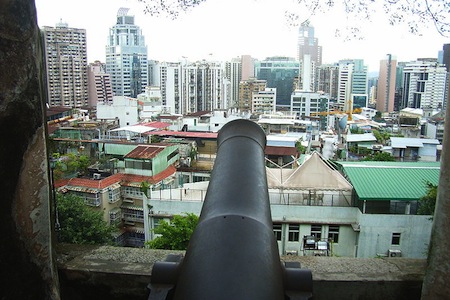 The view from Macau Fortaleza do Monte. Credit: Wiki Commons.

One of the most memorable dates I have ever had was on the walls of a seventeenth-century fort. Located on a small lush hill in the middle of a Chinese city, in the September rain you could see and smell the warm waters of the tropical ocean. The cannons evoke the first Iberian intrusions into Asia, when southern European sailors -- essentially pirates or middlemen plying the lucrative trade between much larger Asian countries -- were the first Europeans to set foot in the country. To the south the powerful Malay sultanate of Melaka, a tributary state of the Ming, was the first to fall. Further east the Portuguese attempt to proselytize Japan -- resisted violently by the archipelago's warrior rulers -- also left deep marks on that country’s history. In Macau, the latest addition to China’s territory, Asia's mostly forgotten encounter with Europe in the sixteenth and seventeenth centuries finds beautiful expression in the city's forts and baroque architecture.

Literally on the other side of the Earth, a string of forts line the crowded beaches on the coast of Salvador. In the sixteenth century the city was made capital of Portugal's American possessions, and with the fall of Melaka to the Dutch in 1641, Portugal's attention shifted decisively in favor of Brazil, where the Portuguese court eventually moved in refuge from Napoleon in 1808. Meanwhile Portugal's Asian possessions lived a quiet existence, until Indian and Indonesian troops stripped Portugal of Goa and Timor-Leste in 1961 and 1975, respectively, and in 1999 Macau was returned more amicably to China.

To most Chinese and Hong Kongers, Macau is no more than a giant casino as the special administrative region challenges Las Vegas as the world's most important gambling center. As an economic powerhouse, Macau, with a population of around 550,000 is no match for Hong Kong. Its GDP is merely a quarter of Hong Kong's neighbor Shenzhen.

Yet, it is in the realm of culture where Macau really excels. Like in Brazil, the Portuguese population in Macau was too small and Portuguese power too weak to dominate Portugal's colonial subjects, and so the rulers were mostly looking after their own interests. Portuguese men took as brides Goans, Malays as well as lower-class Chinese; the upper-class Chinese would not marry the foreigners. The Macanese as a mixed ethnic group was born out of this interaction, and when they started emigrating in large numbers before 1999 many expected the Portuguese language to go with them. The ethnic composition of the territory, where the Chinese account for some 95 percent of the population, made such an outcome seem likely.

To the surprise of many, this hasn't happened. Around 7 percent of Macau's population still have some command of Portuguese, and the number remains stable. Not only did the city gain UNESCO World Heritage Site status in 2004 on the back of its Sino-Portuguese heritage, China has also been actively using Macau to develop her relations with Lusophone countries.

This is not a textbook case in the history of the non-West. In many parts of Asia, nationalist governments saw the last vestiges of European imperialism as an obstacle to nation-state formation, and both India and Indonesia took over the Portuguese enclaves in the region by force.

China, however, has no similar desire to stamp down her power in Macau, at least no more than she did in 1557 when the Ming permitted the Portuguese to settle. For one thing, the Portuguese were never seriously threatening. The cultural distance between China and the West, and by extension China's lack of "soft power" globally, have led Beijing to see Portugal’s legacy in the territory as a business opportunity.

Based on this strategy, the Macau Forum has become a major arena for economic cooperation between China and Lusophone countries. In 2009, China became Brazil’s largest trading partner, and is making similar inroads in Brazil’s neighbors in South America. Culturally, the protection of Portuguese heritage has gone hand in hand with ambitious plans to develop the University of Macau into a world-class university. As Macau is already crowded, a new campus is being built on Hengqin island in Zhuhai, which will be fenced off from China and where Macau and not Chinese law will prevail.

In today’s Africa -- a major strategic objective in Chinese foreign policy -- France, the U.S., China -- not to mention Brazil and India -- are all contending for influence. Oil-rich Angola is already one of China's most important trading partners, and the same is true for Mozambique with new discoveries of natural gas. With a world-class university set in a Chinese territory where Portuguese is at least formally the official language, China can deepen her influence by educating aspiring Angolan and Mozambican lawyers in Portuguese, and specialists in other areas in English.

Closer to home, Macau’s neighbor Guangzhou already hosts the largest black community in Asia, and together with Macau and its sizable population of Africans from Portuguese-speaking countries, seem to underline the importance of south China not only as China’s gateway to Western capitalism, but also to her present encounters with Africa and Latin America.

Superficially there is little that the tropical beachside forts and baroque architecture of the Portuguese in Macau, Goa, Salvador and Maputo tell us about South-South cooperation in the twenty-first century. Yet, in the globalized world of today the greatest economic opportunities often come from networks where internal differences (complementarity) are the greatest. The Portuguese-speaking community, led by Brazil rather than a European power, is one of the more intimate at the same time that it is refreshing.

If China does indeed succeed in tapping into the Iberian cultural zone, it would surely help the country reduce her sense of cultural and political isolation in Northeast Asia, by enabling that country to translate some of her trade surplus into cultural capital, and in doing so to see the world globally on terms that it can help mold.