Ed Simon is the associate editor of The Marginalia Review of Books, a channel of The Los Angeles Review of Books. He holds a PhD in English from Lehigh University, and is a regular contributor at several different sites. He is also a contributing editor at the History News Network. He can be followed at his website, or on Twitter @WithEdSimon. 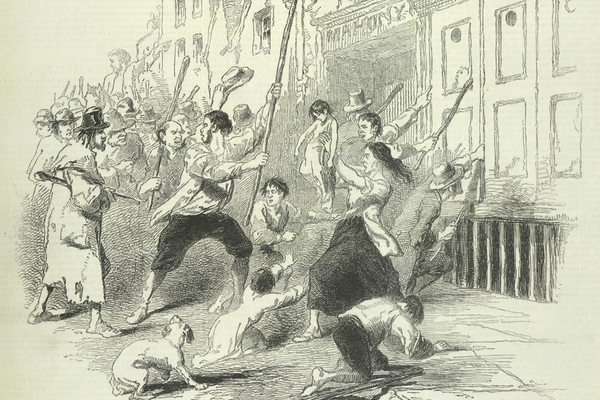 Chief Mato-tope of the Mandan tribe, known to white settlers by the name of Four Bears, died in the summer of 1837 in the upper valley formed by the Missouri River in what is today North Dakota, delivering in effect his own eulogy by telling his fellow tribesmen that the distinctive pox of the disease then killing him was to “die with my face rotten, that even the Wolves will shrink with horror at seeing me.” Mato-tope had first welcomed those who saw themselves as pioneers on the Western plain, later accurately blaming them for the smallpox epidemic that would leave only 27 members of his tribe alive. By the end of the 1837 Great Plains smallpox epidemic, 17,000 Native Americans along the Missouri River would be dead, and Mato-tope’s group of Mandans would be effectively obliterated.

Less than a decade later, but thousands of miles to the east, and another group of people faced destruction at the hands of a seemingly intractable natural phenomenon, but rather than disease which stalked them, it was famine. The Gorta Mór, or Great Hunger, better known as the Irish Potato Famine of 1845 to 1849, was caused by a blight which destroyed the crop. During the famine, one Galway parish recorded 240 congregants who died in only a few months of the dark year known as the Black ’47, with the Rev. Timothy Newell noting in the Dublin newspaper The Freemen’s Journal that “Several instances have occurred in this parish of almost all members of the families being carried off from the effects of the famine.” Another victim of the hunger was a woman named Bridget O’Donnell. Enshrined in an iconic drawing of the starving poor of Ireland which appeared in an 1849 issue of The Illustrated London News, she was quoted by a journalist, recounting how the “whole of my family got the fever, and one boy thirteen years old died with want.” It’s estimated that fully a million Irish women and men perished.

Less than a century later, and still thousands more miles to the east, and a different group of people would also die of hunger. They were victims of what the Ukrainians call the Holodomor—loosely translated as “to kill by starvation”—which saw rural areas of the country decimated in the dark years of 1932 to 1933. The Hungarian writer Arthur Koestler could describe how at the train stations there were often women “lifting up their infants to the compartment windows – infants pitiful and terrifying with limbs like sticks, puffed bellies, big cadaverous heads lolling on thin necks.” Public historian Anatoliy Peniok records the deaths that were listed at an orphanage, telling an interviewer for the Ukrainian news site Hromadske International that a researcher only need “Look at their names – Dneprostroy (Dneprobuil – ed.) Nina, Stantsionny (Station – ed.) Ivan, Pozdemelnyy (Underground – ed.) Zhora. They gave a surname depending on where the child was found. There were so many children [dying] in the house that the doctors lacked the imagination to invent something original.” Even if each one of those children lacked an original name, each one was a unique human being – as all of us are. And in the Holodomor each one of them was part of a larger class of people that perished, according to most historians around 3.5 million women and men – though possibly much higher.

Soviet dictator Joseph Stalin, the man who was responsible for those deaths by famine in Ukraine, supposedly said “If one man dies of hunger, that’s a tragedy. If millions die, then that’s statistics.” Yet Chief Mato-tope, O’Donnell, and the infants of Ukraine were not statistics, each was an individual human being, of varying experiences and beliefs, thoughts and faith, loss and love. To reduce them to one of 17,000, one of a million, one of three million, is to lose something intrinsic. In his own indomitable way, Stalin identified a dark truth about human psychology, our ability to glaze over at the enormity of numbers, to reduce the tolls of immense personal suffering of those whom we don’t know into mere marks on a ledger. His observation has implications beyond the manner in which attention can be diverted when the narrative is lost within the morass of gargantuan numbers, and to how those numbers can be used to naturalize those deaths, obfuscate their origins, and obscure the men responsible. Each one of the examples of mass casualties that I’ve given – the Great Plains smallpox epidemic, the Irish Potato Famine, and the Holodomor – was ostensibly caused by something “natural,” be it a virus, an agricultural blight, or poor crop yields. Yet each one of those examples was also unequivocally exacerbated by authorities with the intent of causing maximum death, and justified by pernicious ideologies that left those responsible with a clean conscience. As Rev. Newell said in his notice from The Freemen’s Journal, policy dictated by the colonial government administering Ireland from London meant that “evil is likely to be very much extended and aggravated,” which is true for all of these incidents.

Take that example of the Irish Potato Famine: a catastrophe that saw a million people die and more than a million others exiled – a population drop of almost 25%. Ostensibly the tragedy was the result of the blight, and thus could be attributed to “nature,” that impersonal force lacking in agency or conscience, and rhetorically configured as inevitable. But during the exact same time that the potato crop—the staple of poor Irish farmers—was failing, a massive amount of food was actually exported to England. A sympathetic English social reformer named Ebenezer Jones noted that in 1846 “there were exported from Ireland, 3,266,193 quarters of wheat, barley and oats, besides flour, beans, peas, and eye, 186,483 cattles, 6,363, calves, 259,257 sheep, 180,827 swine,” and so on. Jones notes that this alone would be enough to feed half of the Irish population, and yet 1846 saw thousands of deaths “owing to a land monopoly” by colonial landlords.

Reflecting back three decades after these events, the Irish nationalist John Mitchell called the calamity “an artificial famine,” that is an avoidable catastrophe that had been exploited by the British government for the express purpose of increasing death, while also rhetorically configuring those deaths as “natural.” To paraphrase Mitchell, God sent the blight, but the English created the famine. Furthermore, those deaths were justified by prevailing ideologies both in Westminster and among the British public, including anti-Irish and anti-Catholic animus, and the pseudo-scientific dictates of Malthusian demography. In a similar way, the fatalities of the Great Plains smallpox epidemic were justified by the United States’ white supremacist, anti-Indian policies (with disagreement among historians if the virus was intentionally spread or not) and those that perished in the Holodomor were justified as expendable according to the collectivist fantasies of the Soviet state. In these circumstances, no death is neutral – even if the cause is disease or hunger. Maybe especially if those are the causes.

Now that more than 80,000 Americans have perished from the novel coronavirus, and the Republican president of the United States is calling for the United States to be “open for business,” it’s imperative to ask how many of those deaths are his and his administration’s responsibility, how many of the coming deaths can be attributed to their policy, and perhaps most disturbingly of all, how many of these deaths aren’t just the result of incompetence but of willful agency? No conspiracy theories are needed here; just as English landlords didn’t release the blight into Irish fields, so too did the coronavirus arrive as just another malignant aspect of fallen creation. But just as those landlords took advantage of the resultant famine to pursue a policy which could be described as ethnic cleansing, so too has the Trump administration grabbed the reigns of COVID-19 to pursue their own ideological valorization of unfettered capitalism at the expense of the American populace.

Lest that be read as hyperbole, epidemiologist and director of Yale University’s Global Health Justice Partnership Greg Gonsalves asked on Twitter on May 6th “what does it mean to let thousands die by negligence, omission, [and] failure to act… What proportion of the deaths will be among African-Americans, Latinos, other people of color?” Gonsalves’ point is crucial, because it contextualizes COVID-19 deaths away from the impersonal purview of nature, and lays responsibility on those who organized a (purposefully?) erratic response. The president has consistently obscured or contradicted scientific advice from sober experts like Dr. Anthony Fauci, who has the unenviable position of trying to provide medical expertise within this jaundiced administration. Were the president’s response to coronavirus limited to suggesting that people chug bleach as a means of disinfection, it would be bad enough, but his coordination of relief efforts arguably shows even more malignant intent.

Aspects of the national response that have led to the United States leading the world in both COVID-19 infections and deaths include the (still) lack of adequate testing, the lack of personal protective equipment for frontline healthcare workers, and the lack of ventilators, while the administration forces hard-hit states to entirely coordinate their own relief efforts, while in some cases actually seizing medical supplies. Most of all there is the false dichotomy drawn between public health and the economy, with the astroturfed movement demanding individual states lift quarantine measures implanted to protect public health, a movement that will ultimately lead to thousands – if not millions – of additional deaths. As Gonsalves said, “This is getting awfully close to genocide by default.”

It’s a violent act of minimization every time the president or his supporters claim that these deaths are unavoidable or that additional deaths are required for the “good of the economy;” a continued assault on the untold who’ve perished and those who have yet to die. When Donald Trump and his defenders engage in the rhetoric of rationalization it elides both their own responsibility and that of the ideology that demands such blood sacrifices. This is a human tragedy in part caused by humans, and rhetoric allows those who are responsible to get away from it. Nature may have created the virus, but politics created the pandemic. The antidote to such a perspective is the opposite of being lost in numbers, it’s to remember that each death is the extinction of a singular, unique, blessed person, as Mato-tope was, as O’Donnell was, as the nameless dead Ukrainian children were.

Mourning has a radical import as both an activity and an emotion. Historian Dominick LaCapra argues in Writing History, Writing Trauma that mourning should be “understood not simply as isolated grieving or endless bereavement but as a social process that may be… effective in returning one to the demands and responsibilities of social life.” Mourning isn’t the end of mounting an effective defense of those endangered by coronavirus – but it’s a start. We must convert those ever rising numbers into people, even if we’re can’t know all of their names (even while plenty of us will know individual ones). Trump has yet to publicly express grief for those who’ve died, he has yet to meet with the families of those who’ve died, he has never read a list of names of those who’ve perished. So it’s our responsibility to remember them, to practice that radical empathy that both mourns the dead and holds accountable those who put them in the grave.