Stephan Kieninger is an Independent Historian and the author of The Diplomacy of Détente: Cooperative Security Policies from Helmut Schmidt to George Shultz (London: Routledge 2018) and Dynamic Détente: The United States and Europe, 1964-1975 (Rowman & Littlefield: Lanham 2016). 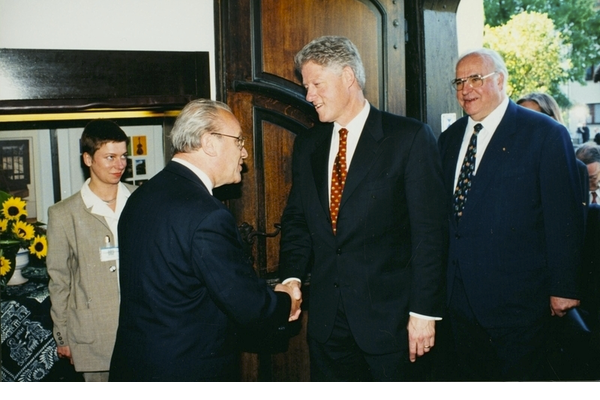 “I loved him,” said Bill Clinton in his eulogy during Helmut Kohl’s memorial in July 2017. “I loved this guy because his appetite went far beyond food, because he wanted to create a world in which no-one dominated, a world in which cooperation was better than conflict, in which diverse groups make better decisions than individual actors […]. The 21st century in Europe […] really began on his watch.”[1]

Indeed, Clinton’s and Kohl’s tenures connected the post-Cold War world with 21st century politics.[2]Both were united in their efforts to establish a new post-Cold War order and a lasting peace. They believed that there should be a strong European Union and an enlarged NATO so that Germany will be surround by NATO members in the East instead of being on the front line of Central European instability. Clinton and Kohl paid meticulous attention to Russia’s inclusion and the emergence of a special set of NATO-Russia partnerships.[3]They saw their endorsement of Russia’s President Boris Yeltsin as an essential investment in democracy and the establishment of market structures in Russia. Both thought that united Germany had to be part of NATO’s military out-of-area engagement in Bosnia, the first deployment of German forces outside of its own country since the end of World War II. The war in Bosnia proved that history and old conflicts had the potential to upset the emergence of a peaceful and prosperous Europe.

These issues were at the forefront of Clinton’s and Kohl’s meetings and telephone conversations. In December 2018, the Clinton Presidential Library released nearly 600 pages documenting their perception of international challenges and giving insights into the motives of their statecraft. Clinton and Kohl had trust in one another, and Clinton often called Kohl asking for advice on crucial topics.[4]

From today’s vantage point, the formation of Europe’s post-Cold war order looks easy. In fact, it was an enormous task and a constant challenge. In February 1995, for instance, Kohl told Clinton that “with respect to Russia, Central and Eastern Europe, NATO expansion, and the status of Ukraine, these are the essential points. No matter what we do with Moscow, if we fail in Ukraine (and the former Yugoslavia) we are lost. […] The situation in Europe is very vague and ambiguous.”[5]

During this critical phase, the Clinton-Kohl partnership provided leadership and vision. Since his days as a Rhodes scholar in Oxford in the late 1960s, Clinton had a keen interest in Europe and sympathy for Germany. During his first meeting with Kohl in March 1993, Clinton noted that “when he had been a student in England he had visited Germany as often as possible. At the time, he had been ‘almost conversational’ in German and still could understand a lot.”[6]

Kohl knew that Clinton expected united Germany to assume more international responsibility as a partner in NATO. In 1993, Kohl fought hard for the amendment of Germany’s constitution allowing for the country’s participation in NATO’s first intervention outside the member nations in Bosnia. “Today,” Kohl said at their March 1993 meeting, “good US-German relations are even more important than they had been thirty years ago when the division of Germany and the terrible fear of war had made things psychologically easier. People now have a different fear, and are asking whether their leaders can cope with new challenges or are drifting ‘like wood on the Potomac.’ This makes new German-American ties necessary.”[7]

Clinton and Kohl also spoke with one voice when it came to support for Russia’s President Boris Yeltsin. Both used personal diplomacies and positive feelings to interact effectively with Yeltsin despite frank disagreement such as the war in Chechenya, NATO enlargement and the Kosovo war. Both believed in their capacity to bring Yeltsin around on the NATO question doing all they could to allay Russia’s fears and its anxieties.[8]“In part,” as Clinton told Kohl in December 1994, “Yeltsin has a real concern. The Russians don't understand how everything will look 10-15 years from now.”[9]

Clinton’s and Kohl’s aim was to open up NATO, but slowly, cautiously and combined with an expanded effort to engage Russia. Indeed, they managed to keep NATO enlargement from harming Yeltsin’s reelection in 1996 while ensuring that NATO responded to Central and Eastern European desires to join the alliance. Both established a close personal rapport with Yeltsin and used countless meetings and telephone conversation to coordinate and synchronize their policies toward Russia. In September 1996, when Yeltsin announced his forthcoming open-heart surgery, Kohl called up Clinton providing a detailed report of his recent visit at Yeltsin’s dacha. “I think it is important that all of us be supportive of him during his surgery and that we do not create an impression of taking advantage of him during his convalescence,” Clinton said.[10]

In 1998, when Kohl’s tenure came to an end after 16 years as Chancellor, Clinton called him, praised his achievements and emphasized their enduring friendship: “Hillary and I think you are wonderful. I will always treasure our friendship and will be your friend forever. I am grateful to have worked with you and grateful that you always did the right thing […].”[11]Finally, in April 1999, Bill Clinton awarded Helmut Kohl the Presidential Medal of Freedom for his lifetime achievements and leadership. Their differences in age and style produced bondings rather than frictions. Both saw politics as a vehicle for major improvements in everyday life. Both sensed that Europe and the United States had to build the bridge to the 21st century – and they had to do it together. The Clinton-Kohl documents shed new light on their efforts to facilitate the emergence of an interdependent and transnational world based on freedom, peace, security and prosperity.