Barack Obama’s “Slave” Ancestor and the Politics of Genealogy

Honor Sachs is a Visiting Assistant Professor at the College of Charleston. 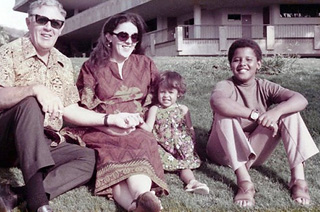 On July 30, the New York Times broke a story about the Obama family’s ties to slavery. Not Michelle Obama. Her family connection to slavery has been extensively covered by the Times and documented in Rachel Swarn’s American Tapestry. Rather, the story revealed the history of Barack Obama’s ties to slavery through his mother’s side. The article announced that genealogists have traced the family history of Obama’s mother, Stanley Ann Dunham, to seventeenth-century Virginia, where they claim it is possible she may have descended from an African servant named John Punch. Using ancestral databases and DNA evidence, researchers have linked Dunham’s history to the “mixed-race Bunch line,” a family who became wealthy colonial landholders and were racially considered white despite their ties to Africans like John Punch.

The story of John Punch occupies an important place in the history of slavery in North America. When the English imported Punch to the Virginia colony in the mid-seventeenth century, he became an indentured servant. The primary source of labor in the Virginia colony for the better part of the seventeenth century was servitude. The colony imported workers from Europe to work in tobacco fields. They had little interest in utilizing African slaves. African imports were comparatively expensive next to the cheap imports they could scoop off the streets or out of the jails of London. At the time John Punch arrived in the English colony, he was one of a relatively small population of Africans.

But something happened to John Punch in 1640 that signaled a transition in the way colonial officials thought about race and slavery. In 1640, Punch ran away from his Virginia employer with two white servants, one a Scot and the other a Dutchman. They escaped to Maryland where they were apprehended and returned home for punishment. All three runaways were whipped. The two white servants were punished with extended terms of service, but Punch received a far harsher sentence: he was made a servant “for the term of his natural life.” It was the closest thing to a slave the colony had yet known. Virginians would not fully embrace a system of slave labor for at least another four decades, but the willingness of colonial officials to distinguish a lifetime of servitude for Punch and not for his European counterparts suggests the beginnings of racial thinking that would ultimately equate slavery with people of African descent.

The evidence that Obama might actually be connected through his mother’s family to John Punch is admittedly shaky, but our modern fascination with the Obama family’s ties to slavery is very real. It reflects a popular understanding of race in America that can only understand blackness in connection to slavery. Barack Obama’s personal history has always been a puzzle, for it is, at once, quintessentially American and antithetical to what Americans want to believe about themselves. Some celebrate his family as reflective of the American dream while others deride him as an outsider and a foreigner. When faced with a complex personal history, slavery provides a familiar narrative to help us understand a complicated racial past. It distils generations upon generations of people and experiences into a simple explanation that any school-age child can understand. And, as such, it reveals how unwilling we are to probe the difficult questions about how the institution of slavery actually functioned and evolved.

For this reason, the historical figure of John Punch is particularly relevant. Punch has always been better understood through the lens of the present than from the circumstances of the past. In their book, “Myne Owne Ground,” Stephen Innes and T.H. Breen explain how historians have misunderstood Punch. This now classic book, read by countless college undergraduates, describes how scholars have used Punch to trace the roots of modern racism: clearly, he received a harsher punishment because he was black. What this overly simplistic interpretation misses is the fact that when the three servants escaped together, they privileged their common experience as low-class workers rather than their differences as Europeans and Africans. What we see in hindsight as clear evidence of racial discrimination clouds our ability to see the world in which John Punch actually lived. It renders it impossible for us to understand the historical experiences of those who did not yet see the world in black and white.

John Punch lived in a world before the English embraced slavery. He was never actually called a “slave,” for Virginians had not yet developed a legal language to explain such a category. But the current headlines in the media very clearly describe Obama’s ties to a “slave” ancestor. Centuries after his death, future generations make Punch into a slave in order to satisfy a deep cultural need to reduce racially complex family histories into a recognizable narrative. Slavery has become the end-game for understanding the Obama family story, the moment in time we fetishize in order to help anchor Barack and Michelle’s personal history to something familiar. In some ways, they have become trapped by the history of slavery just as much as John Punch.

The meanings of family history and genealogy have changed over time, but so far in this election season, they have proved particularly charged. Elizabeth Warren’s claim to have an Indian ancestor in her family tree came under intense scrutiny as her opposition scrambled to politicize what that might mean. A Romney aide evoked an “Anglo-Saxon heritage” to suggest a barely-coded racial sensibility rooted in ancient family pasts. This impulse to essentialize identity based on targeted genealogy has deep roots in the nineteenth century. It flourished during the early twentieth century with the advent of eugenics and the popular embrace of racial science. Through professional genealogical organizations, modern-day researchers link family histories to celebrated moments or individuals -- the American Revolution, the Boston Tea Party, the Mayflower, the Confederacy, Pocahontas, Jamestown -- in order to define what truly makes an American. Genealogy has always been political.

The impulse to ascribe political significance to family history is what makes slave genealogy particularly complicated. Since the seventeenth century, political leaders have manipulated slave family histories to serve their needs. In 1662, Virginians crafted laws that traced slave families through the mother rather than the father. While John Punch was possibly still serving out his life sentence, English lawmakers decided that slave families were essentially different. Over the course of the next two centuries, additional laws placed control of slave family ties in the hands of slaveholders. Slaves went to great lengths to protect and preserve their personal histories while slaveholders worked diligently to eliminate those connections. Stripping slave families of legitimacy was the key to buying and selling children without shame, to separating husbands and wives without guilt. The elimination and degradation of slave genealogy became a mechanism of racial control and the preservation of family history became a white privilege.

To tie Barack Obama to a slave past connects him with a history fraught with the politics of power. In many ways, it perpetuates the narrative violence over the enslaved and their family histories that has been an essential part of the institution since Africans first arrived on the continent. Why does Obama’s history end when it gets to John Punch? Why, out of nearly four hundred years of family connections, did this story make the headlines? The story ends there because we have decided that we know John Punch. We have ascribed to him an identity and decided what that means: he was a slave. He exists now in our minds as a composite of our historical imaginations, as a collection of meanings culled from a grab bag of insights into the history of slavery, in all its permutations. It is an identity that Punch himself would find utterly unrecognizable.