Lincoln and Colonization: Navigating the Evidence

Phillip Magness and Sebastian Page are the co-authors of Colonization after Emancipation: Lincoln and the Movement for Black Resettlement (University of Missouri Press, 2011). Magness is a Program Director at the Institute for Humane Studies at George Mason University, and an adjunct professor at American University. Page is a Junior Research Fellow at the Queen’s College, University of Oxford 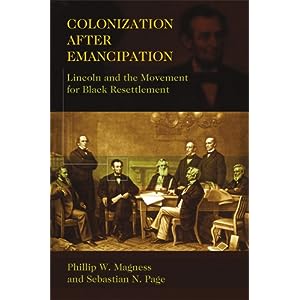 None of Abraham Lincoln’s policies have proven more enigmatic for historians than African American colonization.  He spoke up for it at length from the early 1850s right up to his Second Annual Message of December 1, 1862, whilst he had spent much of that summer and fall trying to make concrete arrangements for black resettlement in Chiriquí, nowadays part of Panama.

But “colonization” mysteriously vanished from his public lexicon thereafter, never to appear again.  Whilst the Preliminary Emancipation Proclamation of September 1862 had mentioned colonization, the final version omitted the policy without a word of explanation.

Scholars have been trying to account for this development for decades.  A minority has held that Lincoln probably still believed in colonization into the second half of the Civil War, but that he was frustrated by a lack of political support and the fiasco of the Île à Vache venture, an expedition of roughly 450 contrabands to an island off Haiti that quickly started to succumb to disease and neglect.

The large majority of historians have downplayed the importance of colonization in Lincoln’s post-Proclamation thinking, however, arguing their case in two ways.  First, that the president’s newfound silence hints at an earlier lack of sincerity, and suggests that he had only ever been trying to prepare a racist electorate for emancipation with his soothing talk of colonization.  Second, that he realized that asking African Americans to leave their native land was inconsistent with opening up black recruitment into the Union Army, since it wasted valuable manpower and was self-evidently unjust.  Just recently, Eric Foner has dated such a mental transformation to about spring 1863 in his award-winning The Fiery Trial.

Yet it now looks like the minority were right all along.

In fairness, the ostensible source record is horribly misleading.  It lends itself all too easily to conclusions drawn from a combination of the president’s sudden reticence on colonization in public, and what turns out to be highly incomplete archival holdings on the policy.

Any account of wartime colonization ultimately boils down to a set of Interior Department records at the U.S. National Archives.  Yet the integrity of the original collection of documents fell victim to a prolonged fight between Interior Secretary John P. Usher and James Mitchell, a Methodist minister who Lincoln tapped to work on colonization.  Much—perhaps even the majority—of the paperwork was lost.  (1)  Historians then drew the wrong inferences by taking absence of evidence as evidence of absence.

In fact, Lincoln spent the last part of 1862 and early 1863 gearing up for a “second wave” of colonization projects.  These initially overlapped with the better-known schemes of Chiriquí and Île à Vache, but went on to outlast them after the president had deemed those ventures unworkable and a failure respectively.

Stung by a lack of positive feedback from his Second Annual Message, Lincoln quietly developed an offer made in a diplomatic circular of September 30, 1862, and sought treaties with European powers for the resettlement of African Americans in their tropical American colonies, under official supervision and indenture.  This would guarantee better treatment and conditions than those offered by the shady speculators associated with Chiriquí and Île à Vache.

The most valuable documents in our account, Colonization after Emancipation, are to be found at the British National Archives in Kew, London.  The correspondence with the colonies in question, Belize and Guyana, is helpfully summarized down to mid-June 1863 in a hitherto unknown pamphlet intended only for official use, “Correspondence Respecting the Emigration of Free Negroes from the United States.”

Yet the critical documents of that summer are in the massive and imperfectly chronological files of the British legation.  The legation’s books were periodically shipped back to London en masse, and contain so much more information than the regular series of diplomatic dispatches to the Foreign Office, which may be more familiar to some researchers.

Here we found Mitchell helping Lincoln circumvent the secretary of war’s objections to recruiting emigrants from amongst the contrabands.  The president issued a canvassing pass to Belizean agent John Hodge in June 1863, and according to the latter’s report, told him that it was always his “honest desire” that it should go ahead.  The British minister, having previously noted Lincoln’s tendency to go it alone in matters like this, immediately demanded that Hodge also get permission from other cabinet members.  (Such behaviour from the president helps explain how these schemes managed to remain hidden for a century and a half.)  Here too was Lincoln and the secretary of state re-iterating the administration’s support for the scheme in August 1863, even as black soldiers had earned their spurs, likely because of the racist violence displayed in the New York Draft Riots.

Nevertheless, crediting everything to the miraculous content of British archives is something of a simplification.  There are still very real lacunae:  for example, we don’t know for sure why Her Majesty’s Government pulled its permission for the scheme in December 1863, though it was likely to do with diplomatic concerns about handling the Confederacy’s human property.  We didn’t find the Lincoln autographs we expected to be there—though we now know where they went—and we still don’t know the location of Mitchell’s missing papers.  (2)

The other side of the coin is that there were always clues, cryptic missives and tantalizing fragments in U.S. collections, most notably pertaining to James Mitchell’s dealings with African American emigrationists’ interest in these “imperial” schemes.  (3)  But scholars struggled to understand them in isolation, or to incorporate them into the overarching colonization narrative. Reconstructing the British negotiations was more akin, therefore, to attempting a jigsaw puzzle with pieces on both sides of the Atlantic.

Perhaps there has been some self-reinforcing logic at play, too, albeit of a collective, long-term and blameless nature: initial surveys of the sources did not turn up any new schemes after late 1862, thus producing the argument that colonization ended with the Emancipation Proclamation, in turn discouraging historians from really going down new research avenues. The most surprising ‘discovery’ of the project was the existence of corollary emigration negotiations with the Netherlands down to early 1864, which were actually covered over fifty years ago in a (presumably overlooked) biography of the U.S. minister to The Hague.

Ultimately, the prevailing literature on Lincoln and colonization puts the cart before the horse, explaining private policy in terms of public rhetoric (or its absence), and not vice-versa.  But freed from having to explain where colonization “disappeared” to after January 1863, historians may find themselves squaring Colonization after Emancipation with the known factual record more easily than you’d think.

The “imperial” projects hit a wall by early 1864, which—after all—was around the same time as Lincoln recalled the Île à Vache expedition, even if few have argued for the president’s active interest in colonization as late as that point.  And there was always a November 1864 letter in the Lincoln papers from Edward Bates, and an account in Benjamin Butler’s memoirs of a conversation just before the president’s assassination, pointing to Lincoln’s continued interest in colonization.  We have found further evidence backing up both, a logbook entry in the National Archives and a corroborating account of Butler’s meeting, respectively.

Historians had generally dismissed these fragments as inconsistent with what we knew, though the implications that this carried—of motiveless fabrication or spectacular misinterpretation on Bates and Butler’s part—hardly rang true, either.  Though nobody can recapture Lincoln’s precise thinking, the evidence points to a fear of the continued scope for racial violence, even after New Year 1863.  This may have had surprisingly little to do with putative commentary on black humanity, or with tentative moves towards the vote for African Americans.  In turn, this may be the key to understanding why can we speak more confidently of colonization after emancipation.

(1)  The official records are also rather sterile on the Chiriquí project, on which Page has written in an article currently under review for American Nineteenth Century History.

(3)  Magness drew the American evidence together three years ago in http://www.historycooperative.org/journals/jala/29.1/magness.html