History Left Behind in Education

Ronald W. Evans is a professor in the School of Teacher Education at San Diego State University. His most recent book is The Hope for American School Reform: The Cold War Pursuit of Inquiry Learning in Social Studies (Palgrave Macmillan, 2011) 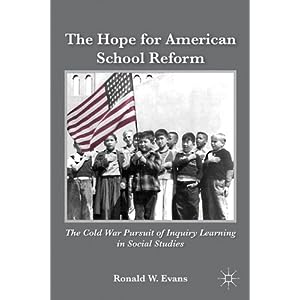 History in the nation’s schools is in trouble, plagued by a business-driven reform emphasizing coverage and test scores over quality, depth, and meaning.  What has resulted in many classrooms might best be described as a mad rush through the textbook.  In contrast, school reformers of the 1960s took a much different approach, emphasizing inquiry, discovery, and depth in pursuit of meaningful learning.  I believe it’s high time we re-examined that previous reform as a basis for comparison because it can tell us something about where we are now and how far we have fallen.

Like most school reforms, the “new” social studies, as it was called, had roots in the social context of its time—cold war competition and fears.  The reform had origins in criticisms of progressive education that had been brewing for decades, but which reached full force during the 1950s with critiques from leading intellectuals such as Arthur Bestor and red-baiting critics who revived and extended arguments that had been made against Harold Rugg, George Counts, John Dewey, and other leading educators.

The reform gained power from cold war manpower concerns, fears that the Soviets would overtake the United States in technological leadership.  This fear was confirmed by the launch of Sputnik in 1957, unleashing massive funds for school improvement.  Reformers relished the opportunity to promote faith in the redemptive power of reason and to imbue a significant segment of schoolchildren with the power of disciplined thought.

Following the Woods Hole conference (1959), psychologist Jerome Bruner argued that any child could learn the underlying and fundamental ideas of the disciplines at an age-appropriate level.  Through the motivating process of discovery, students would gain understanding of the fundamental structure of the disciplines and gradually transfer habits of critical thinking to other areas.  Physicist Jerrold Zacharias summed up his hopes for reform with the mantra, “Observation, Evidence, the Basis for Belief.”

Gradually, with the backing of science and government, a curriculum reform that started in science and math morphed into a broad movement aimed at revolutionizing social studies instruction in schools.  A meeting in 1962 brought conflicting views to a head in reaction to sociologist Robert Feldmesser’s claim that we would make no progress until we “slaughtered the sacred cow of history.”  The discussion that followed brought consensus around a shared realization that the problem wasn’t so much history vs. social science as it was the way the subjects were typically taught in schools, with emphasis on a textbook and a pattern of recitation.  A short time later, Project Social Studies was officially launched.

The projects and materials that emerged were pedagogically advanced, among the most intellectually stimulating and engaging social studies materials ever created.  They breathed new life into a field that had suffered from harsh criticism and stagnation and re-engaged many historians and social scientists in curriculum development and dialogue on school curricula after years of neglect and disinterest.

The current reform movement, focused on standards and testing, bears a few striking similarities to the curriculum reform movement of the 1960s, along with some profound differences:

In pedagogical terms, the 1960s reform was theory-driven, with inquiry and discovery learning fully embraced by reformers.  It sought to extend the church of reason from universities into schools.  The current reform is efficiency-oriented, with theories of educational improvement drawn from a business model rooted in Taylorism, with no comparable pedagogic theory at its core.  Unfortunately, in social studies at least, it is a reform in search of a theory and has led to the reification of teaching to the test.

In recent years, accountability reformers have hijacked the educational establishment, seeking to control it through state and federal law.  There is a profound arrogance among current reformers, a tragic disrespect for teachers and scholars built on the belief that laypersons outside the education establishment know what is best.  The current reform emphasizes history and geography with less attention to other social sciences and the persistent social issues and questions at the core of civic education.  It has led, sadly, to a narrowing of the curriculum, an increasing lack of flexibility, re-emphasis upon traditional methods of teaching, and a mad rush to coverage.

I believe the pedagogical theories, innovations, and materials of the 1960s are of continuing relevance.  Bruner’s theories might be seen as an extension and refinement of Dewey’s pedagogy.  In long-term perspective, both Dewey and Bruner, and the school reform movements they helped spawn, have largely been shelved, marginalized by the overarching influence of the managerial tradition of education for social efficiency, emphasis on what can easily be tested and measured, and a tendency to focus on certainties, not doubts.

The era of the new social studies offers a stark contrast with curricular trends of the present, a strong reminder of what is possible, and a compelling vision of inquiry learning.  The reform had a profound influence on a small but significant number of classrooms, teachers, and students.  A rethinking of current trends, along with sustained support and development, could lead to a time when inquiry teaching and learning will once again reach larger numbers of teachers and students.  My hope, and the hope of many educators, is that a serious and substantial questioning and re-framing of accountability reforms will occur.  The quality of our children’s learning is at stake.

I included two U.S. history textbooks in the "inquiry" style in the twelve books on which I based the first edition of LIES MY TEACHER TOLD ME. However, even by 1985, inquiry texts were on the way out. It's important to analyze why. I think there were three reasons.
First, they demanded too much from teachers. "Why did we have a Revolutionary War?" is a more interesting and more important question than "When?" but teachers can be surer of the answer to the second one. Back then -- and still, in some parts of the country -- many teachers of history/social studies were/are coaches, first. A whopping 15% never took a SINGLE course in history in college. They have neither knowledge nor interest in the subject.
Second, the inquiry textbooks were not serious enough. They were glib and did not demand serious research. Asking "Why do you think X happened" does not lead to research, serious history, or real thought.
Third, resources were not then available. How COULD a student OR a teacher research causes of the Amer. Rev. in, say, Circle, Montana?
Today, we can correct #1 and have corrected #3.