by Michelle A. Hamilton

Michelle A. Hamilton is the Director of the Public History program at The University of Western Ontario, London, Canada and the author of "Collections and Objections: Aboriginal Material Culture in Southern Ontario 1791-1914" (McGill, 2010). 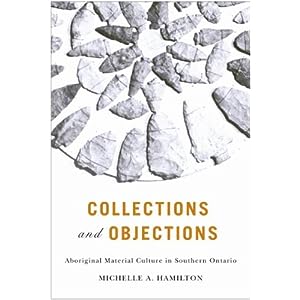 The end of 2010 marks the twentieth anniversary of the passing of the Native American Graves Protection and Repatriation Act (NAGPRA) which requires federally funded museums to inventory their collections, notify Native American communities of relevant artifact holdings, and to return human remains, sacred objects, and those of cultural patrimony.  Twenty years ago in Canada, the Assembly of First Nations and the Canadian Museums Association formed a joint task force to discuss concerns over the display and ownership of Native spiritual materials, human remains and objects of cultural significance.  The two organizations had been prompted to meet by the international boycott of the exhibit The Spirit Sings: Artistic Traditions of Canada’s First Peoples, prepared by Calgary’s Glenbow Museum in conjunction with the 1988 Olympics.  Although the protest began as a tactic to settle a Cree land claims dispute, the focus quickly turned to an examination of standard museum practices.  The joint task force report, Turning the Page, did not recommend national legislation, but a collaborative spirit to resolve these contentious issues.  Despite the different approaches to contemporary relationships between museums and indigenous peoples, the history of collecting ethnographic and archaeological items developed similarly in the United States and Canada.

Some stories from the history of anthropology, such that of an Inuit boy named Minik, are horrific.  In 1897, explorer Robert Peary brought seven-year-old Minik, his father Qisuk, and several other Inuit from Greenland to New York.  Franz Boas of the American Museum of Natural History had requested Peary bring him an Inuit in order to study their culture.  Several of the Inuit party, including Qisuk, shortly contracted tuberculosis and died.  To placate Minik who wished to see his father buried in the proper traditional Inuit way, the museum staged a fake burial, all the while planning on placing Qisuk’s body on display after cleaning his flesh from his bones.  In 1906, Minik learned the grisly truth from newspaper reports.

Anthropology was inextricably linked with colonial power struggles, and Native Americans were usually the disadvantaged, but it would be a mistake to see the development of the discipline in such black-and-white terms.  Native Americans participated in willing ways, although they often had different reasons than anthropologists for their involvement.  J.N.B. Hewitt, a Tuscarora from New York State, for example, at first worked with Erminnie A. Smith of the Bureau of American Ethnology but after her death in 1886, he continued on independently.  Over his fifty-one year career as an anthropologist, Hewitt studied various Native American languages, recorded oral traditions, and collected and preserved many ethnographic artifacts from communities in the United States and Canada.

Like Hewitt, other American anthropologists looked north for collecting grounds.  In 1897, George Dorsey, a curator of the Field Columbian Museum of Chicago, flagrantly ravaged burials on the northwest coast.  Dorsey was arrested, but when he promised restitution, the charges were dismissed.  Native protests provoked the Reverend John Keen, a missionary from the Queen Charlotte Islands, to write to Victoria’s Daily Colonist newspaper to condemn Dorsey’s actions.  “The Indians told me,” Keen wrote, “they found that almost every grave had been rifled, and the boxes which contained the bodies left strewn about.  In one case some hair, recognized as having belonged to an Indian doctor, and a box which had contained a body, were found floating in the sea.”  Boas revealed his opinion of such activities in a now famous quote:  graverobbing was “most unpleasant work,” he recorded in his diary, but “someone has to do it.”  Keen’s letter also brought the matter to the attention of the Canadian anthropological community, some of whom, like David Boyle, the archaeology curator of the Ontario Provincial Museum, defended Dorsey.

A year later, one A.J. McCordie was arrested for removing a skull from a grave on Vancouver Island. McCordie had decided to steal the skull for a present to a friend but later changed his mind and disposed of it in a canal, where a Native individual discovered it.  Prosecutors Langley and Martin condemned McCordie’s theft and recommended to all Indian Agents that the law should be strictly enforced.  Department of Indian Affairs Superintendent A.W. Vowell agreed, noting that Native people were very sensitive about the disturbance of their dead relatives.  Yet McCordie was leniently fined ten dollars—although the Canadian Criminal Code allowed a maximum of $100—and no jail sentence was recommended.

The language used by the lawyers and the DIA is revealing.  The lawyers disapproved of the indiscriminate collecting and treatment of human remains, “even those” that were Native.  Vowell condemned McCordie’s actions as showing “little consideration as though it had been the head of a dog or of a cat and not that of a human being albeit an Indian!”  Such comments suggest that grave disturbances of non-Native remains would have been considered much more seriously; the common nineteenth-century view that Native peoples were a lesser race, or of a lesser evolved stage of human evolution, justified this differential treatment of the dead.  As the scholars of graverobbing and dissection have shown, the bodies of minorities and marginalized people were buried as people and extracted as resources.

But like in the U.S., Natives in Canada participated in anthropology as well as protested against it.  For example, David Boyle of the Ontario Provincial Museum looked to his colleague John Ojijatekha Brant-Sero for an entré into the Six Nations of the Grand River community, south of Toronto where Boyle was based.  Like his more well-known fellow Mohawk E. Pauline Johnson, Brant-Sero was a performer who toured North America and Europe and both drew their material from their own knowledge and history.  Brant-Sero was also personally interested in preserving the history of his own people, and assisted Boyle with taking photographs, attending traditional ceremonies, and collecting ceremonial material culture during his fieldwork seasons in the late nineteenth and early twentieth centuries.

NAGPRA at 20, a recent conference organized by the National NAGPRA Program and the Museum Studies and Anthropology departments at George Washington University, aimed to assess the status of the legislation, its achievements and its future.  This conference should also prompt Canadians to ask similar questions about the effectiveness and future of its own non-legislative approach.  Has the creation of ethical guidelines by the Assembly of First Nations and the Canadian Museum Association joint task force rather than national legislation resulted in increased goodwill between the two communities?  Were its fears that legislation would polarize the issue proven true in the United States over high-profile contentious cases such as the ownership and study of Kennewick Man, one of the most complete ancient skeletons found in North America?  Was it wise to suggest repatriation should be dealt with on a case-by-case basis?  Or has this approach allowed Canadian museums to refuse to engage in repatriation?

Many metropolitan museums have indeed followed the guidelines put forth by the Turning the Page report.  The Royal Saskatchewan Museum is currently developing policies with the Treaty Four Native groups to create keeping houses that will store and exhibit ethnographic material according to their own cultural protocol.  Both the Royal British Columbia Museum and the Glenbow Museum have willingly returned ceremonial items to the Nisga’a and the Niitsitapii respectively, and the latter is working toward repatriation of objects to other nations.  The Glenbow, did, however, find it necessary to push for the passing of the First Nations Sacred Ceremonial Objects Repatriation Act in order to be able to return objects that were legally held in trust for the public.  Other institutions have reluctantly engaged in repatriation.  In 1998, the Canadian Museum of Civilization returned Iroquoian remains dug up in the 1910s from the Roebuck site, which were rebur­ied at the Akwesasne reserve.  Museum archaeologist David Morrison prefaced the return with a statement that questioned the right of one specific group to claim ownership:  “After a few thousand years,” he said, “everybody is the common property of everybody.”  Others see repatriation as a loss of scientific information.  For example, a current call by several Plains groups for the return of Papamihaw Asiniy, a meteorite, has met with resistance by the Provincial Museum of Alberta.  While the Native groups believe that the stone is an animate spiritual being that protects them, geol­ogy staff at the museum argue that it is one of the best scientific meteorite specimens in Canada.  While larger museums have addressed repatriation, smaller community museums experience a lack of funding and training in dealing with Native issues.  Many such collections are also badly documented because they were accessioned in the nineteenth century.  In all, Canadian museum curators and scholars await a much needed assessment of the effects of the Turning the Page report and its collaborative ethical guidelines.

Hamilton has written a thought provoking and interesting piece. My concern is one of the line(s) of demarcation between political correctness and science; where to draw that line and where to call out anti-scientism based on political correctness, superstition or myth for what it is. Of course it is understandable that one does not usually like one's parents, sibs, aunts and uncles dug up and measured, crated and stored in boxes in a museum, Jeremy Bentham aside. There is a connection between the present and the past of heritage, social relationships and indeed DNA that should not be ignored. Yet, the nonsense of the meanderings surrounding the Kennewick discovery and silliness of the situation is beyond the "line of rationality" and clearly enters superstition, myth and the political opportunism displayed by so many. It is easy for me to see a line drawn at the Pleistocene/Holocene, but only because I am not much interested in later dates, although I am sure others would prefer a 5,000 BP line. I do recall an isolated but very heavily mineralized human femur I discovered some 22 years ago,while teaching a field course. We only had a "fossil" collecting permit from BLM (our "approved stuff" was 74,000,000 years old) and the femur must have eroded out of a sand unit perhaps much more than 10,000 years old. A delay in our field work and an arduous drive to the regional BLM office, to "turn in" the femur and ask BLM to come and look at the site, before it rained again, resulted in BLM burying the femur at a "secret" location and never investigating the discovery. Utilitarian politics and a fear of doing the scientific thing won the day in the minds of the bureaucrats, and possibly a very significant discovery was lost.

I am no longer certain which special interests, creationist myth makers, or political correctness myth makers, are more damaging to science.