by Joseph A. Palermo

Mr. Palermo is Associate Professor of American History at CSU, Sacramento. He's the author of two books on Robert F. Kennedy: In His Own Right (2001) and RFK (2008). 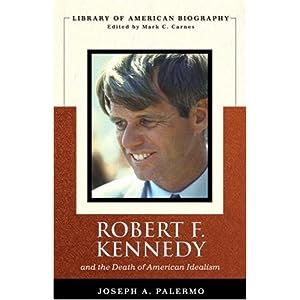 In his piece in Sunday’s New York Times, “Identity Politics Leans Right,” Sam Tanenhaus raises some thought provoking questions for historians.  He uses the current debate raging inside the Texas State Board of Education about what should be included or axed in the American history curriculum as a point of departure to discuss some of the ideological trends that influence the interpretation of American history.

The two books seem to have captured the spirit of the moment; both are on The New York Times best-seller list. Both are also, in effect, counternarratives. They seek not to revise but to displace more familiar histories . . . Both are conceived in a spirit of protest, and this explains their appeal at a time when protest seems the most dynamic force in politics.

One question raised in the piece is:  What does Tanenhaus mean by a "counternarrative"?  Does he mean a "narrative" that self-consciously chooses to include blacks, women, Native Americans, immigrants and other groups as "countering" something?  Ever since E. P. Thompson published The Making of the English Working Class in 1963, there's been a nearly half-century project of creating a new social and cultural interpretation of the history of the United States.  This shift to a new social history had more to do with the explosion of scholarship in the 1960s and 1970s than with the work of a single historian, even Howard Zinn.  It was the predictable outcome of the successful academic careers of people who previously had been woefully underrepresented in the history profession.  Tanenhaus's “more familiar histories” (whatever that means) have long ago been replaced by new interpretations by countless historians whose diversity inside academia is a relatively recent development.  I guess we can blame the GI Bill, the civil rights and women's movements for ruining the "familiar" narrative.

And when, exactly, was "protest" not "the most dynamic force in politics"?  Even in periods of relative tranquility there is ample evidence of "protest."  When historians were extolling the American "consensus" blacks were challenging the Jim Crow South, labor unions were striking, people of faith were marching against the nuclear arms race, and so on.  On the other side, John Birchers, segregationists, and other right-wing groups were protesting against the protesters and against the creeping "socialism" of their government.  One could jump into any period of U.S. history and find plenty of conflict, usually involving the powerful against the less powerful.

Tanenhaus raises another question when he contrasts A Patriot's History of the United States with the work of Howard Zinn pointing out that in A Patriot’s History Schweikart and Allen "describe the New Deal as a calamity that wreaked havoc on the American economy."  Now, this idea should stir the pot a little because Tanenhaus implies that the vast historiography of the New Deal, beginning with the work of William E. Leuchtenburg and continuing to the present, would line up somewhere equidistant between Zinn on one side and Schweikart and Allen on the other.  Yet the "consensus" (if one can use the word) of academic historians who have seriously studied the New Deal is far more consistent with Zinn's critical analysis of class relations and their discontents than with anything calling itself a "patriot's history."  And what on earth is “a patriot's history”?  Here Tanenhaus might as well include Amity Shlaes and Jonah Goldberg because their books, too, were on the New York Times best-seller list, and they too believe the New Deal was a "calamity."  These books, along with Schweikart and Allen's A Patriot's History, might be considered "counternarratives" to something, but they're not "countering" the historiography -- far from it.

Tanenhaus uses the Texas State Board of Education's conservative assault on historical standards in children's textbooks to make his wider points about how "identity politics" have also affected conservative thought.  Yet he doesn't mention the travesty of having dentists and housewives with no historical training whatsoever deciding on a whim who and what should be included in, or excluded from, the grand narrative of American history.  Board members recently voted to expunge Archbishop Oscar Romero from the historical record on the eve of the thirtieth anniversary of his assassination.  They see no value teaching children about the legacy of the Salvadoran archbishop despite the fact that their hero, Ronald Reagan, said that Central America was the "front line" against the spread of Soviet communism in the Western Hemisphere.  Tanenhaus might have mentioned this somewhat ironic decision by the Texas Board, especially if one values getting “both sides” in history.  Unfortunately, he drops the Texas debate altogether to quote Tocqueville and Hofstadter as it seems every journalist must do in every piece that engages any topic remotely connected to American history.

Tanenhaus praises Daniel Boorstin, William Manchester, C. Vann Woodward, and Arthur Schlesinger, Jr. as examples of those who chose a less ideological path in their interpretations of American history.  All of these giants in the field are well deserving of our admiration, but Tanenhaus’s point might be stronger if he acknowledged that even these historians did not work in a societal vacuum.  There proved to be simply too many contradictions in American history for Tanenhaus's “familiar” narratives to prevail indefinitely.

Painfully exposed in the 1960s and 1970s was the contradiction between a republic and an empire.  Cold War liberalism papered over this inconsistency and remained dominant until roughly the time when the Vietnam War and its attendant political divisions gave us the Cold War without the liberalism.  Hubert Humphrey, George McGovern, Jimmy Carter, Walter Mondale, and Michael Dukakis are among the political corpses that littered the ground where Cold War liberalism once stood.  The “consensus” to which Tanenhaus appears to want to return didn’t die because historians like Howard Zinn and E.P. Thompson ideologically upended historians like Hofstadter and Boorstin; nor did it die because of the incorporation of “identity politics” into the curriculum.  It unraveled because empirical historical forces in the real world demanded that it unravel.  Historians had no choice but to recognize the new order of things.

The good news from all of this is that any action the Texas Board of Education takes to purge the nation’s history of unpleasant contradictions and turn it into “a patriot’s history” is doomed to fail, because the children reading the textbooks and the teachers using them as a guide will not be doing so in a social vacuum.  There’ll still be Wall Street and foreign wars and racism and unemployment and a lot of other social phenomena all around them with undeniable historical pedigrees that will always have to be explained and interpreted.  The era of the uniform “familiar” narrative is long over and not even the "patriots" on the mighty Texas State Board of Education can turn the clock back.

To be fair, Gibbon wrote before the modern development of history as an academic discipline, and Joseph Needham was a biochemist who wrote about the history of Chinese science.

Still, I think you have a valid point. While I didn't detect any snootiness in Mr. Palermo's article, it *does* exist in the historical community.

There is a difference, though, between a person taking pride in their accomplishments/credentials and a person feeling superior to others for it. Sometimes the former can be mistaken for the latter.

I think I detected a familiar malaise in Mr Palermo's lament. He, like his more conservative colleagues in academia and the media, do not much like "non-professional" (i.e., non-academic) talking history. He does not want the untenured loose in the field. One can properly be aghast at the Texas neanderthals and their malevolent mis-reading of America's past. But, surely we need to remind ourselves that their occupations have little or nothing to do with it. In fact, most of the really memorable history of the past 200 years, from Gibbon to Joseph Needham, has been produced by non-professionals, that is; by people who did not make their living as professors of history. Mr Palermo might bear this in mind the next time he feels snooty about the uncredentialed.