The Wearing of the Green

Christopher Shannon is Associate Professor of History at Christendom College in Front Royal, VA. His most recent book is Bowery to Broadway: The American Irish in Classic Hollywood Cinema (Scranton, 2009). 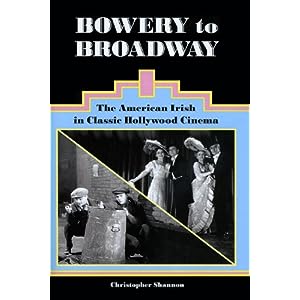 Well, it’s that time of year again.  As St. Patrick’s Day approaches, many Irish Americans prepare to celebrate their ethnic heritage, while many other Americans prepare to steer clear of the streets of major U.S. cities for fear of the celebrations that will ensue.  I see some cause for hope in the fear.  In our late date of the year 2010, at a time when most Irish Americans have moved out of the cities and assimilated into the white-bread safety of American suburbia, the 24/7/365 capitalist work time of the cities the Irish once ruled still comes to a halt for at least one day as Americans of all ethnic backgrounds throw themselves into an orgy of drinking, fighting, singing and dancing that flies in the face of the fresh-scrubbed wholesomeness of official, national American holidays such as the Fourth of July and Thanksgiving.  Scholars of Irish American history who bemoan the reduction of Irish culture to the worst of nineteenth-century, stage-Irish stereotypes might do better to sit back and wonder at the simple, and almost miraculous fact of the continued existence of the St. Patrick’s Day parade—a private, ethnic religious holiday whose public celebration dwarves those of most official national state holidays.

The sad fact is that very few academic historians have bothered to wonder at, much less study, this phenomenon.  The study of parades has, of course, become a fairly significant sub-field in U.S. cultural history, thanks largely to works such as Susan Davis’ Parades and Power.  Daryl Adair and Michael Cronin’s Wearing of theGreen stands as an introductory survey of the St. Patrick’s parade in the context of global Irish emigration, but no major history of the parade in America exists to rival the work of scholars on other, now defunct traditions of celebration.  This is a scholarly gap is all the more troubling given the emphasis on ethnicity in our age of multiculturalism.  In the field of ethnic studies, it would appear as if “No Irish Need Apply.”  If the Irish appear at all in contemporary studies of ethnicity, it is more often than not as racists, the fully assimilated “white” people who serve as the demons in so much of the literature of “whiteness.”

Noel Ignatiev’s How the Irish Became White has the Irish achieving whiteness sometime in the middle of the nineteenth century.  This would have come to a surprise to Al Smith, the first (and for my money, the only) Irish Catholic candidate for president of the United States, who in 1928 had to endure nativist slurs the likes of which had not been heard since the heyday of the Know-Nothings in the middle of the nineteenth century.  In many ways, the Irish racist has a place in the contemporary academic imagination analogous to that of the ape-like Paddy in the minds of nervous, middle-class WASPs in the nineteenth century. In making this criticism, I do not mean to deny the lamentable and deplorable reality of Irish American racism; still, we cannot equate racism with “whiteness” or assimilation.  In fact, I believe the low standing of the Irish in mainstream studies of race and ethnicity reflects a historic reality deeper than racism:  namely, the historic reality of the failure of the Irish to conform to scholarly expectations of what counts as ethnicity.

I came to this realization in the process of writing my most recent book, Bowery to Broadway:  The American Irish in Classic Hollywood Cinema.  As I began my study, I quickly realized that the Irish were the most represented ethnic group in American film, yet the least represented in film scholarship.  That Irish American films have not registered in the minds of scholars as ethnic reflects a particular definition of ethnicity as liminality, a condition of being caught between two cultural worlds and forced to forge a new identity out of the clash of these two worlds.  Werner Sollars has given us the classic formulation of this type of ethnicity in his Beyond Ethnicity.  To be fair, we find such a story of ethnicity in the film that launched the sound era, The Jazz Singer (1927), which tells the story of a young Jewish entertainer’s struggle to reconcile his love for American popular music with his duty to follow in his father’s footsteps as an orthodox Jewish cantor.  The major Irish American films of the 1930s and 1940s—Angels with Dirty Faces (1938), Kitty Foyle (1940), Gentleman Jim (1942), Yankee Doodle Dandy (1942) and Going My Way (1944)—develop a very different story in which Irish American characters struggle with conflicting loyalties within their local, ethnic communities.  The happy endings of these films come not with the imagining of a utopian synthesis of ethnic and American, but when the individual reconciles himself to the community by coming to terms with the standards of the community.

The priority of the community to the individual appears most powerfully in these films’ repeated rejection of upward mobility—a rejection of the American dream of self-creation, a dream that has been one of the most potent cultural forces in the destruction of distinct ethnic cultures in America.  Often dismissed as fatalism, this attitude reflects a hard-won, working-class realization that nobody really makes it on his own, that we stand or fall together.  Or, as the gangster Paddy Ryan says to his protégé Tom Powers in The Public Enemy, “You gotta have friends.”

Irish stories that expressed doubts about the American dream clearly struck a chord with Americans who saw that dream collapsing all around them during the Great Depression.  The return of prosperity in the years after World War II renewed faith in the American dream.  The Irish were all too willing to follow their fellow Americans in embracing that dream with renewed vigor.  There are, of course, pockets of persistence (as opposed to resistance) in some of the old Rust Belt cities, but they are hardly representative of Irish American life as a whole.

As I prepare to due my part to keep up certain ethnic traditions, I bemoan not the excesses of the day, but the sobriety of the rest of the year.  This sobriety manifests itself most perniciously not in repressive self-control, but in the calm and common-sense assumption that the individual pursuit of happiness is the birth right of every American, regardless of the collateral damage it may inflict on communal solidarity.  The Irish once knew better.