Immigrant Loyalties During the Great War and Today

David Laskin is the author of The Children’s Blizzard (Harper Perennial, 2004). His new book The Long Way Home: An American Journey from Ellis Island to the Great War (www.thelongwayhomebook.com) will be published by Harper this March. 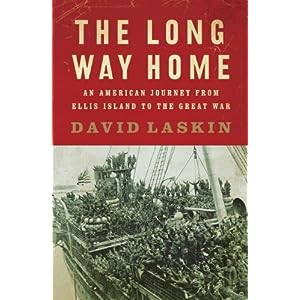 Italians, Poles and Jews, the three largest groups of newcomers during the peak years of immigration at the turn of the last century, arrived in the United States with deep cultural traditions, fervent religious beliefs, great expectations, and a hunger to succeed.  One thing these groups did not bring with them from Europe was a strongly developed sense of national allegiance to their countries of origin.  Italy, unified only in 1861, remained a loose confederation of fiercely independent regions in which individuals identified with family and church rather than the nation state.  Poles, whose homeland was still divided between three empires, channeled their national loyalty into the Catholic Church.  Jews, who had had no nation of their own for two thousand years, endured limited civil rights in most of the countries of Western Europe, and violent oppression in the Russian Pale of Settlement.

And yet, soon after emigrating, all three groups enthusiastically and spontaneously pledged their allegiance to the United States.  Why?  Why would an Italian peasant from Puglia who shunned the central government in Rome proudly tell his kids about the first time he voted for an American president?  Why would a Jew who smuggled himself out of the Pale in a hay-cart in order to avoid military service under the Russian tsar enlist in the United States Army?  Why the profusion of American flags hung outside Polish-American homes on U.S. national holidays?

The answers have shades of difference for each group, but the common factor is opportunity:  not only the obvious peacetime opportunities of paying jobs, social fluidity and basic human rights, but also the wartime opportunities provided by military service.  In fact, in many immigrant families, a son’s service with the U.S. military in World War I, though fraught with doubt and anxiety, became a prime factor in engendering loyalty to their adopted country.

For Italian-Americans, this surge of American patriotism was rooted in the profound social changes concomitant to immigration.  The typical Italian of the late nineteenth and early twentieth centuries was an agricultural worker or small land-holder from the mezzogiorno (the impoverished southern third of the peninsula) who spoke a highly localized dialect and adhered to a centuries-old tradition of campanilismo – loyalty that extended as far as the sound of the bell in the village church tower (campanile).  Most of these peasants were quick to eschew agricultural work after they emigrated, choosing instead to labor in and around America’s large, rapidly industrializing cities.  Family and church remained strong anchors in the close-knit Italian communities of the New World; but the breaking of the ancient bonds to one plot of land and one campanile freed Italian-Americans for national engagement.

Paradoxically, immigrants from Italy became Italian before they became American.  In Brooklyn and Buffalo, Italian immigrants learned to speak the Tuscan dialect that is standard in Italy rather than just the dialect of their village.  And paesani from Calabria, Basilicata and Sicily quickly realized that they had more in common with each other than with their American-born neighbors or with immigrants from other groups.  The abandonment of the campanile allowed Italian national identity to emerge – and that identity was swiftly grafted onto their adopted country.

It was a different story for Jews.  The strong patriotic bonds that Jewish immigrants developed with the United States flowed first from the sense of relief they felt at finally living in a country where they enjoyed a full measure of civil rights.  “What did I find in America?” one Jewish immigrant wrote.  “Above all, calm.  Here they won’t break down my door with the big boots and yell, ‘What are you doing, Yid?  What do you have there?  Move fast or you’ll be a head shorter!’  That is why I left the Old Country.”

That is why tens of thousands left.  Not since medieval Spain had Jews enjoyed a comparable level of freedom and legal protection, and their palpable gratitude fostered allegiances far stronger than those developed in the European nations whence they had come.  It is no coincidence that the great waves of early twentieth century Zionist immigration originated not in America but in Eastern Europe:  Jewish-Americans had by and large found their homeland, political and economic if not spiritual, and felt no need to relocate to the Holy Land.

The budding allegiance of these new immigrants was tested when the United States entered the Great War in April, 1917.  When a draft was instituted (necessitated by the paltry size of the U.S. Army and the relatively small numbers of volunteers), young male aliens were subject to conscription provided they had taken out their “first papers” declaring their intention to become citizens (immigrants from enemy nations were exempt).  Tens of thousands of immigrants were swept into the armed forces – in fact, by the end of the war, nearly one out of every five Doughboys had been born overseas.  National loyalty took on a whole new cast when it involved service in the army of a country that had yet to grant one citizenship.

Poles were a special case because they had a far greater stake in the outcome of the war than other immigrant groups.  Divided between Prussia, Austria and Russia since the eighteenth century, Poland stood poised to reemerge as a unified, independent nation in the clash of empires.  As a result, Polish-Americans were eager to involve their adopted country in the conflict.  Even before America’s entry into the war, hundreds of Polish-Americans signed on with a quasi-independent Polish nationalist army known as the Blue Army or Haller’s Army and organized under the auspices of the Polish Falcons.  Though they were fighting to free Poland, immigrant conscripts were fighting not as Poles but as Polish-Americans, and the majority returned to the United States when the fighting was over.

When the U.S. did enter the war, Polish-Americans rushed to enlist in the Army far more eagerly than any other immigrant group.  Some forty percent of the first hundred thousand men who answered Wilson’s call for volunteers were Polish, even though Poles made up only four percent of the U.S. population.  Heavily Polish Milwaukee raised an entire infantry battalion.  “Even though glory consisted of getting maimed or killed (and having your name misspelled in the newspapers),” writes historian Joseph A. Wytrwal, “Polish boys were the first and most numerous to respond when the call to arms was sounded.”

The glory of “getting maimed or killed” turned out to be a powerful factor in bolstering the national allegiance not only of Poles but of all immigrant groups.  “To go ‘home’ to the USA means more to us as immigrants fighting for our adopted country,” wrote Morris Gutentag, a Jew who emigrated from Warsaw in 1913 and served in the 77th Division.  “I was proud that I fought for and we won the war and all my family shared in that.”  Many felt the same way.  It remains a mystery why being forced to endure atrocities, filth, hunger, cold, mud, disease and the unspeakable horror of killing and being killed should engender pride and patriotism.  But hell is an essential part of the alchemy of war.  Talk to the descendants of Poles, Jews, and Italians who served in the Great War, and the word pride is inescapable.  Whatever reluctance these immigrants may have had to rally round the flag – any flag – was put to rest by military service

Poles, Jews and Italians would have assimilated had the Great War never happened; but there is no question that the military service of half a million alien soldiers was a watershed in the civic lives of the immigrant communities of the early 20th century.  In the trenches of France and Belgium, foreign-born soldiers became Americans the hard way – but the very hardship reinforced the bond.  National allegiance was a new concept for many of these immigrant families, but it has proved to be an enduring one.

Whether national allegiance to the U.S. will emerge as strongly in the large numbers of immigrants arriving today from Latin America and Asia remains to be seen.  One of the charges that opponents of immigration level against the current newcomers is that they refuse to assimilate.  These twenty-first century immigrants, so say the likes of Lou Dobbs and Pat Buchanan, crowd native-born Americans out of jobs; they absorb resources and services they are not entitled to; they replace our culture and language with their own – but they have no intention of becoming “real” Americans and they never will.  It’s useful to remember that Teddy Roosevelt voiced some of the same concerns when he railed against hyphenated Americans a century ago.  “There can be no fifty-fifty Americanism in this country,” proclaimed TR.  “The foreign-born population of this country must be an Americanized population – no other kind can fight the battles of America….We have room for but one flag, the American flag.  We have room for but one language here, and that is the English language.”

The “foreign-born population” TR referred to was, of course, predominantly Jewish, Polish and Italian – the very groups that today are among the most staunchly patriotic elements of American society.  That patriotism, it should be noted, has not been dampened by the current craze for genealogy and “roots” that has inspired so many second- and third-generation immigrants to ransack archives and web sites in search of their ancestors and to study the languages, cuisines histories and cultural traditions of their foreign-born forbears.

If last century’s hyphenated-Americans became “real” Americans, why shouldn’t the current groups?  Already Filipinos and Mexicans are contributing a hefty percentage of the troops in our volunteer army; if history is any indication, they, and their children, will become just as fiercely patriotic as the previous waves of immigrants.  Do this nation really have room only for “100 percent Americanism”?  The past century of unprecedented immigration and assimilation suggests otherwise.

An aggressive , rampaging, destructive, i.e. imperialist, USA certainly does not foster the willing heartfelt genuine assimilation of new comers or first or second or third generation hyphenated Americans when their, or their father's, homeland of birth or their cultural or confessional coreligionists are attacked and aggressed one way or another, by the USA.
That not only stands to reason but would be an indication of their intrinsic human worth and as such, ultimately, a source of comfort for older Americans.

Had there been enough volunteers to man the ranks for the US adventures in, say, Iraq, Afghanistan and Pakistan would, then, the USA have given birth to Black Water &Co and would the USA have contracted them?.

Is it not that the very existence of Black Water an indicator of what wars and adventures first, second or third generation and “true” Americans would, or would NOT, volunteer and contentedly die for?

I guess that this article together with Peter F. Stevens splendid article above “Mexican War Traitor, Hero, and Irishman: The Three Faces of John Riley” do answer the question.

Seems like the same desire that Mexicans have to live together was the same as Jews, Italians, Chinese or whomever. We have Little Italy, Chinatown as obvious examples,but also the Eastern Europeans around Pittsburgh who stayed together. Many of the older women never learned English.