A Lost Lyrical Commemoration of the Watts Rebellion

The episode of civil disorder known either as the "Watts Riots" or the "Watts Rebellion" is generally considered to have ended on this date in 1965, though the grievances driving the unrest arguably remain unaddressed.--ed. 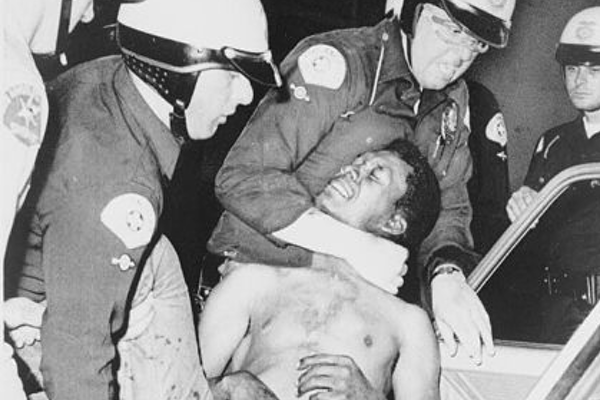 When It’s Summer in Los Angeles

When you can’t get a job, when people stare you in the face

When scores of sneering faces insult the color of your race

When it’s summer in Los Angeles what are you going to do?

The papers say that vandals are tearing up the street

Then they called in the national guard, it’s 1913 again.*

But everyone is tired of all the jailings and the fines

But you find that they are listening when this kind of trouble nears.

But when law and order bind you what conclusion can you draw?

When it’s summer in Los Angeles what are you going to do?

[Words and music by Michael Muench 1965, no copyright.]

*   “By the Associated Press: LOS ANGELES, Dec. 25.—Rafael Adames, a Mexican, was killed and fifty men were injured in a riot at the Plaza when the officers started to break up a meeting of nearly 1000 unemployed and hungry men, many of them Industrial Workers of the World and Mexicans. Nearly fifty of the rioters were arrested.”