75 Years Ago the First "Nuclear Race" Was in Hollywood

Greg Mitchell has written a dozen books.  This article is adapted from his latest, published this week, The Beginning or the End: How Hollywood--and America--Learned to Stop Worrying and Love the Bomb (The New Press). 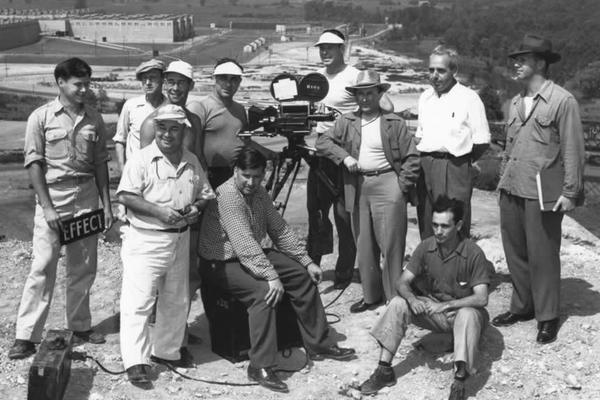 It took eighteen months after the first atomic bomb was dropped over the city of Hiroshima, on August 6, 1945, for Hollywood to produce a motion picture about the birth of the nuclear age. The movie studio almost never got that far. Over many months, MGM faced immense pressure for revisions--some leading to outright falsifications--from the director of the Manhattan Project, Gen. Leslie R. Groves, and from the White House, including President Harry S. Truman.  MGM also struggled to secure signed releases from the likes of Albert Einstein, Enrico Fermi, and J. Robert Oppenheimer, allowing them to be portrayed in the film.

After all of that, the docu-drama The Beginning or The End would debut in February 1947 to mixed reviews and a tepid box office.  It was, so to speak, something of a "bomb," but it survives today streaming and on DVD, and in occasional TV screenings via Turner Classic Movies.  It will forever hold the distinction of being the first Hollywood movie on the bomb, but to achieve that it had to beat out a rival production from Paramount, which touted a screenplay written by novelist Ayn Rand.

The New York Times labeled this the "Atom Sweepstakes" but it could also be called the first "nuclear race" of the postwar era.

How did it begin, back in October 1945?  The catalyst, oddly enough, was young actress Donna Reed, still a few years shy of her Academy Award-winning performance in From Here to Eternity and then her role in the long-running TV series that bore her name.

The bomb had already made its first appearance in a Hollywood movie, albeit in a cameo role. A minor RKO movie called First Yank Into Tokyo had been rushed into release in mid-September with a tacked-on ending. First Yank told the improbable story of an American pilot, Major Steve Ross, who undergoes plastic surgery to look Japanese so that he can infiltrate a brutal POW camp in Tokyo and rescue an American scientist. A new epilogue showed a U.S. bomber in flight while a narrator explained that "a group of scientists made untold sacrifices so that this B-29 could make its bomb run over the heart of the Japanese empire, bringing final and terrible retribution."

Two other movies also bluntly added Hiroshima references before release. The spy thriller House on 92nd Street, featuring an introduction by J. Edgar Hoover, had focused on Nazi agents in New York attempting to penetrate a secret wartime project known as "Process 97."  Now dialogue was added to link that to the atomic bomb. A low-budget movie, Shadow of Terror, pictured an American scientist carrying a secret formula to Washington, D.C.--later to be revealed as nuclear in nature--who was threatened by foreign agents.

Then a letter addressed to Donna Reed arrived at her oceanfront Santa Monica home on October 28, 1945.  It came from her beloved high school chemistry teacher back in Denison, Iowa.  She had stayed in touch with Edward Tompkins for a few years after graduation but then he suddenly vanished, and had not responded to her letters.

That autumn, she had signed for her biggest role yet, as the wife of James Stewart in Frank Capra's It's a Wonderful Life. At the same time she finally discovered what had happened to Ed Tompkins. A newspaper story revealed that he had helped create the atomic bomb at the top-secret Manhattan Project site in Oak Ridge, Tennessee. After reading the article, she sent him another letter, this time care of Oak Ridge.

Soon she received a reply. "The development of atomic explosives necessitates a reevaluation of many of our previous modes of thought and life," he began. "This conclusion had been reached by the research scientists who developed these powerful new explosives long before August 6, 1945." That, of course, was the day the first atomic bomb exploded over Hiroshima, killing more than 125,000, the vast majority of them women and children. Three days later, Nagasaki met the same fate, with a death toll reaching at least 75,000.

Americans, weeks after the Japanese surrender, were relieved that the war was over but nervous about atomic energy. Scientists, political figures and songwriters alike were sounding a similar theme—splitting the atom could bring wonderful advances, if used wisely, or destroy the world, if developed for military purposes. Atomic dreams, and nightmares, ran wild. “Seldom, if ever, has a war ended leaving the victors with such a sense of uncertainty and fear,” warned radio commentator Edward R. Murrow, with “survival not assured.”

In the letter to his former pupil, Tompkins explained that the scientists' initial "excitement" and pride in what they had accomplished was now subsumed by soul-searching. Thousands of Manhattan Project scientists had now formed associations in Oak Ridge, Chicago, Los Alamos and New York to deliver their warnings and "to foster thought and discussion which can lead to adoption of international control of atomic energy."  Contrary to claims by military leaders and politicians, there was "NO possibility" that the U.S. could keep a monopoly on these weapons. The so-called "secret" of the atomic bomb was known internationally. The Soviets, for example, would surely build their own bombs within a few years.

But what did Donna's old chem teacher want her to do about it? "Do you think a movie could be planned and produced," he asked, "to successfully impress upon the public the horrors of atomic warfare.... It would, of course, have to hold the interest of the public, and still not sacrifice the message. Would you be willing to help sell this idea to MGM?"

Well, that was a lot for Donna Reed, or anyone, to digest. Just seven years earlier the same man had been delivering quite a different lesson in a classroom. Fortunately she had someone to share it with. This was her new husband, Tony Owen, a slick, fast-talking dynamo who was thirteen years her senior.

In short order Owen would confer with MGM producer Sam Marx, who would take him to meet with Louis B. Mayer, the legendary studio boss. Mayer would greenlight the project, vowing to make it "the most important" movie he had ever produced.  Owen and Marx flew to Oak Ridge to meet with Tompkins and his colleagues, and then to Washington to confer with General Groves and various officials. Soon they were even sitting down with President Truman in the White House, who blessed the project and even supplied the title for it when he told them:  "Make your film, gentlemen, and tell the world that in handling the atomic bomb we are either at the beginning or the end."

Within weeks, the Hearst columnist and author of 30 Seconds Over Tokyo, Bob Considine, had written a lengthy treatment, and the famed flyer turned screenwriter (They Were Expendable) Frank "Spig" Wead had drafted a script. Academy Award-winning director Norman Taurog was hired, as were Brian Donlevy to portray Groves and Hume Cronyn to play Oppenheimer.

However, Paramount was running at least even in this race for the first A-bomb movie.  Hal B. Wallis, who had produced Casablanca among others, had also announced his film, Top Secret, as a big-budget drama. He assigned Ayn Rand, then back on the bestseller list with her novel The Fountainhead, to write the script. She worked for Wallis six months of every year, and had recently penned for him the Oscar-nominated Love Letters.

Rand wrote a detailed outline of her ideas for the story, which true to her beliefs, took an aggressively pro-capitalist, pro-individual, approach. She planned to grant little credit to President Franklin D. Roosevelt, for example, while lavishing it on American industry and "unharnessed" scientists. Only the freedom-loving United States could have invented the bomb.  She even managed to interview General Groves as well as the reclusive Oppenheimer (twice), among others.

The New York Times followed the competition closely. The two studios were in a "Race to Produce First Film History of the Atomic Bomb," one headline boomed.

Then, in March 1946, Hal Wallis suddenly threw in the towel, trading Paramount's research and all materials, including Ayn Rand's script, to MGM in return for a share of future profits. Wallis had become disenchanted with Rand's screenplay and had hired another writer to start working on an alternative. It's also believed that he had grown weary of chasing so many famous figures for the rights to be portrayed.

But did MGM win the battle but ultimately lose the war?  For months it had to make dozens of cuts and revisions under orders from Groves, who had been paid the then-hefty sum of $10,000 to serve as chief adviser--and essentially granted  him script approval. President Truman ordered a costly re-take of a key scene to bolster the case for his decision to drop the bomb. He also got the actor playing him fired.

By the time it premiered in February 1947, all of that amounted to little. Eighteen months had now passed since the arrival of the bomb and the movie failed to excite audiences or critics. Time magazine laughed at the film's "cheery imbecility."  Hal Wallis didn't make out very well, as there were no profits from the film, which   made his share worthless. At least Ayn Rand did get something out of it:  She would base Robert Stadler, one of the key figures in her next novel, Atlas Shrugged, on Oppenheimer.

Adapted from the new book, The Beginning or the End: How Hollywood--and America--Learned to Stop Worrying and Love the Bomb (The New Press)