Did Jefferson Think Humans Occupied a Privileged Position in the Cosmos?

M. Andrew Holowchak, Ph.D., is a philosopher and historian, editor of "The Journal of Thomas Jefferson's Life and Times," and author/editor of 14 books and nearly 100 published essays on Thomas Jefferson. He can be reached through www.mholowchak.com. 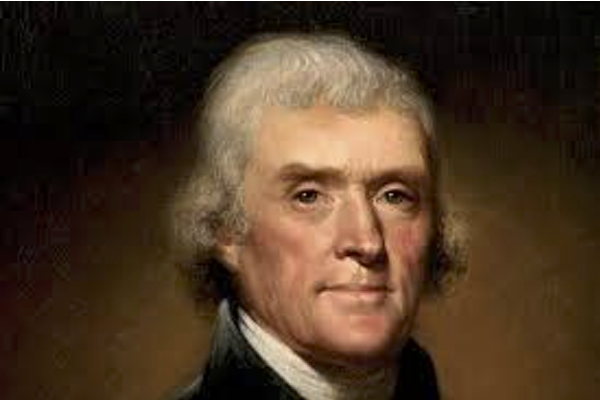 Philosopher and mathematician Blaise Pascal writes in his Pensées: “In the end, what is man in nature?  A nothing compared to the infinite, and everything compared to the nothing, a midpoint between nothing and everything, infinitely removed from understanding the extremes:  the end of things and their principle are hopelessly hidden from him in an impenetrable secret.” The sentiment was not an existential gaffe, motivated by utter human despair. It was a sincere attempt by a deeply religious illuminato to understand man’s place in the cosmos, whose secrets were increasingly becoming known to investigators.

The supreme triumph would come, after Pascal’s death, with publication of Isaac Newton’s Principia Mathematica in 1687. Newton, who built on the findings of men such as Brahe, Kepler, and Galileo, discovered laws that were deemed applicable to all bodies far and wide, and the cosmos, from the time of early Greek antiquity with Anaximander and Democritus, had been thought to be of gargantuan proportion, if not infinite in extent. In Ptolemy’s (second century A.D.) words, “The earth has the ratio of a point to the heavens”—a sentiment iterated in 1543 by Copernicus, who merely replaced the position of the earth with that of the sun.

Newton’s discoveries set off an array of reactions by other illuminati of the day.

The French mathematician Pierre Simon Laplace—noting that all bodies, humans being bodies too, were subsumable under the law of gravitational attraction—thought that humans held no special status in the cosmos. A man who leaps from a steep precipice will invariably fall in the same manner as a stone dropped from the same precipice. Laplace famously responded when asked about God’s role in the cosmos: “I have no need of that hypothesis.”

On the other hand, philosopher Baruch Spinoza said that God was the infinite and necessarily existing substance of the universe. “By God I understand a being absolutely infinite, i.e., a substance consisting of an infinity of attributes, of which each one expresses an eternal and infinite essence.” Spinoza’s God was the universe.

Still others, having marveled at the nomological status of the cosmos revealed by Newton and working backward to a cause of that structure, saw God as the Demiourgos or Craftsman of the cosmos. David Hume was among them. He wrote through the mouth of Philo in Dialogues Concerning Natural Religion: “That the works of nature bear a great analogy to the productions of art is evident…. Here, then, the existence of a DEITY is plainly ascertained by reason.” There was the proviso, however, that the cosmos, as a crafted thing, was prodigiously unlike, in size and complexity, anything humanly crafted.

Just where did humans fit in the wondrous and gargantuan cosmos for Thomas Jefferson? Were they, as Pascal had said, mere nothings in comparison to everything and everything in comparison with nothing?

Jefferson for the most part followed Humean path.

In his essay “On Suicide,” Hume says: “The providence of the deity appears not immediately in any operation, but governs every thing by those general and immutable laws, which have been established form the beginning of time. All events, in one sense, may be pronounced the action of the almighty: They proceed from those powers, with which he as endowed his creatures.” Even the actions of humans are god-caused, as the human faculties are as much the workmanship of deity as are the laws of motion and gravitation. “When the passions play, when the judgment dictates, when the limbs obey; this is all the operation of God; and upon these animate principles, as well as upon the inanimate, has he established the government of the universe.” Moreover, no event is unimportant to deity, “who takes in, at one glance, the most distant regions of the space and remotest periods of time,” and all events are subject to the “general laws that govern the universe.” There is no room for free human agency.

Hume’s deity is manifest through observing the cosmos, but his activity is not direct, but indirect. As with the ancient Stoics, event is linked with event by causal concatenations such that no event is arbitrary. Deity is responsible for all bodies in the universe, their patterns of behavior, and the laws fixing such patterns. In that regard, “all events … may be pronounced the action of the almighty.” If there is a small break in fixity of events, that breach is subtle—undetectable to human perception. Given deity’s equal attention to all details, we can thus grasp that the sense of Hume’s intriguing comment later in the same essay, “The life of man is of no greater importance to the universe than that of an oyster,” is not meant pejoratively, but as a verbal dislodgement of anthropocentric biases humans might have concerning deity and the cosmos. The universe is a vast and complex network of events, causally concatenated, and humans, like oysters, are parts of that network.

Like Hume’s, Jefferson’s cosmos is no accident. It gives unmistakably evidence of design—cause linked with effect. He writes in a letter to John Adams (11 Apr. 1823) in a manner similar to Hume: “I hold (without appeal to revelation) that when we take a view of the Universe, in it’s parts general or particular, it is impossible for the human mind not to percieve [sic] and feel a conviction of design, consummate skill, and indefinite power in every atom of it’s composition.” The heavenly bodies are exactly held in course by “the balance of centrifugal and centripetal forces.” The earth’s structure—with the proper proportion of land, water, and air, and with minerals, vegetables, and animals perfectly organized and of numerous uses—“it is impossible … for the human mind not to believe that there is, in all this, design, cause and effect, up to an ultimate cause, a fabricator of all things from matter and motion, their preserver and regulator while permitted to exist in their present forms, and their regenerator into new and other forms.” In addition, there is evidence of superintendency. Old stars evanesce; new stars are born. Some races of animals have become extinct: “were there no restoring power, all existences might extinguish successively, one by one, until all should be reduced to a shapeless chaos.” So obvious is the design of the cosmos that for every atheist—atheism for Jefferson being inconsistent with morality—there are one million believers.

The causal structure literally bespeaks a creator that works not ex nihilo, but from matter and motion. Deity, preserves, regulates, and regenerates. The regeneration is best attributable not to imprescriptible divine intervention in the regularity of nature—Jefferson’s eschewal of thaumaturgy in construction of his two bibles is evidence of that—but to prescribed changes in things, written into the laws of nature, and dispositions of material things. Thus, superintendency works in the manner of a thermostat, once installed in a house, regulating the temperature of that house. The notions of “perceive” and “feel”—derived from Destutt de Tracy’s epistemology, and consistent with Lord Kames’ notion of intuitive perception—demonstrate that the argument is not analogical. On close inspection, one forms an immediate sensory impression, not unlike the impression one forms of an action, morally correct, given sanction of the moral sense.

Jefferson’s cosmos is substantially similar to that of Hume, though Hume—“the comparison of the universe to a machine of human contrivances is so obvious and natural, and is justified by so many instances of order and design in nature, that it must immediately strike all unprejudiced apprehensions, and procure universal approbation”—seems to argue for deity from analogy, not direct perception.

Finally, like Hume’s deity, Jefferson’s God is immune to supplication. Jefferson writes to Miles King (26 Sept. 1814): “[Deity] has formed us moral agents. Not that, in the perfection of his state, he can feel pain or pleasure from any thing we may do: he is far above our power: but that we may promote the happiness of those which whom he has place us in society, by acting honestly towards all, benevolently to those who fall within our way, respecting sacredly their rights bodily and mental, and cherishing especially their freedom conscience, as we value our own.” Though deity is immune to supplication, humans have been fashioned by God to be responsible for their own happiness.

So, did Jefferson think humans occupied a privileged position in the cosmos?

To answer that question, we must give some account of Jefferson’s view of humans’ moral sense. Whereas Hume argues that morality is a matter of sentiment, Jefferson describes morality as due to a god-granted sensory faculty. He writes to John Adams (14 Oct. 1816). “I believe that it is instinct, and innate, that the moral sense is as much a part of our constitution as that of feeling, seeing, or hearing; as a wise creator must have seen to be necessary in an animal destined to live in society: that every human mind feels pleasure in doing good to another.” Jefferson, in a letter to Peter Carr (19 Aug. 1785), compares the moral sense to a limb, whose functionality is perfected with proper use or is debilitated through overuse or underuse. The notion of proper use, for the sake of moral accountability, is critical, and here the analogies with a sensory organ or a limb invite different ways of cashing out proper use. Furthermore, the statement that it has been implanted “in an animal destined to live in society”—and this is a point that other scholars have failed to notice—does nothing to privilege humans in their rank among other animals. It makes it plausible that Jefferson believed other social animals—vertebrates such as bats, crows, elephants, dolphins, horses, and lions, and invertebrates such as ants, bees, termites, and wasps—because of their sociability, have a similar sense of morality, species specific.

That interpretation, however, creates a gargantuan difficulty. Jefferson’s writings are suffuse with references to humans seemingly having a privileged position in the cosmos. Most of those references, however, are merely the result of political posture or epistolary politeness. Other references are consistent with Hume’s statement that oysters (and other living things) are the equals of humans when it comes to cosmic significance, because all are significant parts of a massive cosmic network of events, causally linked. There is much to be gained by reading Jefferson in a Humean light. How we think of who we are in large part determines who we are.