Say It Ain't So Joe: Strategies of Segregation in Ventura County

Frank P. Barajas is a professor of history at California State University Channel Islands and the author of Curious Unions: Mexican American Workers and Resistance in Oxnard, California, 1898-1961. 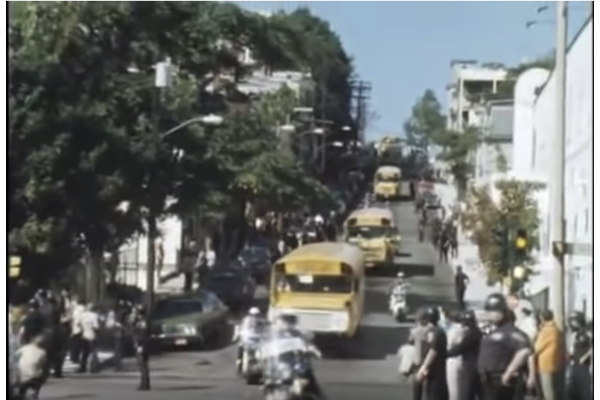 A protest of desegregation busing in Boston, 1974

From the last Democratic debate, we learned that in the 1970s Joe Biden opposed federally mandated busing to desegregate schools because he believed it was a dilemma to be reckoned with by local government.

To be fair to Joe, most people—black, brown, and white—at the time liked their neighborhood schools.

White-collar professionals purchased homes significantly based on the public school that came with them—historically better resourced than those in black and brown communities systematically concentrated in the nation’s inner cities.

Less affluent minority parents, too, simply desired equally funded neighborhood schools with effective teachers friendly to the needs of their children. And for many others, a culturally relevant curriculum that instilled an amour propre in students from diverse backgrounds was a plus.

Largely absent from today’s public conversation on mandated busing is the racism that created segregated neighborhoods in the first place and translated to poorly funded schools for minority children. As Eric Avila in Popular Culture in the Age of White Flight: Fear and Fantasy in Suburban Los Angeles (2004) and Richard Rothstein in The Color of Law: A Forgotten History of How Our Government Segregated America (2017) detail, in the 1930s, Federal Housing Authority policy, via the Home Owner’s Loan Corporation, created a redlining system that encouraged real estate interests (lenders, developers, and agents) to concentrate people of color away from white homeowners.

This was the history behind the desegregation case of Soria v. Oxnard School District Board of Trustees (1971) in Ventura County, California.

As David G. García details in Strategies of Segregation: Race, Residence, and the Struggle for Educational Equality (2018), since the 1930s, the Oxnard School District accommodated white homeowners who did not want their children socializing with Mexican children, primarily, as they were the largest non-white demographic.

As limited funding and facilities made complete segregation impossible, OSD administrators, upon the direction of trustees, gerrymandered attendance boundaries and schedules to separate students as much as possible.

To maintain this system, during the next two decades the OSD constructed two segregated Mexican schools in the 1940s less than one block away from each other. When these sites overcrowded, the district imported portables classrooms and constructed new campuses nearby.

Ten years after Brown v. Board of Education 1954, the Community Service Organization, an ethnic Mexican civil rights group, and the National Association for the Advancement of Colored People of Ventura County protested the segregationist practices of the OSD trustees.

The district contended that de facto school segregation was an outcome of residential patterns outside its purview.

As the City of Oxnard grew, the CSO and NAACP persistently petitioned the OSD to remedy racial imbalances in the schools. The board rejected all of the numerous desegregation plans proposed by Althea Simmons, field secretary of the Los Angeles chapter of the NAACP andits own advisory committee.

Fed up with the intransigence of OSD trustees, black and ethnic Mexican parents filed the Soria case in 1970 in federal court. In May 1971, Judge Harry Pregerson’s  summary judgement found that both de facto and “de jure overtones” of segregation consisted of, but were not limited to, the creation of new schools, individual intra-district transfers via busing, and the use of portables to keep black and brown students concentrated in segregated schools.

These were constitutional violations of equal protection under the 14th Amendment. As a result, Judge Pregerson mandated a paired-schools busing plan as a remedy.

That September buses transported children of the barrio to their paired schools in the city’s more middle-class neighborhoods and vice versa. Like Kamala Harris in Berkeley at this time, as a first grader I, too, was bused from an ethnically integrated neighborhood of black, brown, and Asian American families in south Oxnard to Brittell Elementary in the predominantly white, northern part of the city.

In November of 1973, the U.S. Ninth Circuit Court of Appeals vacated Judge Pregerson’s summary judgment and remanded the case for a trial. Subsequently, board minutes of the 1930s surfaced that evidenced the de jure segregation of Mexican children to appease white parents. Former OSD superintendents, including Los Angeles County Superintendent of Schools Dr. Richard Clowes, also testified that up to and throughout the 1960s, trustees maintained segregation.

Based on prior and fresh findings, Judge Pregerson ruled in favor of the plaintiffs and busing continued. The need to bus students faded through the 1980s as the City of Oxnard increasingly browned. Its cause: a middle-class flight of diverse races and ethnicities to the neighboring communities of Camarillo and Ventura.

But as the demographics of these communities shifted over time, flight renewed. People moved further eastward, if able, to Newbury Park and Thousand Oaks.

Hence, a more insidious segregation exists today as people of all colors and creeds troll education and real estate websites for school rankings. The systemic outcome: the segregation of largely black and brown students, again.

If a school’s status dips and the number of brown students rises, some parents, if they can, will take one of the following steps: move to whiter more affluent neighborhoods or commute their children to higher performing and less racially diverse schools.

Without the segregationist mentors who Joe Biden proudly worked with as U.S. Senator in the 1970s, this is the new face of de facto school segregation.