Mothers and Food Aid from World War One to Today

William Lambers is an Ohio based author and journalist. He partnered with the UN World Food Programme on the book Ending World Hunger. His writings have been published by the New York Times, Cincinnati Enquirer, the Cleveland Plain Dealer, the Huffington Post, the Hill and many other news outlets. 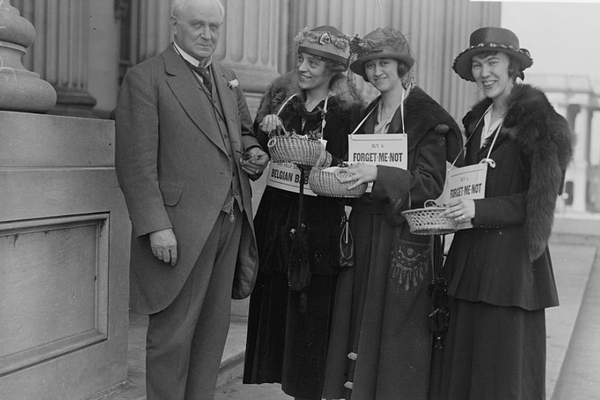 Before Mother’s Day in 1918 you might have heard this chant if you were walking in New York City: “Ten cents for a Belgian baby. Forget-me-nots for Belgian babies.”

Volunteers were selling Forget-me-not flowers to raise funds for the Belgian Babies Fund. The Girl Scouts invaded the financial district, according to the New York Tribune, to get people to buy the flowers. Just by buying a Forget-me-not you were giving the best Mother’s Day gift: food to save the life of her baby.

Little children were starving to death in Belgium because of World War One. Germany occupied Belgium and the fighting had caused food shortages. The fundraising for Belgian babies was nation-wide throughout 1918. The Cincinnati Enquirer urged sales of the flower writing, "It is appropriate and fitting that the fund for Belgian babies is to be swollen by the sale of forget-me-nots. That dainty little flower is perennial, conveying the thought that our loving remembrance of the waif's of Belgium will not be sporadic and uncertain, but, like the flower itself, recurrent and constant.” Every flower purchased was food for a hungry Belgian child.

In St. Louis, 12-year old Josephine Windy had a special reason for volunteering. She was born in Belgium. Josephine told the St. Louis Post-Dispatch “I want to volunteer my services to aid the Belgian babies. Two of my cousins live in Belgium and their parents have died since the war began. I have an uncle now fighting in France.”

Josephine waited at the Mayor’s office to get his donation and kick off a day of fundraising in St. Louis to save more babies from malnutrition.

Donations from America rescued many from starvation in Belgium and Europe. A whole system of food aid, led by Herbert Hoover, was developed to fight the famine caused by World War One.

We must remember the horror Belgian mothers felt, seeing their baby dying from malnutrition, still exists today. The scenes of despair have moved to other war-stricken nations like Yemen, South Sudan, Syria, Afghanistan, and Mali.

As you read this, the World Food Program, UNICEF, Save the Children, Mercy Corps, World Vision and other relief agencies are trying to get life-saving food to children.

In Yemen 85,000 kids have died of hunger and disease caused by the civil war there, according to Save the Children. There is a race against time to save millions of others from this fate.

Tragically, funding is not able to keep pace with the massive hunger emergencies. We can and must do better. The Yemen hunger crisis is so large that 20 million people are food insecure in the impoverished country. That is about 70 percent of Yemen's population.

In Yemen, Afghanistan or anywhere how can we expect peace to emerge if children are starving and malnourished?

The Rhode Island non-profit Edesia has been producing a special food for infants in Yemen called Plumpy’Nut and Plumpy’Sup. This enriched peanut paste saves infants from deadly malnutrition. Edesia works around the clock to produce this food so it can be sent to relief agencies in Yemen, South Sudan, Sierra Leone and other desperate nations.

A child’s treatment with Plumpy-Nut costs about 50 dollars. For that little amount you can save a life, just how people did when buying flowers for the Belgian Babies Fund.

There are millions of mothers across the world right now desperate to save their children from malnutrition. On Mother’s Day, and every day, we should take action to help them. We should feed every hungry child in the world. Like the Forget-me-not flower, our feeding of starving children everywhere should be "recurrent and constant."