by Steven Levitsky and Daniel Ziblatt

Steven Levitsky and Daniel Ziblatt are Professors of Government at Harvard University. Levitsky’s research focuses on Latin America and the developing world. He is the author of Competitive Authoritarianism and is the recipient of numerous teaching awards. Ziblatt studies Europe from the nineteenth century to the present. He is the author, most recently, of Conservative Parties and the Birth of Democracy. Both Levitsky and Ziblatt have written for Vox and The New York Times, among other publications. 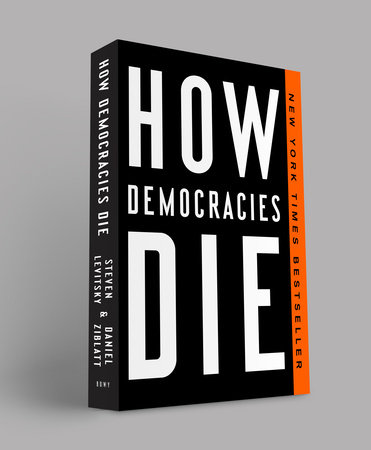 A conversation with Steven Levitsky and Daniel Ziblatt, authors of HOW DEMOCRACIES DIE. (Excerpt)

You have developed a litmus test to help identify autocrats before they come to power. What are the four behavioral warning signs that comprise the test, and how many of them did Trump test positive for, even before his inauguration?

The idea is that certain politicians, in effect, show their cards before they even come into office. Their authoritarian inclinations are revealed by testing positive on what the eminent political scientist Juan Linz called a “litmus test.” We further developed this framework and propose four warning signs that all citizens of a democracy should look for in a political leader as he or she runs for office. If a candidate tests positive on any part of this test, we should be nervous. The first indicator is if a politician, in words or practice, appears to reject the democratic rules of the game; the second is whether they deny the legitimacy of their opponents; and the third is whether they appear to tolerate or encourage violence. Finally, we should also be alarmed if a politician expresses a willingness to curtail the civil liberties of their opponents, including the media. In some countries, you see candidates like this quite often; thankfully, it is much rarer in the United States. With the exception of Richard Nixon, no major-party presidential candidate met even one of these four criteria over the last century. Donald Trump, when running for office, tested positive on all four indicators.

Aren’t demagogues “all talk”? Why should we worry about extremist rhetoric or outbursts on Twitter?

There are several reasons why we believe words should be taken seriously. First, in our studies of demagogues around the world, words are usually followed by action. In Peru, when candidate Alberto Fujimori was running for office, he railed against elites; when he came into office, he acted on his fury. Hugo Chávez did the same thing in Venezuela. Further, words reflect and shape unwritten rules of behavior. When broken taboos lead to great electoral success, norms shatter and other demagogic politicians are tempted to imitate norm breakers. Norm breaking can be dangerously contagious. When a politician receives applause when threatening the press, other like-minded politicians are encouraged to do the same. In this way, a political system, sustained by shared standards of what is acceptable, can begin to deteriorate. But this is not the end of it. As language becomes more extreme, the opponents of demagogues grow frightened and feel compelled to respond in kind. A tit-for-tat extremism can be unleashed. The results are not good.

The U.S. Constitution is one of the most revered and imitated documents in modern history. Isn’t our democracy safe as long as it remains in place?

We have to remember something critically important about our Constitution: At the end of the day, it is only a piece of paper. It is not self-enforcing. As with all written rules, the Constitution’s effectiveness has worked well in our history not just because of the words written into parchment, but also because politicians and citizens have usually acted in ways that support the words. There has been a lot of talk about norms and norm breaking since Donald Trump came into office. But for all the talk, commentators often have difficulty focusing on which norms matter the most for our democracy. We think two norms in particular carry a lot of weight in the American political system. The first is “mutual toleration”—not treating political rivals as existential enemies, but rather as fellow loyal Americans. The second is “forbearance,” or restraint—by which we mean that leaders don’t “play politics to the max,” using all the legal power you have a right to in order to destroy your rivals. Think of this example: From a strictly legal perspective, it is amazingly easy to impeach a president, requiring only a simple majority in the House. To remove a president requires a two-thirds vote in the Senate. But this action has been rare in American politics, which is a good thing: If every time we disagreed with a president we tried to impeach him, American democracy wouldn’t have lasted as long as it has. But the rarity of the use of the impeachment tool is not a function of the Constitution, or because the Constitution makes it difficult; it is because American politicians have long held a norm to act with forbearance in this domain—to use this incredibly powerful weapon only under exceptional circumstances. There are times when impeachment might be called for. But given the relatively low constitutional threshold, the only thing preventing impeachment from becoming a regular and highly disruptive tool of politics—which, by the way, it has become in other countries—is not the written Constitution but a shared norm of restraint. What frightens us today is that there are signs that forbearance is decaying.

We have become accustomed to reading about democratic decline in other parts of the world, but you argue that America experienced its own form of democratic collapse in the post–Civil War Reconstruction Era. Can you explain?

The United States first experienced a democratic breakdown of sorts during the Civil War. Our democracy—imperfect as it was at the time—was, in effect, entirely suspended in a third of the country during the war, and after the war many Southern states were placed under military rule. Following Reconstruction, the U.S. South underwent one of the most dramatic instances of de-democratization in history. After the 1867 Reconstruction Act and the Fifteenth Amendment barred suffrage restrictions based on race, African Americans suddenly constituted a majority or near-majority of the voting population throughout most of the former Confederacy. African Americans registered and voted in large numbers. In 1880, for example, black turnout surpassed 65 percent in much of the South. But over the next two decades, every Southern state adopted laws—such as poll taxes and literacy requirements—aimed at disenfranchising African Americans. By 1912, black turnout in the South had plummeted to under 2 percent. African Americans were thoroughly disenfranchised, an extraordinarily antidemocratic act. And because black citizens were overwhelmingly Republican, their disenfranchisement wiped out the Republicans’ electoral base in the South, which allowed the Democrats to establish single-party rule. In other words, the U.S. South descended into authoritarianism in the late nineteenth century—and remained authoritarian for nearly a century.

When did “politics as warfare” begin in earnest in the United States?

It has been a gradual spiral, worsening over time. But “politics as warfare” seemed to take off after Newt Gingrich replaced Bob Michel as the House Republican leader in the early 1990s—and then the Gingrich-led Republicans won control of the House in 1995. Under Gingrich and his allies, House Republicans adopted a “win at any cost” mentality, embracing the use of tactics such as government shutdowns and even presidential impeachment as partisan weapons.

You argue that racial and religious realignment and growing economic inequality are the major forces driving the extreme political polarization in America. Can you explain?

Scholars have shown a long-standing relationship—dating back to the nineteenth century—between income inequality and polarization. The dramatic increase in inequality since the 1970s, together with the absence of serious campaign finance regulation, is clearly one of the factors pulling the Republicans to the right. But a dramatic change has also taken place in our party system. The American electorate has grown much more diverse since the 1960s: African Americans finally gained full voting rights in the South, and immigration expanded America’s Latino and Asian American communities. So the nonwhite share of the electorate grew dramatically. Most of these new voters became Democrats, while Southern whites fled the Democratic Party for the Republicans. At the same time, evangelical Christians flocked to the GOP starting in the 1980s. So whereas half a century ago the Democrats and Republicans were both white and Protestant, the parties are now divided by race and religion. This is a big deal. Partisan differences aren’t focused just on taxes and spending anymore; they now encompass our identities and culture. And, crucially, the Republican Party has become the political home for white Protestants—a majority ethnic group in decline. This is the underlying source of the party’s radicalization. White Protestants, who long sat atop the American social pyramid, are losing their dominant status in the face of growing diversity and racial equality. Many feel that their country is being taken away from them, which, together with disappearing economic opportunities, fuels the anger and extremism we see in movements such as the Tea Party. This, and the unraveling of the party leadership’s control over its own base, has tragically pushed the GOP toward extremism.

In HOW DEMOCRACIES DIE, you discuss the various ways that elected authoritarians seek to consolidate power. How many of them has Trump attempted?

Looking around the world, we identified three strategies that elected authoritarians commonly use, and were dismayed to discover that Trump has tried all of them. The first is capturing the referees, which means gaining control over the courts and key investigative, regulatory, and law enforcement agencies. The second is sidelining key players—such as media owners, wealthy businesspeople, opposition politicians, or prominent cultural figures—who could rally public opposition. This is done by either buying them off or by using “legal” measures such as tax audits or corruption investigations to bully them into silence. The third is trying to rewrite the rules of the game—for example, constitutional and electoral rules—to permanently weaken or disadvantage opponents. Trump has implemented all three strategies: His firing of James Comey is an example of the first; his attacks on the media are an example of the second; and the campaign to impose tougher restrictions on voter registration is an example of the third. But so far most of his threats haven’t been carried out; he’s been thwarted by the courts or local governments.

Is there a foreign leader, past or present, who you feel has particular similarities to Donald Trump?

No one is quite like Trump. He uniquely combines three important features: First, he is a wealthy political outsider, like Berlusconi in Italy and Thaksin in Thailand; second, he has clear authoritarian instincts, like Correa in Ecuador or Erdoğan in Turkey; and third, in terms of personal character, he is deeply unfit for office. Few other leaders combine all three of these traits.   ...