What Happened When Aaron Burr, Late in Life, Encountered this Statue of Alexander Hamilton

Donald Yacovone is an Associate at the Hutchins Center for African and African American Studies, Harvard University and an Athenæum member. 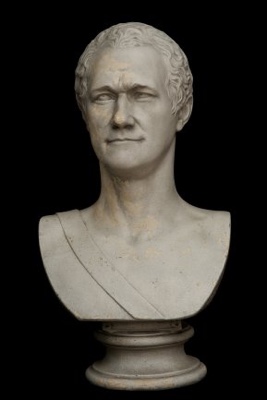 When memory and history meet, sometimes irony is the result. The Broadway smash hit Hamilton, which is now engaged in a raucous Boston run, plays to the utter delight and elation of sellout throngs. It is scheduled go on tour to 27 towns after Boston, and the public shows no sign of flagging interest. Indeed, the more people see it, the more people will want to see it.

A few years ago if one heard that a Broadway play was in development about the Founding Fathers and creation of the national debt, all put to rap music and performed by African American actors, I would wager that no one would have predicted it would ever be performed, much less become a national sensation. But the great genius of Lin-Manuel Miranda is that Hamilton is a play about ambition, fame, and the creation of the United States, all put to arresting music, brilliant lyrics, astounding performances, and streaked with gripping tragedy. It pivots on the historical relationship of the mastermind of American political theory and finance Alexander Hamilton (1755?-1804) and his former friend-turned nemesis, the adventurer, former senator, and vice-president Aaron Burr (1756-1836).

Alexander Hamilton has always been honored as a critical Founding Father—dashing, handsome, brilliant, and indispensable to creation of the United States. As a child, his favorite authors were Pope and Plutarch. The illegitimate child of Rachael Fawcett Lavien born on the island of Nevis in the British West Indies, Hamilton became, perhaps, the nation’s most illustrious emigrant, and as the play justly asserts, George Washington’s right hand. He embodies American drive, ambition, and determination as no other could and, as is sung throughout the play, he will endure, succeed, and will never “throw away his shot.” The ultimate irony, of course, is that he counsels one of his sons to do just that, which leads to his death in a duel and to Hamilton’s own identical demise on the bloodied ground of Weehawken, New Jersey, in 1804.

Aaron Burr, on the other hand, about the same age and equally ambitious, as his competitor clearly never attained the same esteemed place in American history. As Stanley Elkins and Eric McKitrick wrote in their 1993 Age of Federalism, for nearly all historians, Burr remains “an enigma.” The grandson of the American theologian Jonathan Edwards, Burr nonetheless has been seen as the “dark side” of the force, seeming to represent pure greed, unalloyed ambition, “not” as Elkins and McKitrick asserted, a “representative man” but a “deviant type.”

Drawing on what historians have written about Burr, the novelist Gore Vidal pronounced Aaron Burr “a man of perfect charm and fascination. A monster, in short.” In his highly amusing and perceptive novel, Vidal played the role of Burr’s biographer and described him as “the devil—assuming that the devil is no more than five foot six (an inch shorter than I), slender, with tiny feet (hooves?), high forehead (in the fading light I imagine vestigial horns), bald in front with hair piled high on his head, powdered absently in the old style, and held in place with a shell comb.” He and Burr visited a New York cemetery. “Behind him is a monument to the man he murdered.”

The play’s true genius, however, is in reeling Burr back into the American mainstream and in giving him near equal authority, punctuating the American fixation with self-ascendency, greed, power, and ambition. He is not, as Gore Vidal crafted him, a devil in a periwig. Seeking to “correct” Hamilton’s faults, the well-intentioned Burr advises his friend that the problem with you is that you tell people exactly what you think. Saying less, he advised an attentive but resistant Hamilton, is the sure way to power.

Miranda’s Hamilton, based on the biography by Ron Chernow, melds history and creativity to play with American memory, to change how we think about our past and ourselves. Key, of course, is having the characters performed by immensely talented African American actors and actresses. It challenges our all-too-comfortable—and often ill-informed—understanding of the past. It forces us to rethink who we have been and, one hopes, what we should be.

But this is not the first time Hamilton and Burr made an appearance in Boston. While I was researching a book on the great Boston abolitionist and labor activist Wendell Phillips at the Athenæum, I came across the 1890 biography of Phillips by the popular author Carlos Martyn. Phillips, son of the city’s first mayor, lived at the foot of Beacon Hill in a house designed by Charles Bulfinch, with the Common as his front yard. A graduate of Harvard College and the Law School, he was, as the Unitarian minister, Civil War veteran, and literary figure Thomas Wentworth Higginson recalled, “placed by birth in the most favored worldly position.” But before he turned his back on Boston’s Brahmin class and became a strident abolitionist, Phillips tried his hand at lawyering. The year after completing his law degree in 1833, Phillips traveled to Philadelphia and New York. While in New York City he somehow met Aaron Burr, who took the time to show the young Phillips the sights of New York.

Not long after Phillips returned home, Burr visited Boston and checked into the Tremont Hotel. Phillips, grateful for the courtesy the enigmatic Burr had showed him in New York, looked him up at the Tremont and took the 78-year-old former vice president to some of Boston’s important sites. One of the first places the two visited was the Boston Athenæum, then located on Pearl Street. The Athenæum, then and now, was renowned for its art collections, and represented a place not to be missed by any elite nineteenth-century tourist. They roamed the handsome rooms, bejeweled with paintings and sculpture. As they meandered down one hall, Phillips, for perhaps the only time in his life, became seized with panic and tried to divert Burr into another room. But it was too late. Like the young Phillips, Burr had already spied the 1791-92 plaster bust of Alexander Hamilton by Giuseppe Ceracchi, which had been modeled from life, and had been in the Athenæum’s collections since 1817.

One can imagine what had been speeding through Phillips’s mind, perhaps feel his racing heart, and what perspiration must have been trickling even from that Brahmin’s constitutionally dry skin. Burr, however, walked right up to the bust, and stood facing it, staring into its all-too familiar face. After a moment, he turned to his young escort and calmly said “A remarkable man—a very remarkable man.” He then, military-like, turned on his heels and completely calm and composed, walked off into history.