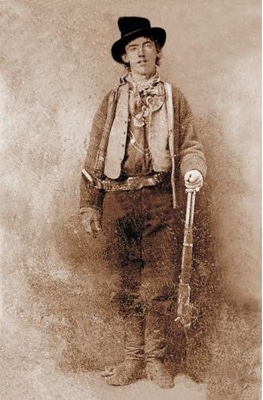 Billy the Kid, just 21 when he was gunned down by Sheriff Pat Garrett in Fort Sumner, New Mexico in 1881, is one of American history’s most famous characters. The charismatic gunslinger and press icon was known to have killed eight men and rumored to have slain over 20. He has been the subject of countless movies, plays, television stories, dime magazines and television documentaries.

The young killer, revolver firmly shoved into his holster, is back again, this time as the star of Must, by Charles Cissel, that opened last week at the theater at St. Clement’s, W. 46th Street, in New York.

Pat Garrett shoots Billy at the end of the one hour play. He should have shot him in the first five minutes and saved everybody in the audience the monotony of the story.

There is much to write about Billy the Kid (real name Henry McCarty or William Bonney). The western legend was born in New York City. He moved around the country with his mother and went out on his own as a teenager. He started his life outside the law with small crimes and then he killed a man and the law began to chase him. The Kid wound up in the middle of the Lincoln County (New Mexico) War of 1878. He killed several men in it and after it, including a sheriff. At this point, writers for western newspapers began to turn him into a man-of-the-people vigilante style hero and he became perhaps the most famous outlaw in the country. Everybody, everywhere, knew Billy the Kid. Sheriff Pat Garrett, caught him and jailed him, but Billy escaped and killed two deputies in a hail of gunfire in the process and was on the lam again. Garret caught up to him and shot him dead in a house in New Mexico on July 14, 1881. This was all great material for a drama.

Yet, playwright Cissel chose to write his confusing and ponderous play about Billy’s last night on earth, just before he met his fate at the hands of Garrett. Oh, the ‘must’ title is from Pat Garrett ‘must’ kill Billy the Kid, or something like that. In the last night, Billy meets the ghost of his mother who is probably glad she died before she would have to see this play about her son. Then he tries to reconcile with his woman, but does not. His father wanders around the desert, where the play is set, maybe looking for another play to step into. Pat Garrett, played nicely by John Clarence Stewart, moves in and out of the desert in long discussions with Billy that go absolutely nowhere.

In the play, the gunslinger is trying to explain to the audience that at just 21 his life is over and he needs to redeem himself somehow, some way. He is such a mental mess that he needs to go on modern a television talk show to explain himself. Unfortunately for him, he ran into Pat Garrett.

At the end of the drama, Garrett shoots Billy dead. For a minute, I thought he missed and we would have to sit through ten more minutes of the aimless story.

The performers in the play do a fine job, but the script is weak. The actors are Stewart as Garrett, Brendan Dooling as Billy, Meredith Antoian as Louisa, Sally Ann Triplett as Catherine and Mark Elliott WiIson as Billy’s dad.

The play is produced by movie star Bruce Willis, who said that the idea came up in conversation with his friend Cissel, a bartender. My God, what were they drinking?