Billy J. Stratton holds a PhD in American Indian Studies and is an associate professor of English at the University of Denver, as well as Special Advisor on Native American Partnerships and Programs. He is the author of Buried in Shades of Night: Contested Voices, Indian Captivity, and the Legacy of King Philip’s War, and more recently contributing editor to The Fictions of Stephen Graham Jones: A Critical Companion, as well as several articles on the theme of Sand Creek.  Follow him on Twitter @BillyJStratton. 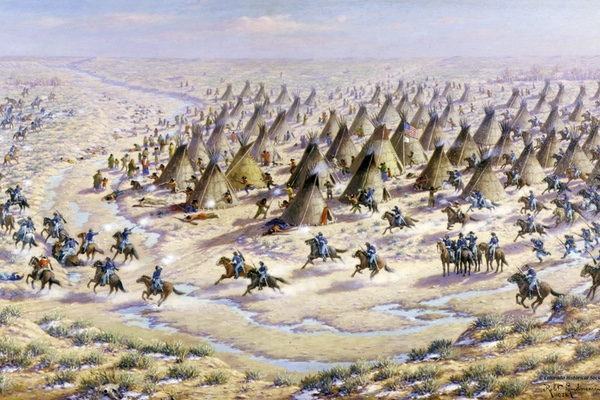 Why did they arrive at different conclusions?

On November 29, 1864, a heavily armed U.S. military force led by US Army Colonel John Chivington attacked a Cheyenne and Arapaho encampment in southwest Colorado Territory. By the time the ensuing massacre had ended the next day, more than 200 people lay dead, mostly women and children who had settled for the winter near the outpost of Fort Lyon under the flag of peace. 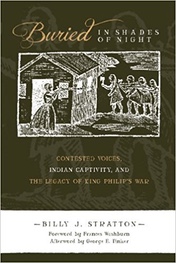 Known as the Sand Creek Massacre, this infamous atrocity took place during the tenure of John Evans, the Colorado Territorial Governor and Superintendent of Indian Affairs whose official proclamations earlier in that year stoked settler hostility, while being integral to the recruitment and organization of the forces that would carry out the massacre itself. A doctor, philanthropist, and friend of Abraham Lincoln, Gov. Evans is also a founder of both the University of Denver and Northwestern University. Until the last few years, however, the association of John Evans with the Sand Creek massacre had gone largely unaddressed at both of universities.

College campuses, as with cities throughout the American South such as New Orleans and Charlottesville, have increasingly become sites of contention and protest over the legacy of a fraught American past and the place of (in)famous historical figures within it. Given the attack at Charlottesville and the subsequent destruction of controversial monuments across the United States, such frictions show no signs of abating and may become even more contentious in the near future.

Over the last years, historical controversies have flared across the campuses of numerous American universities as well. Princeton University, for instance, was pressed to examine the segregationist ideas of Woodrow Wilson as his name is affixed to the School of Public and International Affairs and Woodrow Wilson College. At Harvard, faculty and students successfully challenged the inclusion of the family crest of a prominent slave trader, Isaac Royall Jr., on the official seal of the University’s prestigious law school. Meanwhile, a small group of Marquette students and faculty have long criticized their University’s seal depicting Father Jacques Marquette standing over Native people in a position implying colonial dominance.

Within this context, Northwestern University and the University of Denver are not unique. Under pressure from Native students and members of the Chicago Native community, in early 2013 the administration of Northwestern University appointed a committee to address Evans’ role in the massacre, and any financial benefits that it may have produced. Their report was completed in May 2014.

At the University of Denver (DU), a small group of concerned faculty including myself formed an ad-hoc committee and shared plans with administration to produce their own scholarly report on the matter. That some committee members were already engaged in efforts to address Sand Creek and the difficult questions related to Evans’ connection, allowed this group to be proactive and responsive in advance of the 150th anniversary of the massacre, which also happened to corresponded to DU’s sesquicentennial.

Aside from the initiation of a faculty-driven approach, the DU committee insisted on the involvement of Native students. The DU Evans Study Group also invited the active participation of those most affected by the massacre itself, representatives from the Arapaho and Cheyenne communities, which included participants from Wyoming, Montana, Colorado, and Oklahoma.

While the Northwestern report condemns John Evans for his “deep moral failure,” the committee ultimately exonerated Evans of responsibility for the massacre itself. On this crucial point, the committee seems to have failed in fully considering the impact of Evans’ influence and authority on the events, opting for the well-worn defense that “he was a representative figure who believed in and lived out the dominant ideas of his era” -- a conclusion that elicited criticism from Northwestern Native students and the broader community.

The report completed by scholars at the University of Denver in October 2014, by contrast, went further and concluded that John Evans shared in the responsibility for the massacre because he was instrumental in creating the climate in which it occurred. In addition to its role in encouraging a more nuanced and culturally inclusive understanding of John Evans and the historical context of DU’s founding, the impact of the report has gone well beyond campus. Its social and historical impact was made manifest on December 3, 2014 when Colorado Governor John Hickenlooper issued an official apology on behalf of the state of Colorado for the massacre, and in which he cited DU’s report on Evans as critical to the decision.

The faculty-initiated approach that typified the efforts at the University of Denver certainly came with its share of challenges and tensions. Nonetheless, it was facilitated by an institutional environment whereby inclusivity, a respect for academic freedom, and the existence of supporting academic and administrative resources served as catalysts for the contribution by faculty to the fuller realization of DU’s institutional mission in advancement of the public good.

While few could have anticipated that the report produced would have such an historical impact, one that marked a powerful moment of healing for Arapaho and Cheyenne descendants of the massacre, the true measure of achievement in all such endeavors is not just in the striving, but also an institution’s climate and an intentionality to cultivate such striving.

The cases at Princeton, Harvard and Marquette, and others at Georgetown, Yale, and UMass-Amherst, speak to a systemic neglect within the structures of higher education of the experiences of marginalized peoples and the broader legacy of the status of historical truth.

As difficult as it might be to confront the difficult truths and traumas of the past in such a heated political environment, that such questions are being raised signals a growing effort to create a more inclusive sense of a shared American history, one that necessitates the consideration of nuanced and multi-vocal approaches to historical events, along with a more pronounced awareness of the complex relationship between past and present, as well as the future.

And this certainly isn’t to imply that such work is complete, or that dedicating resources to new scholarships or programs, regardless of the sums involved, can provide the solution to this and other such historical legacies. In the absence of a collaborative intellectual environment, however, in which the principles of scholarly inquiry and academic freedom are valued and protected, the responses will always tend to be reactive rather than proactive, and produce effects that will largely be of isolated effect, rather than being generative of an engaged process that is innovative and truly transformational.