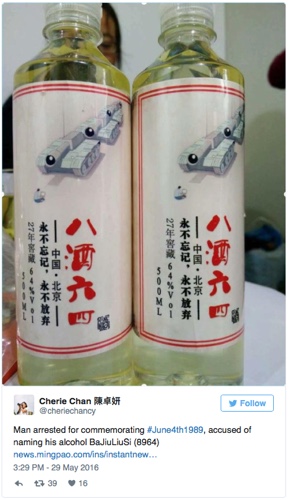 Nearly 27 years later, the carnage of June 4, 1989, remains a raw political scar in China. So raw that a man has been detained on subversion charges, his supporters say, because he shared pictures of liquor bottles labeled to mark the day soldiers extinguished democracy protests based in Tiananmen Square in Beijing.

The man, Fu Hailu, an itinerant worker in Chengdu, the capital of Sichuan Province in southwest China, was formally detained by the police on Sunday on suspicion of “inciting subversion of state power,” according to human rights websites that follow cases in China, including Canyu.org.

Mr. Fu’s wife, Liu Tianyan, said by telephone on Monday that she was unsure whether her husband had anything to do with the macabrely humorous images. They included a beer bottle with a label showing a man sitting in front of a column of tanks — echoing an iconic image of public defiance of the armed crackdown in 1989.