3 Ways Presidential Debates Can Get Back to Their Roots

by David B. McLennan

David B. McLennan, Ph.D. is a visiting professor of political science at Meredith College in Raleigh, NC. 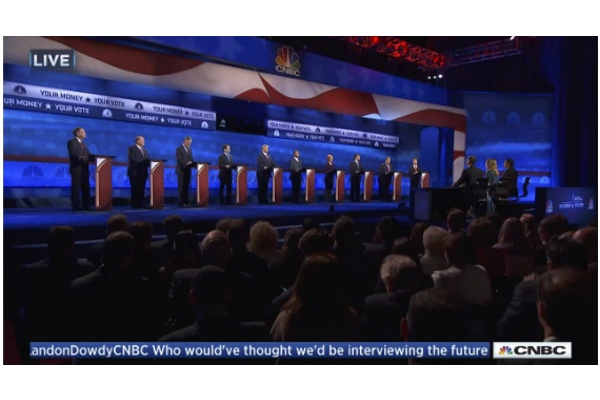 The fallout from the most recent Republican debate hosted by CNBC was predictable. Now, the NBC family of networks may lose the ability to host future debates, while Republican candidates scored points with their base constituents by attacking the media.

But the real loser on Wednesday night was the American people. Unless we rethink the essence of political debates, we are going to end up less informed about substantive policy positions and more cynical about how we choose our nation’s leader.

Let’s be serious, these are not debates. Academic debate, like that established by the Oxford University Union and practiced by college and high school students around the country for decades, is designed to make the debaters smarter. Does anyone seriously think that the debate prep used by Democratic and Republican candidates for president has caused them to learn more about the issues facing the country?

Political campaign debates in this country started as an attempt to educate and persuade Americans about an issue dividing the country—slavery. The 1858 Lincoln-Douglas debates gave the candidates for the US Senate from Illinois extensive time to develop their arguments for and against this issue.

What have Americans learned from the 2015 debates so far? Donald Trump is rich. Hillary Clinton has changed her position on key issues. Marco Rubio is from modest circumstances. Bernie Sanders wants us to stop talking about email.

Worse yet, the skills needed to do well in contemporary debates have nothing to do with presidential leadership. Debates reward style over substance as debaters give snappy answers instead of reflective ones. The entire goal for contemporary debates is for an individual to tear down an opponent, instead of working on solutions with someone with different policy positions.

It is unlikely than any of the four titans on Mt. Rushmore would have made it through the primary process if they had to slog through today’s contemporary debates.

Before debates devolve even further, we need to make substantive changes:

Change the format of the debates—the current debate format of having as any as ten candidates on stage competing for the opportunity to talk for one minute about silly or substantive issues must be transformed. Let’s go back to the Lincoln-Douglas model of having two people with fundamentally different policy positions debate for an hour. Watching Bernie Sanders and Hillary Clinton debate Wall St. reforms for an hour or Rand Paul and Lindsey Graham debate military intervention against ISIS would be both good viewing and a test of how each person would think about issues and lead on them.

Get rid of all moderators—Fox News’ Megyn Kelly and CNBC’s John Harwood are not only a distraction, but unnecessary for true debate. Changing the format to a series of single-issue debates featuring two candidates at a time only requires a referee to make sure the candidates follow time limits and don’t get off subject. Someone like veteran NFL referee Ed Hochuli would be a great choice. Even Donald Trump would be intimidated by Hochuli’s stern admonitions.

Change how public opinion and networks influence campaigns—the Republican debates have demonstrated the limits of public opinion polls. Using a series of national polls 12-15 months before the 2016 election to select candidates to be in the main and undercard debates is absurd, especially when polling margins of error makes the determination of each lineup scientifically invalid. Public opinion polls can continue to play a role in political debates, but only in determining the topics for the single-issue substantive debates. Polls are pretty reliable and stable when they seek to determine which issues Americans find important.

Political debates can be an important part of the campaign process in this country and help voters make informed choices about candidate’s policy positions and leadership skills. Unfortunately, current debates may yield a president whose abilities and ideas are not what Americans thought they were getting.