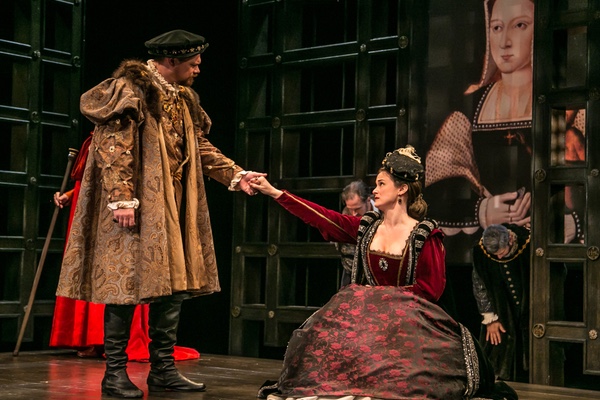 Shakespeare’s Henry VIII, one of England’s most colorful stories, is rarely produced in the United States, but the Shakespeare Theater of New Jersey is tackling it. They had their work cut out for them because Henry VIII is several stories told at the same time, each with its heroes and villains and each soaked in pageantry. The story tells, at the same time, the story of England at its best and worst.

Henry, one of the Tudor Kings, who ruled for nearly the first half of the 16th century, has a big problem. His wife, Katherine, cannot bear him a son. So he tries to get rid of her. This involves massive plots and an intercontinental fight to gain approval of the Catholic Church, which finally arrives -- sort of. At the same time, he deals with his religious and political comrade, Cardinal Thomas Wolsey, a political trickster who would have been right at home in the Nixon Administration. While all of this is going on, Lord Buckingham gets sent to the Tower of London, a leading religious figure almost joins him and beautiful young Anne Boleyn, whose days we know are numbered, glides into the King’s life across a dance floor. Henry deals with foreign policy and alliances with European nations at the same time, struggling to become a great world leader and, somehow, have a male heir.

Director Paul Mullins has cut some scenes and characters to speed up the action in the usually lengthy play, which has a complicated plot filled with numerous twists and turns. The longer version is hard to grasp and the trims help. The play still runs two and a half hours and the front part of it could be cut some more. When the story gets going, near the middle of act one, it is a good one, filled with animosity, triumph and tragedy, anchored by England’s most famous King and his first two wives, neither of whom winds up as a happy camper.

The production at Drew University is pretty good, despite a slow and tedious start and some jumpy scenes in the latter part of the second act. Director Mullin does what he can with a weak theatrical structure and a story in which Anne Boleyn, one of history’s most tragic figures, becomes a bride but not yet a victim.

At times, Henry VIII soars, such as in the historical political maneuvering that goes on in court and when the King’s first wife, Katherine, begs to remain at his side after she winds up in a political fracas. There are moments of overt deception and others of devilish backstairs duplicity that could have been written about any palace or any Democratic seat of government in any era.

Mullins gets tremendous acting from his stars. David Foubert is as majestic as majestic gets as the King. He is a vision of power as he struts about the stage, either with his wives, the Cardinal or Dukes from around his kingdom. He is clearly going to get what he wants and nobody, not the British enemies or even the Pope, is going to stop him. Philip Goodwin is equally sensational as Cardinal Wolsey, especially in second act monologues. He is an old and battered man who is being pushed off the political stage and he does yet understand why. His laments are wonderful. Just as good is Jessica Wortham as Queen Katherine. She is full of bluster and carries on wonderfully in her pleas to stay in court. She whirls, she twirls, she points fingers and flings her hands into the air. She steals the play in the first act. Other good performances are from Thomas Michael Hammond as the Duke of Buckingham, Eric Hoffman as Lord Sands and Katie Wieland as Ann Boleyn.

The play looks regal. The actors are dressed in lush costumes and a wedding scene is right out of the movies. The play is staged on an odd set, though. It looks more like a 1970s television room than a 16th century palace.

This history play was Shakespeare’s last work. It was first performed in 1613. John Fletcher reportedly worked with Shakespeare on the script. The two were as shaken as everybody else when the old Globe Theater in London burned down during the run of the play.

Shakespeare’s story of Henry VIII is pretty accurate, although the playwright does move events around in history and takes some liberty in portraying the personalities and motives of some characters in the work. Henry was just a teenager when he became King after the death of his father, Henry VII, and ruled for 38 years. He is most famous for his six wives, two of whom he had beheaded. He was also notorious for executing or imprisoning political foes and running England with an iron fist. He merged England and Wales and separated England from the Catholic Church, running the Church of England himself. By his early 30s, he was one of the most powerful rulers in Europe.

Shakespeare was as fascinated with him as everybody else and his play, just sixty some years after Henry’s death, was his closest real life history play. Many people in his audiences were alive when Henry VIII reigned.

Henry VIII has its problems, particularly in its slow moving first half hour, but, in the end, it is a reasonably sturdy drama and an historical study of the ever-engaged and always in trouble Tudors (oh well, Henry’s daughter, Queen Elizabeth I, turned out all right).