Joshua Holland is a senior digital producer for BillMoyers.com. He’s the author of "The Fifteen Biggest Lies About the Economy (and Everything Else the Right Doesn’t Want You to Know about Taxes, Jobs and Corporate America)" (Wiley: 2010), and host of Politics and Reality Radio. 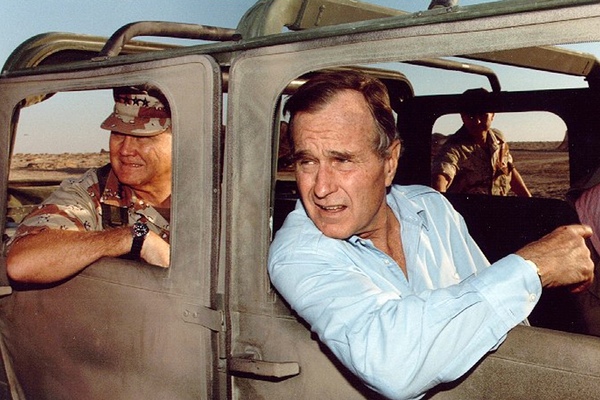 Polls suggest that Americans tend to differentiate between our “good war” in Iraq — “Operation Desert Storm,” launched by George HW Bush in 1990 — and the “mistake” his son made in 2003.

Across the ideological spectrum, there’s broad agreement that the first Gulf War was “worth fighting.” The opposite is true of the 2003 invasion, and a big reason for those divergent views was captured in a 2013 CNN poll that found that “a majority of Americans (54%) say that prior to the start of the war the administration of George W. Bush deliberately misled the U.S. public about whether Baghdad had weapons of mass destruction.”

But as the usual suspects come out of the woodwork to urge the US to once again commit troops to Iraq, it’s important to recall that the first Gulf War was sold to the public on a pack of lies that were just as egregious as those told by the second Bush administration 12 years later.

The Lie of an Expansionist Iraq

Most countries condemned Iraq’s 1990 invasion of Kuwait. But the truth — that it was the culmination of a series of tangled economic and historical conflicts between two Arab oil states — wasn’t likely to sell the US public on the idea of sending our troops halfway around the world to do something about it.

So we were given a variation of the “domino theory.” Saddam Hussein, we were told, had designs on the entire Middle East. If he wasn’t halted in Kuwait, his troops would just keep going into other countries.

As Scott Peterson reported for The Christian Science Monitor in 2002, a key part of the first Bush administration’s case “was that an Iraqi juggernaut was also threatening to roll into Saudi Arabia. Citing top-secret satellite images, Pentagon officials estimated in mid-September [of 1990]  that up to 250,000 Iraqi troops and 1,500 tanks stood on the border, threatening the key US oil supplier.”

A quarter of a million troops with heavy armor amassed on the Saudi border certainly seemed like a clear sign of hostile intent. In announcing that he had deployed troops to the Gulf in August 1990, George HW Bush said, “I took this action to assist the Saudi Arabian Government in the defense of its homeland.” He asked the American people for their “support in a decision I’ve made to stand up for what’s right and condemn what’s wrong, all in the cause of peace.”

But one reporter — Jean Heller of the St. Petersburg Times — wasn’t satisfied taking the administration’s claims at face value. She obtained two commercial satellite images of the area taken at the exact same time that American intelligence supposedly had found Saddam’s huge and menacing army and found nothing there but empty desert.

She contacted the office of then-Secretary of Defense Dick Cheney “for evidence refuting the Times photos or analysis offering to hold the story if proven wrong.” But “the official response” was: “Trust us.”

Heller later told the Monitor’s Scott Peterson that the Iraqi buildup on the border between Kuwait and Saudi Arabia “was the whole justification for Bush sending troops in there, and it just didn’t exist.”