Victor Davis Hanson is a senior fellow at the Hoover Institution and the author, most recently, of The Savior Generals. 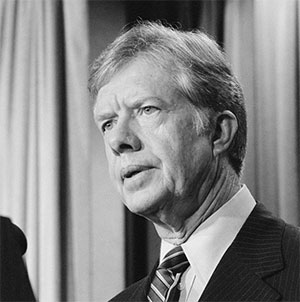 The final acts of the Obama foreign policy will play out in the next two years. Unfortunately, bad things happen when the world concludes that the American president has become weakened, distracted, or diffident about foreign policy.

As Richard Nixon became increasingly paralyzed by Watergate in late 1973, the enemies of Israel felt that it was an opportune time to launch their so-called Yom Kippur War. The next year, the negotiated armistice in the Vietnam War collapsed, and the North Vietnamese seized the Mekong Delta and prepared for a final offensive against South Vietnam.

In 1979, after two full years of Jimmy Carter’s reset foreign policy — and after the president’s “malaise” speech and the surreal attack by the aquatic rabbit — various risk-takers concluded that the United States had decided that it either could not or would not intercede against aggression. In short order, the Chinese invaded Vietnam; the Sandinistas seized power in Nicaragua, and Central America descended into a Communist miasma; the Iranians took U.S. hostages in Tehran; terrorists stormed Mecca; the Soviets invaded Afghanistan — and, after that last event, President Carter confessed that he had undergone “a dramatic change in my own opinion of what the Soviets’ ultimate goals are.”

Sometimes lame-duck presidents understand that they are perceived as weak or under siege — and yet can recover with resolute action. Iran–Contra by early 1987 had almost fatally damaged Ronald Reagan. But he rallied to negotiate with Gorbachev and promote policies that would lead to the fall of the Soviet Union. By late 1998, Bill Clinton was facing impeachment over the Monica Lewinsky scandal, but a strong economy and his insistence on intervening in the Balkans against resurgent Milosevic forces saved his presidency. Despite Katrina, the disastrous 2006 midterm election, and popular opposition to the Iraq War, a weakened George W. Bush rallied to save Iraq through the surge and to cobble together punitive measures against Russia after the invasion of Georgia.

We are on such a precipice now, as the perception grows that Barack Obama is mired in scandal, an economy that has been stagnant throughout his tenure, and a disastrous foreign policy. It does no good to speculate whether critics at home are right in thinking that Barack Obama is “weak” in his foreign policy. Nor is there any point in arguing whether Obama believes that the U.S. is exceptional only in the relativist sense that Greece believes it is exceptional, or whether, as he stated more recently, he believes the U.S. is exceptional in absolute terms “with every fiber of [his] being.” ...