A week ago today, twelve strangers showed up at George Mason University and in five days, going at it around the clock, as humanities people often do, they created a new digital humanities research tool. With almost every day seeming to offer yet another news piece questioning the value of the humanities, One Week | One Tool (OWOT) offers a tangible answer. Funded by an National Endowment for the Humanities grant and organized by the Roy Rosenzweig Center for History and New Media, OWOT created Serendip-o-matic, a “serendipity engine” that searches for “unexpected connections between the material you already have at hand, and the universe of sources beyond your fingertips.”

Serendip-o-matic works transparently. The user enters text, sees keywords extracted, then thumbnail images, items, and documents culled from archives (initially Digital Public Library of America (DPLA), Europeana, and Flickr Commons). Options include a click through to reveal the sources used to generate results. Serendip-o-matic relies heavily on the geez whiz factor. Based on “distant” searching, akin to “distant reading,” it “delivers what you don't know you're looking for.“ That sense of discovery is meant to mimic an experience familiar to those of us who can still recall browsing stacks or flipping through archival boxes labeled ephemera, that aha! moment when you stumble on an unexpected find. And just as wandering down an aisle in a library, my eye would never be drawn to the same bindings, Serendip-o-matic works like a kaleidoscope endlessly shuffling and reshuffling results so that the output is never exactly the same for the same keywords.

The tag line “let your sources surprise you” refers to perhaps the most immediately useful application of Serendip-o-matic, the ability to link to a user’s Zotero account. I had the dubious honor of triggering a sought after 500 error for the team when I first tried to link my zotero account. I finally got it to work. Serendip-o-matic pulls from the twenty-five latest entries to Zotero which in my case include Serendip-o-matic itself as well as Stanford’s Named entity extraction software, and some database searches The keywords seemed accurate.

The maximum number of sources returned is theoretically twenty, but my playing with Serendip-o-matic resulted in fewer returns, often with duplicates.

The results seemed a little bizarre at first glance. If the database glitches in pulling a thumbnail it returns a graphic of a mustachioed hippo. 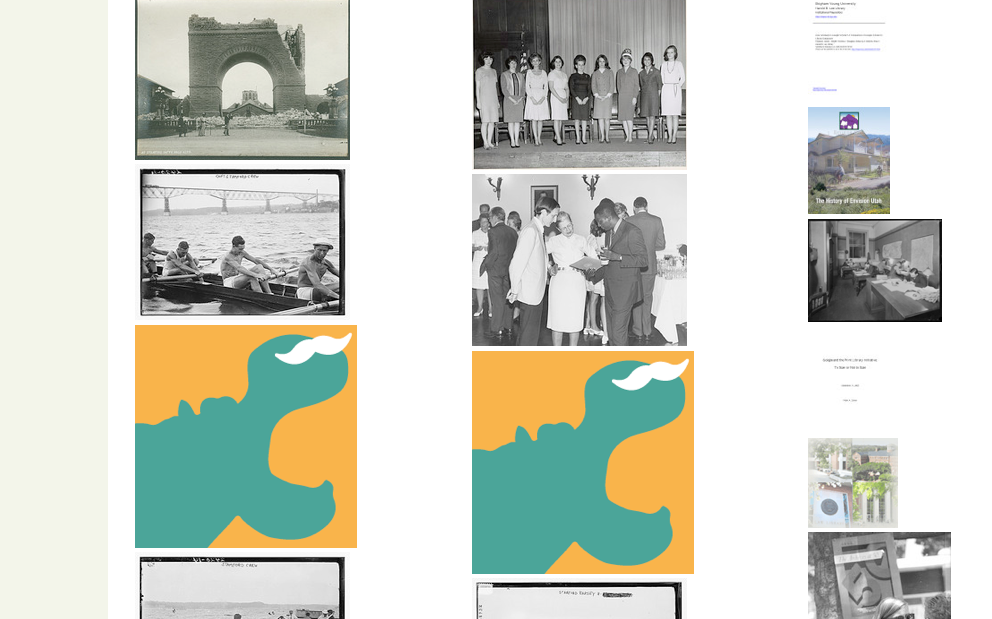 However clicking on the thumbnail reveals the correct sources. That Serendip-o-matic still glitches should not detract from the OWOT team’s accomplishments. Anyone who has beta tested software or websites knows many iterations occur before the kinks are worked out. The somewhat limited archives searched means the results are very “big picture.” My favorite came from the U.S. National Archives: 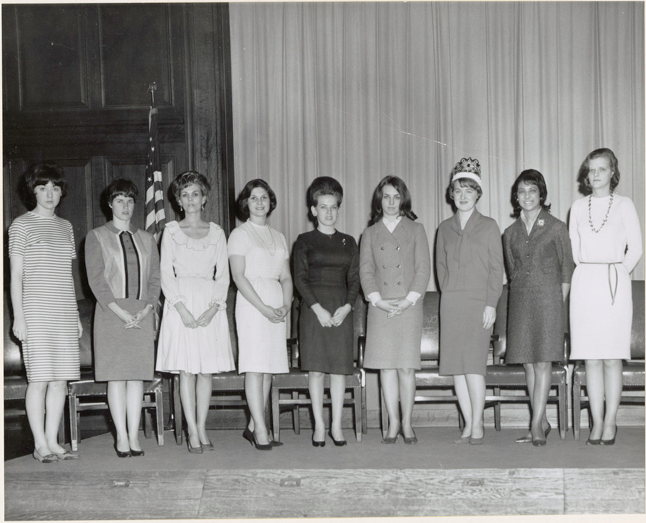 However, the concept is excellent and with expansion to additional repositories will only get better. And with an eagerly anticipated release by late Friday (twitter archive of #OWOT), the digital humanities community began doing just that. In fact, within hours of its launch, Tim Sherratt extended code to include one more archive, Trove Australia.

Because “OWOT is largely about process over product,” the blogs of the participants offer useful information about how to solicit project ideas from a larger community, winnow to one, then program, design, document, and promote a tool. Four of the team members blogged daily offering fascinating glimpses into what has been described as digital humanities’ reality show. 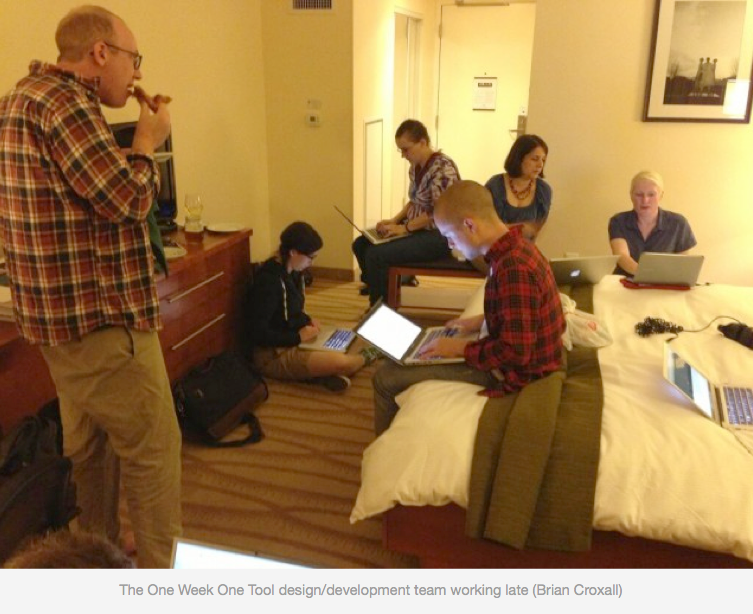 Mia Ridge wrote about the rapid trust that develops in such intense situations, and the joy of working on something you love in the company of other scholarly-inclined people. Amrys O. Williams reflected on “being a part of a community of people who are different from me but who share my interest in harmonizing their humanistic and their technical sides.” Brian Croxall copped to how the short intense experience requires both checking egos at the door but also owning your expertise. Jack Dougherty shared his hilarious “Peggy Olson” moment as he was pushed to extend his academic writing skills into the unfamiliar terrain of copywriting.

OWOT worked as three teams , project management, dev/design and outreach, and consisted of an admirably diverse group in terms of gender, career status, and representation of different fields in the digital humanities, I only wish it were as diverse ethnically. Based on the team photograph it appears pretty homogenous. 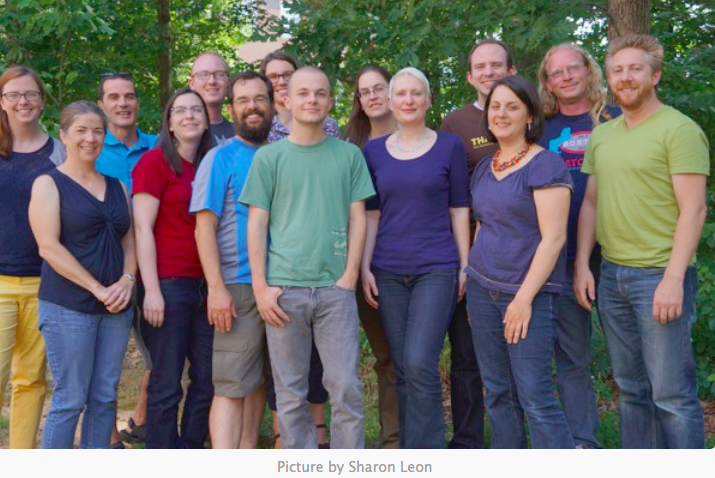 The inclusion of a high school librarian and museum professionals alongside graduate students and professors points to one of the great strengths of digital humanities, the ability to bridge in meaningful and significant ways various communities. This diversity of perspectives is evident in Serendip-o-matic’s search for images and objects, as well as texts. Development/Design team leader Mia Ridge explained “we wanted it to be a rich, immersive experience so images were key, but we wanted a good mix of docs, images, objects.”

The Future of Digital Humanities

While OWOT is billed as a Digital Humanities Barnraising, Serendip-o-matic’s feel is more midcentury than nineteenth, from the turquoise color scheme to widgets gone wild in the logo. Designer Amy Papaelias described the visual identity as “Jetsons meet Rube Goldberg” meant to capture both “playful and retro” feel of the tool’s name.

This pull of the past reflects the awe that still inheres to the automation of work done by machines (see also the home page tongue-in-cheek references to “magic” and “marvel”). That mid-century vibe carries more than a whiff of nostalgia. As project co-director Brian Croxall explained, the ability to search online means we “miss the surprise of finding that unexpected book in the stacks or that item in the archives.”

Given that nostalgia, it’s interesting to compare Serendip-o-matic to the result of the first OWOT. While the 2010 team created Anthologize. a tool to turn a blog into a book, the 2013 teams tool reflects the more recent fascination with distant reading, moving away from the object of the book to use machines to extract words the user might never select to rummage in archives into which the user might never go. When I explain why I think digital humanities are more than a passing fad, I argue the tools allow me to do what historians do only bigger. Serendip-o-matic builds a significant bridge towards future digital humanities scholarship by doing just that.